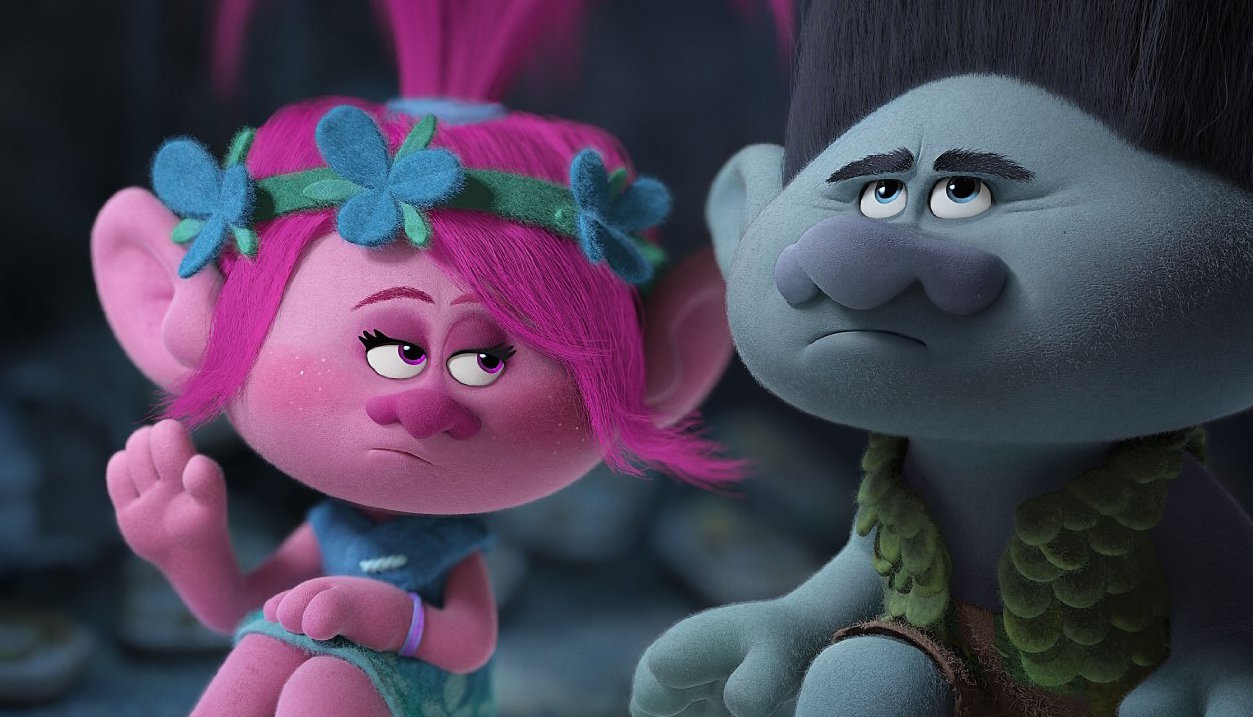 We all remember the funny little Troll dolls from when we were kids. Each one had a fugly little smashed face, big ears, round belly, no genitalia and giant head of glorious neon-colored hair that little girls braided over and over again until the fibers fell out. These little mystical creatures made out of plastic have been enchanting children ever since their creation in 1959.

Now, Dreamworks has a new animated film called Trolls, that will not only delight a new generation of youngsters with its disco music, psychedelic colors and positive message, but also represents the latest installment in the ever-evolving princess-movie category. We sat down with Trolls screenwriters, Jonathan Aibel and Glenn Berger, to get more in depth on creating the Princess Poppy (Anna Kendrick).

Many people familiar with the fairy tale movie genre agree that we are currently in the third generation of animated princesses.

The first generation came from Disney and included Snow White and the Seven Dwarfs (1937), Cinderella (1950), and Sleeping Beauty (1959). This princess archetype reflected the beauty and social ideals of the time period: the women were beautiful with gorgeous hair, a waif-like physique and in serious need of a knight in shining armor to save them.

Post feminism, the second generation of movie princesses gave us the gorgeous ginger-haired Merida in Brave (2012), no longer the damsel in distress, she’s the skilled archer who doesn’t want to get married, along with the lovely Elsa in Frozen (2013), a fearless young woman with a strong independent spirit and powerful dark secret who turns to other women, not men, in her time of need.

Berger considers the second generation to be, “Basically, a gender-neutral princess story, where anything a boy can do, a girl can do.”

But in 2016, princesses are starting to morph again. Keeping their strength, they are perhaps reconnecting with their femininity, but not in ways defined by the male gaze. Princess Poppy in Trolls breaks physically with the typical princess stereotype.

“Poppy has an improbable physique but in a different direction. She’s kind of stumpy with a giant head and cankles,” says Berger.

Poppy also has a cone-shaped shock of hot pink hair and her non-traditional crown is made of felt flowers, not diamonds.

Though the writers weren’t in charge of Poppy’s appearance, they were responsible for who she was on the inside. Considering both Berger and Aibel have daughters, they wanted to get Poppy just right.

“From a writing perspective, it was a delicate balance. Jon and I were trying to thread a needle to make Poppy both naïve and hopelessly optimistic at the same time at the beginning of the movie so she had a character arc, a place to go by the end of the movie, where her optimism is tested by reality. By the end of the movie, her positivity has been tempered by life experience. That was important for the arc of the story,” says Berger.

But when the writers started seeing the story reels, they began to have some anxiety over the character they created.

“When it was up on its feet, we started worrying that in act one, Poppy was playing maybe too naïve, too dim. So in all the rewriting through the years, the biggest thing we were doing was trying to make sure her positivity and optimism didn’t make her seem stupid. We had to engineer scenes in which she had just enough encouragement along with way to make it clear that she had a point of view, was realistic and intelligent enough in her dealings with other people, yet ultimately she led a sheltered existence,” added Berger.

Once they got Poppy correctly set up in act one, they began to look at act two.

“The story over the course of act two challenges her to grow and learn that some of her optimism was a little naïve,” says Berger.

Aibel wants to make it clear that any character is subject to this kind of scrutiny, saying,  “You could look at Poppy as any movie character, princess or not, who doesn’t yet know what he or she is capable of, because he or she hasn’t been tested yet. So she may be royalty and next in line for the throne, but she believes she has all the skills necessary – she can sing, she can dance, she can scrapbook because that’s what the Trolls are about. Then she finds out that the true skill she has, to be a great leader, is inside her. The adventure shows her that, along with her father, the other Trolls and the Bergens, too.”

For all these reasons, Berger thinks Poppy is forging the third generation of princesses. “What I think this movie is doing, is saying, ‘Now that we have cool female leads in these movies, it’s okay to have princesses be flawed again.’ We had to come up with a new flaw that doesn’t make our princess weak, so much as ‘I’m a sheltered princess who’s suddenly in the position where I have to lead and can I do it?’ So she has self-doubt, naïveté.”

Both writers think it’s a good move to abandon the importance of physical appearance in princesses, shunning the idea that beauty is a virtue.

What Can You Learn From Reading Produced Screenplays

3 Replies to "Trolls writers tackle the fugly princess of tomorrow"