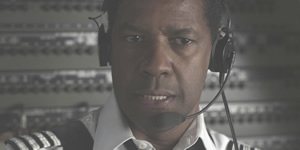 “I got sober when I was 25,” screenwriter John Gatins tells ScreenwritingU in a very personal one-on-one interview about his new drama, Flight, the story of a pilot who saves the lives of everyone on his plane only to be questioned about his own state of sobriety while flying.

Gatins uses his experiences with addition to mold the character of Whip Whitaker, played by Denzel Washington.  Maybe that’s why, he says, this script has been his “own personal Rubik’s Cube” of a project.

He picked the script up and put it down several time for more than 10 years before the film became a reality. And, this is the first time Gatins has spoken out about his addition. He had opportunities in the past, he says, but he’s a very private person. It wasn’t until recently on this press tour for Flight that the actor-turned-screenwriter told his story of getting sober. “It’s not a comfortable issue to offer up in a few minute interview,” he says.

It just wasn’t the model for the Hollywood blockbuster. So, how was he going to attract agents and actors to his script, let alone someone like

Many times throughout the process, Gatins says, he thought to himself, “This is killing me. This thing is killing me.”ScreenwritingU sat down with the writer to get the story on how getting sober spawned the script of a lifetime.Denzel Washington? Persistence. That’s the only way.

The Avengers - An Interview with Screenwriter Zak Penn