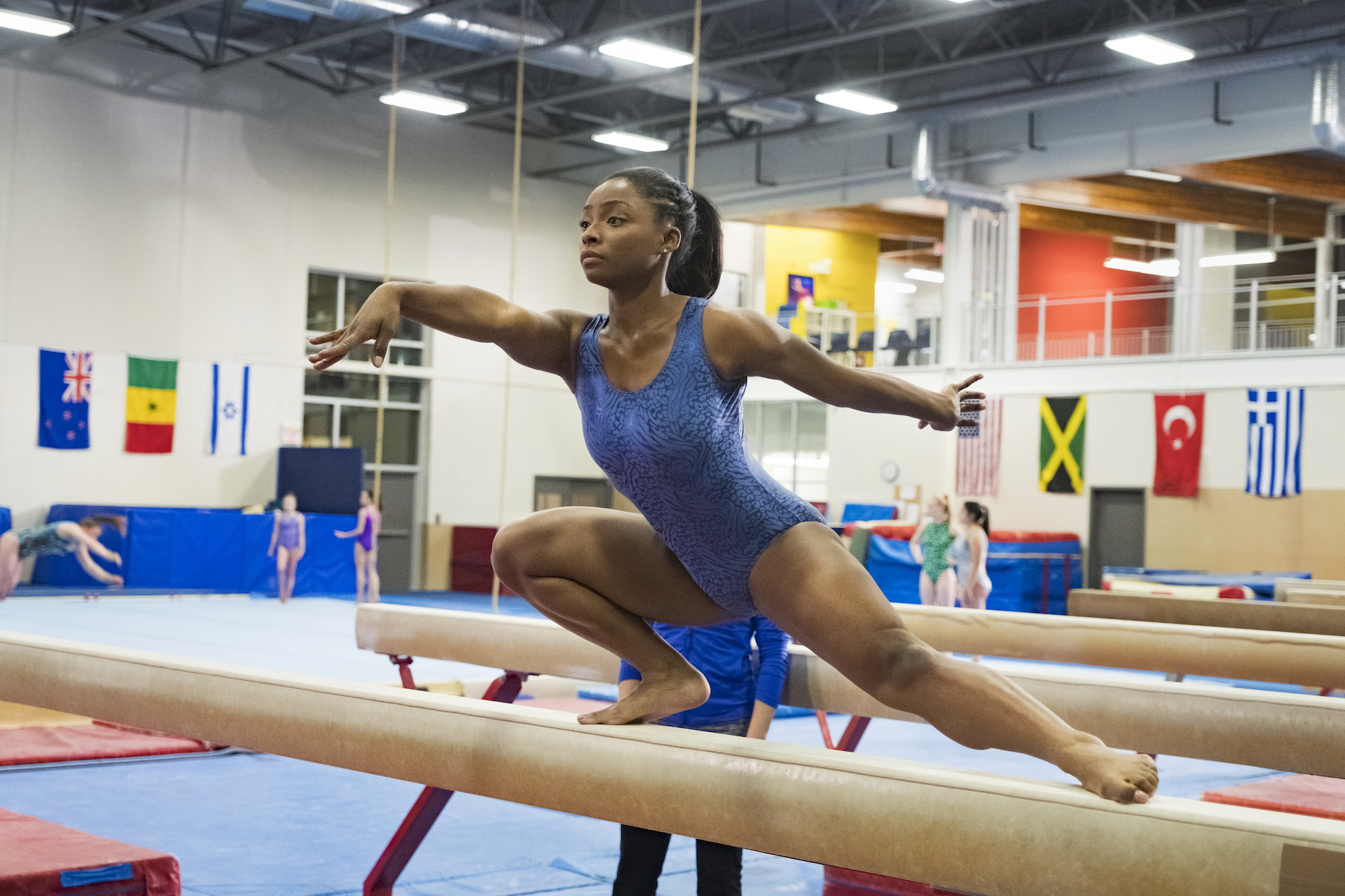 The new Lifetime movie, The Simone Biles Story: Courage to Soar, is based on Biles’ autobiography from 2016. The biopic details the hardships and sacrifices Biles, played by Jeanté Godlock, made on the road to winning a combined total of 19 Olympic and World Championship medals, making her one of the greatest gymnasts of all time.

In addition to Biles’ book, writer Kelly Fullerton (Awkward, The Fosters), was given access to the actual Biles family. Fullerton says those meetings and phone calls really sparked her creativity. “The Biles family is so close and I’m close with my family, too. I became enamored with this idea that her parents were such a great source of constant support. They’re her biggest cheerleaders, but they’re also not afraid to push her when she needs a little push. I was so inspired by their relationship and Simone’s commitment, not only to be a great gymnast, but to rise up when she was struggling. She’s not someone who stays down.” Fullerton became interested in writing as an undergrad but it was attending the UCLA Graduate Television Showrunner Track where she really honed her skills. There, her focus was on television, learning to write half-hour and one-hour shows. But she also managed to write a feature screenplay she calls a “dramady”. The script made it into the hands of literary manager Robyn Meisinger at Madhouse Entertainment, who showed it to one of her clients, Lauren Iungerich, the showrunner of MTV’s Awkward.

“I didn’t expect anything to come of it, but Lauren really responded to the material and I got my first job on Awkward right after I graduated in 2010.

Fullerton was thrilled to write the Simone Biles movie for TV. But the story did have its challenges.

“There was not a natural low point. Simone got to a certain point in her career where she never really lost again. As I looked for an arc, I realized she found success and continued on this trajectory of success.” Normally, the writer would invent a low point at the end of the second act, but when you’re telling the story of someone who’s still alive, it becomes impossible. Fullerton had to get deep with Biles.

“We had to talk about where she was emotionally. How when all the pieces come together, you feel a tremendous sense of pressure. People might be rooting against you because you are so successful. It was a challenging time for her.”

So instead of some tragic event – in most sports movies it would be a defeat – Fullerton relied on the emotional challenges Biles faced.

“It’s weird when you’re putting low points into someone’s life!” she said with a laugh.

The film’s director, Vanessa Parise (The Unauthorized Beverly Hills 90201 Story, #PopFan) also found making the film challenging ­ – but in different ways. From the beginning, she knew casting would be difficult.

“Finding someone to play Simone Biles,” says Parise, “and finding a stunt double for Simone, were extremely challenging. We needed someone to match Simone physically, to have some modicum of her elite gymnastic skills, and to be able to act!” Luckily, she found Jeanté Godlock, who’s not only talented, but also has an acrobatic background. She even looks a bit like Biles.

But as far as the stunt double, “We ended up having to bring in three different stunt women, and split the work according to their strengths. We intercut real footage from the competitions – even the Worlds and the Olympics – with our actress as well as our stunt doubles. See if you can tell!” says Parise.

Even though filming is over, Biles’ story continues. With the recent headlines about the tragic molestation of at least 150 female gymnasts by Dr. Larry Nassar, now sentenced to 40 to 175 years in prison, it’s incredibly sad to discover that Biles was also a victim.

On January 15, she released a statement on Twitter indeed identifying herself a “survivor.” We asked Fullerton if she had any idea about this difficult part of Biles’ life.

“I didn’t know anything about it. It was heartbreaking to hear. She didn’t mention it in her book, and we stayed very close to the book. I don’t think she was ready. I absolutely respect that. In her life, I think it’s an event that doesn’t define her. It’s a horrible thing that’s happened to her, but her sense of self was not diminished or taken away.”

Director Parise was also devastated by the news, saying, “I was shocked to hear the disturbing statements by 156 young women last week against Larry Nasser. I certainly stand with Simone and the other gymnasts. I applaud their courage and their strength to stand up and confront this sexual predator as well as the systems which have failed to hear them. These young gymnasts are an inspiration for all women to stand together and demand change in our culture. We demand that our (female) voices be heard.”

The good news is that the Biles family have seen the movie and give it two thumbs up, according to Fullerton. “They felt it really represented them. They really liked it.”

10 Tips for Networking at the Sundance Film Festival