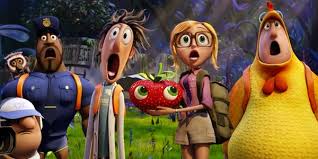 CLOUDY WITH A CHANCE OF MEATBALLS 2 Screenwriters Chat with ScreenwritingU

How do you go from writing a hard R-rated film like Horrible Bosses to PG-13 magic movie like The Incredible Burt Wonderstone to an animation film with walking food? Very carefully, says Cloudy With a Chance of Meatballs 2 screenwriters John Francis Daley and Jonathan Goldstein.

“The process in animation is obviously very different from anything we’ve ever done in live action,” says Goldstein. “It’s an ongoing, constantly changing, highly-collaborative thing.” Sometimes the writing duo would work on a sequence that they would then see animated while they were writing the next section of the film.

“When you’re writing live action, you typically don’t get to know how it’s going to look until you’re in production,” says Goldstein.

There are pros and cons to this kind of writing. The pros: writers get to collaborate much more with the production staff. Cons: the rewriting almost never stops.

Cloudy With a Chance of Meatballs 2 is the sequel to the 2009 movie of the same name.

In the first film, an inventor creates a machine that converts water into food. Sounds like a great idea, right? Until it starts to rain. When sporadic weather causes too much food production, the inventor’s town is left to deal with the consequences of giant food.

In this sequel, a very ambitious business tycoon – think Steve Jobs meets Virgin group mogul Richard Branson – decides our hero the inventor could be very useful to his company as well. Let the adventure unravel.

"How I got 72 Script Requests!" With Screenwriter J.T. Quinn