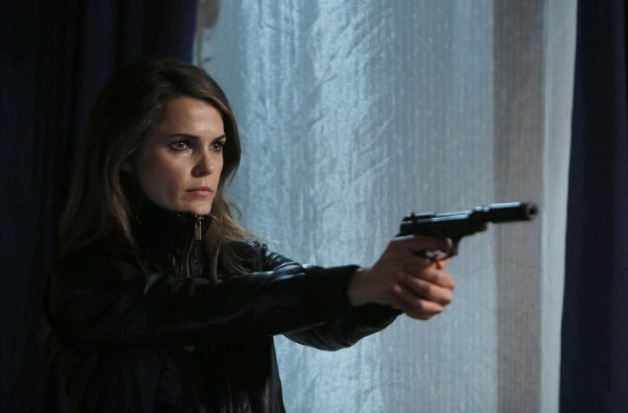 Showrunners Joe Weisberg and Joel Fields on THE AMERICANS Writer Joe Weisberg knows a lot about being a spy. He used to be one. The former CIA officer is now the showrunner of the hit drama The Americans.

Set in the 1980s during the height of the Cold War, The Americans centers on a married couple (played by Keri Russell and Matthew Rhys) who are actually Russian illegals spying inside the U.S.

“A lot of it is based on real things and a lot of it is made up too,” Weisberg said when asked if he used any personal stories from his time at the CIA. “Russian illegals living here is a real thing.”

Weisberg’s team of writers work around the clock to ensure that what they put on the page is as accurate as possible. They strive for authenticity, but also know when to use creative license to make the story dramatic.

One concern the creators had when going into the first episode was whether the audience would find the couple likable. Weisberg and his partner Joel Fields wondered if the audience could accept a show about Russians spying against America. “The hope is that what we’re showing is that it’s not about rooting for the KGB but rooting for Philip and Elizabeth,” says Fields.

With critical reception at 89% on Rotten Tomatoes, the likability factor wasn’t an issue anymore. Now, the writers had to follow up on the acclaimed first season. As for what to expect in Season 2, Weisberg and Fields agreed there will be more of what the audience loves and a few surprises, too. “The marriage is so tumultuous in Season 1… It’s going to settle down and they’re going to get along a little better in Season 2, but you know, even when you get along in a marriage, there’s still a lot of ups and downs and problems…” says Weisberg.

Season 2 of The Americans premieres on FX February 26 and the Blu-ray and DVD of Season 1 releases February 11.