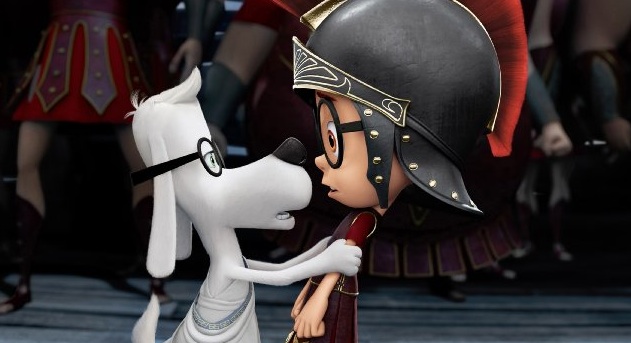 The beloved brainiac dog of the 60s, Mr. Peabody, returns for his very own feature film along with his son Sherman. The silly time travel movie with a heart-warming father and son story is not the typical subject matter for TV writer Craig Wright, who wrote Mr. Peabody & Sherman.

Wright’s other credits include dark and meandering dramas like Lost, Six Feet Under and United States of Tara, among others. “In many ways, tonally, it’s a great relief,” Wright says. “In many ways over the years I’ve grown tired of the precipice of what people expect me to write.”

In many ways, Wright is a lot like his character Mr. Peabody – someone who wants to do the opposite of what people expect. The feature film tells the story of how a very intelligent dog – the most intelligent living creature on the planet in fact – decides to adopt a rather average boy.

With a film like this, there are many things to consider. Wright not only had to live up to the expectations of the character who was first appeared on the TV shows Rocky and His Friends and The Bullwinkle Show. He also had to work with the time travel aspect of the film and the extensive notes process typical of animated movies. “The writer’s job in general in Hollywood, in my opinion,” says Wright, “is to try to safeguard two things, the psychological legibility of the characters and the causal chain of events.”

So, how does a screenwriter balance both? Wright says it’s instinct, experience and a few techniques he learned along the way. ScreenwritingU sat down with Wright for a one-on-one interview to get the skinny on his successful writing career.

No Replies to "Craig Wright on MR. PEABODY & SHERMAN"