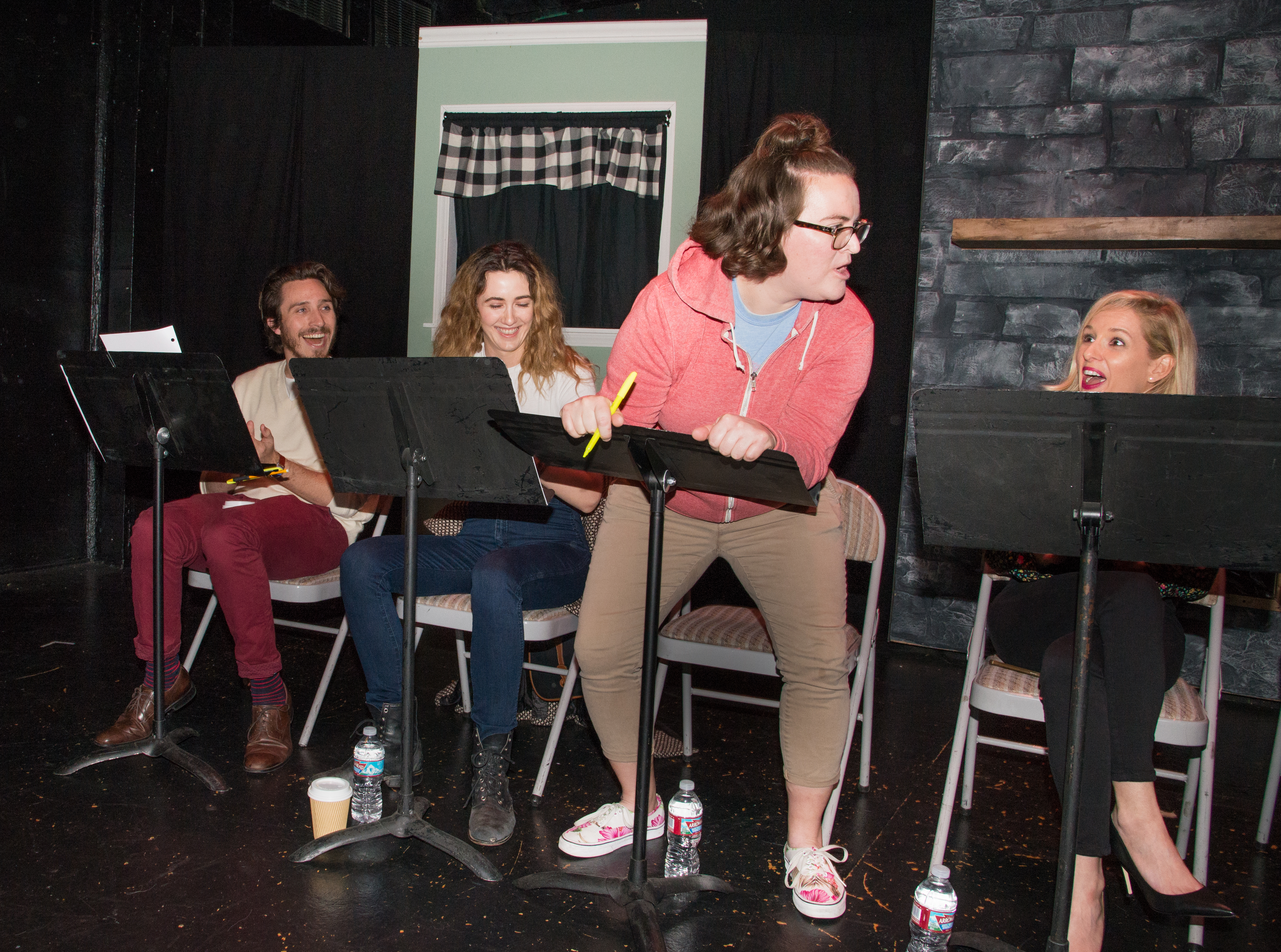 What’s the toughest part about trying to make it in Hollywood? Convincing someone to read your screenplay. But what if you didn’t have to convince anyone and they didn’t have to do any reading…? Sounds like the perfect scenario. It’s called a “staged reading,” and it’s growing in popularity as new channels of script discovery continue to open up amid the surplus of spec scripts on the market.

I recently attended a staged reading of a comedy film script Golden Arm at the Hudson Theater in Hollywood and asked the screenwriters, Ann Marie Allison and our own editor-in-chief Jenna Milly, who produced the staged reading themselves, the secret to their success.

A little about the script:

Golden Arm is set in the world of competitive women’s arm wrestling and the quirky characters who delightfully inhabit that colorful world. We follow a young woman, Melanie, who is down on her luck after losing to her bakery. She discovers she may have an unusual opportunity to win a $20,000 prize – enough to buy her bakery back – if she participates in an arm wrestling tournament. Melanie struggles to find her confidence as the reigning champion, the hulking Sarah Silverback, threatens to take her down.  Big egos go into competitive overdrive as our protagonist navigates her way through this strange world that is as vital as it is funny.

So, how did the screenwriters put on this event to showcase their work and hope that someone — a producer, executive or investor — might want to jump on board to help make the film…? Here are 10 steps that will help you get it done. The audience trickles into the Hudson Theatre in Hollywood. Photo by: Cory Hackbarth

No. 1 — Secure an inviting space at a convenient location.

The writers split the bill to rent a 99 seat theater for a one night show in Hollywood. The Hudson Theater is used to this kind of event and they guided these first time theater producers though the entire process which went off without a hitch.

No. 2 — Rehearse the actors with a director Nicole Byer delivers a line during the reading. Photo by: Cory Hackbarth

Whether one of the actors is on a hit TV show, performs in the local comedy troupe or is simply connected through your PTA, try to have at least one actor who is a “draw.” With the help of Bharoocha, the writers secured several comedic actors Nicole Byer (*Loosely Exactly Nicole, Mike and Dave Need Wedding Dates), Betsy Sodaro (Dr. Ken), Madeline Zima (Californication, I Am Watching You) and Abbey McBride (Barely Famous, Veep).

No. 4 — Have a designated person to read scene directions

Fellow screenwriter Ellen Huggins (The Rachels, Fatal Flip) read the stage directions.  This person is the anchor of the read. He or she should be an actor or at least someone who is articulate and charismatic. Also, be sure to go through all the scene directions and cut all non-essential directions. You want the reading to flow and be mostly dialogue driven. No. 5 — Make sure your screenplay is polished

Do not spend the money/time to read a screenplay that isn’t ready. Feel free to do informal table reads as you are developing the screenplay, but the staged reading should present have a finished product.

No. 6 — Social media is your friend

Take professional photos and video of the reading to promote on social media. Create your own twitter hashtag and Facebook page too. The best way to get your script out there is to put it out there.

Particularly if you’re reading a comedy script, make sure you have a full audience. The writers invited their friends, the actors friends and promoted the event on social media.

Blocking a staged reading is a great way to keep the audience engaged. If you have too many cast members however, it could get messy.

Some screenwriters may want to get feedback after the reading, if so, have someone moderate the talkback. You could also organize a Q and A to allow audience members to ask questions and give notes. Actor Ross Buran hangs with director Maureen Bharoocha at the after party. Photo by: Cory Hackbarth

No. 10 — Thank the audience after with food and drink.

The snacks don’t have to be fancy – pizza and Two Buck Chuck work fine. But reward your audience members for taking the time to come out, find a parking space, and be a part of the event.

Who knows one of them might just be someone who can get your hands into a development exec, a producer, an investor or someone who can take your script to the next level.

Have you ever staged a reading of your script? If so, we’d love to hear about your experience.

Wails from the Script, How Do You write Sex Scenes?