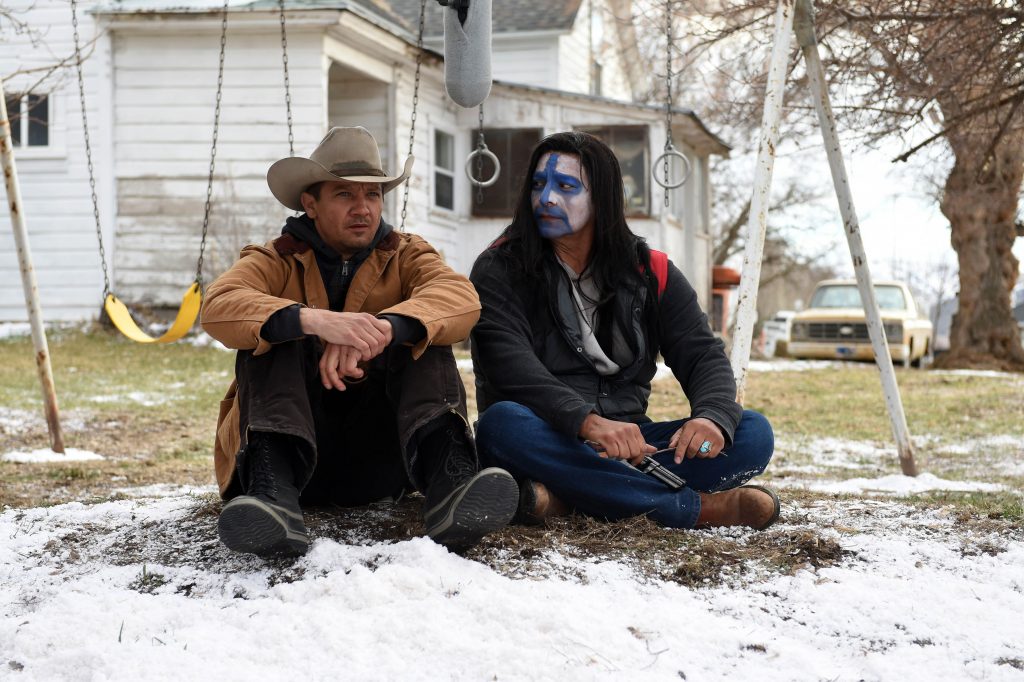 Wind River is a crime thriller set on an Indian Reservation where a rookie FBI agent (Elizabeth Olsen), joins forces with a town’s veteran game tracker (Jeremy Renner), to investigate the murder of a young woman (Kelsey Asbille). There’s a sense of lawlessness on the reservation and everyone is vulnerable to some kind of danger, particularly women. The road to justice on tribal land is bloody and hard won.

Taylor Sheridan has written two films previous to Wind River: 2015’s Sicario and 2016’s Hell or Highwater, for which he was nominated for an Academy Award. But Sheridan didn’t start out as a writer. He came to Hollywood to be an actor.

For two seasons, Sheridan played Deputy Police Chief David Hale on FX’s Sons of Anarchy.  Living in a cramped apartment with his pregnant wife and still getting paid as a day player, he asked for a raise.  What happened next would change his life in ways he could have never predicted.

“They said, ‘No, you’re not worth it.’ So I quit. But they were right, the show did fine without me.  It was a business decision.  That’s when I realized, that’s all I’m ever going to be. So I decided to start telling my own stories.” Sheridan says making the transition was incredibly challenging, especially since he didn’t have an agent. After writing Sicario, he sent the script to his attorney who then sent it out to agents. Eventually, he wrote Hell or Highwater, which sold before Sicario, and doors began to open.

“It took me two years before I got a producer behind Sicario, but the real challenge is finding a director. The first director we sent it to was Denis Villeneuve (Arrival, Blade Runner 2049). He leaped at the opportunity. Four months later we were in production.”

We asked Sheridan what he learned about writing from being an actor. “I gained the ability to know what dialogue is a trap for an actor. People in my screenplays don’t say hello they don’t say goodbye, they don’t say yes or no. There’s always a more interesting way to say those things. I never move plot with dialogue because I know how thankless and difficult a job that is, and it’s lazy. Film is a visual art. You tell the story with the camera. The dialogue tells us how the characters feel and are reacting to the story. Because, as an actor, I’d suffered so many times from writers violating that truth, I always try to find interesting ways to say how old someone is, or describe somebody. It’s a lot of work, but that’s how you get a screenplay from pretty good to good, and from good to great.” For Sheridan, even the smallest detail in a script can help create tone and support the overall storytelling.

“Every character has an arc. Each one starts in one place and ends up in another in my stories – from the smallest to the largest.  In terms of giving that sense of lawlessness, what I’ve done is draw a line in this map in this world where I decided the rule of law gives way to the laws of nature.”

Sheridan also uses his scene directions to create tone. “I’m a big believer in being descriptive to the point of being poetic. I don’t need to write ‘wide angle here’ or ‘extreme close up here,’ what’s more important is to tell me why I would do an extreme close up. What in that person’s face warrants the camera so close? Are their eyes welling with tears or are they fighting emotion? Rather than tell me how to see the world, tell me what I’m seeing and how it makes me feel. Treat it like prose.  The tone should be present on the page.”

At the end of the second act, the story moves into flashback to fill in the gaps of the mystery (we’re being tight-lipped on the details as to not to give away the ending). It’s a powerful scene but it almost didn’t happen.

“The studio wanted to get rid of the flashback sequence. People said, ‘You can’t do that in a movie.’ I watch it and think of it as the cornerstone of the piece. It is art. You can’t do it wrong. I really try to demolish the traditional structure of a three-act screenplay. How can I play with that? How can I wreck the audience’s expectation? Everyone’s seen a thousand movies. Whether they know it or not, at about an hour and ten, to an hour and thirty minutes, they know it’s the end of the second act and we’re in the homestretch.”

Sheridan says he’ll never go back to acting as a profession. “It’s ironic that I got my first direct offer after I had quit acting for five years. But I don’t have any interest in starring in anything.”

So how were the actors in his film? Renner plays Cory Lambert, the game tracker, with vulnerable machismo, looking to heal the wounds of others as a way to heal his own. Olsen is strikingly convincing as Jane Banner, the rookie FBI agent, and owns the lead role by the end of the film.  Graham Greene combines rage and sorrow as Ben, the sage on the edge of self-destruction. Up-and-coming talent James Jordan masters the villain role of Pete Mickens with youthful, unguarded menace – we’ll certainly be seeing more of Jordan in the near future.

4 Replies to "Wind River writer asks, “How can I wreck the audience’s expectation?”"