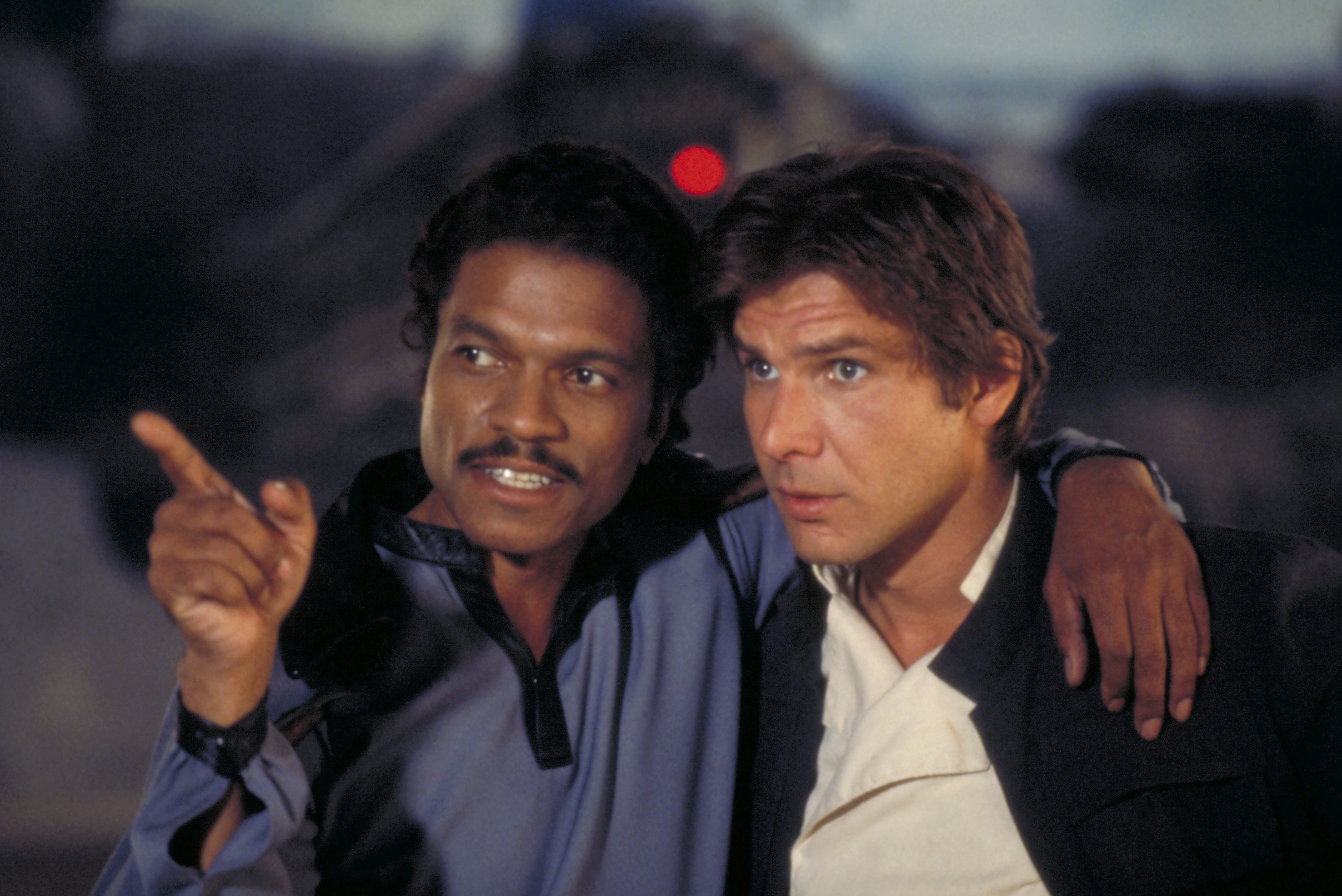 5 Things to Know When Writing a Star Wars Spin-Off As a young writer, it is important to understand how franchise writing works.  Here we are going to talk about writing a Star Wars spin-off anthology film.  But where do you start?  How do you know what kind of movies Lucasfilm will want to make in the years to come?  That’s where my investigative work comes into play.

The only Star Wars movies before 2015 were written by George Lucas.  Sometimes Lucas would include writers like Lawrence Kasdan or Jonathan Hales, but they were still HIS stories.  After the sale of Lucasfilm to Disney for $4 billion dollars according to USA Today, we got our first non-George Lucas Star Wars movie ever.

In addition to these new saga films, Lucasfilm announced an ambitious plan to release at least one new Star Wars movie per year, in perpetuity.  Therefore, it was decided anthology spin-off films would be the best way to continue the series.

So far, we have three Star Wars anthology films in play:

Rogue One, directed by Gareth Edwards, was the first spin-off movie Lucasfilm released in 2016. It told the story of Rebel Alliance soldiers who stole the plans for the Death Star. This sets up the events in George Lucas’ initial entry into the Star Wars universe, A New Hope.

Han Solo is the second spin-off film from Lucasfilm and is set to be released in May of 2018. Written by Lawrence Kasdan and his son Jon, the untitled anthology film will be directed by Ron Howard.  It tells the origin of perhaps the most charismatic character in the series.

In development for 2020 is an Obi Wan Kenobi spin-off.  This movie will likely take place during the twenty year period between Revenge of the Sith and A New Hope.

All three of these films expand on the Star Wars lore without compromising George Lucas’ original vision.  They also form their own prequel trilogy set outside of the Skywalker Saga.

Considering there is now no end in sight for these anthologies, that leaves plenty of opportunity for young scribes to fulfill their dreams of creating new stories for Star Wars.  The only prerequisite is that it fit into the continuity of the original saga films.

No. 1 – Know Your Star Wars Crawls You can actually find the logline for Rogue One right there in the opening crawl of Episode IV.  There are more clues for other possible stories in the subsequent crawls if you look hard enough.  There are three years of the Rebels evading the evil Empire between A New Hope and The Empire Strikes Back.  Before Return of the Jedi, you have the Bothans stealing the plans to the second Death Star.

Han Solo, Princess Leia and Luke Skywalker are unlikely to be the focus of these stories.  However, thanks to the CGI used to bring back Peter Cushing in Rogue One, we know it is possible to use these characters in limited fashion.

There’s an opportunity to also focus on Darth Vader during this period.  Imagine what mission Vader could go on for the Emperor that might further develop his character.  The possibilities are eminently endless.  However, your goal would be to create new characters who can have their own adventures that feature these familiar faces.

No. 2 – Pay Attention to the Dialogue in Star Wars In the same way much of George Lucas’ Star Wars prequel’s plot was actually mined from Lucas’ original dialogue, a lot of the Han Solo origin movie we are getting is rumored to take on story points from the original trilogy.  In the Han Solo origin film we are likely to find out how Han won the Millennium Falcon from Lando Calrissian, a plot point mentioned in The Empire Strikes Back.

We will also probably see the Falcon make the Kessel Run in 12 Parsecs as Han bragged to Obi Wan and Luke when they first meet in A New Hope.  We’re even likely to find out how Han and Chewbacca first met.  There’s a lot of real estate for a writer to explore in how all of these things came about.

Yoda is a perfect character from the original trilogy to be explored. Having lived for 900 years, a young Yoda movie could bridge to the events linked to the Knights of the Old Republic, which is essentially the Game of Thrones time period in the Star Wars Universe.

No. 3 – Notice the Supporting Characters from Star Wars

The Bounty Hunters we met in THE EMPIRE STRIKES BACK are perfect ancillary characters to tell a new story.  These bounty hunters include Boba Fett, IG-88, Bossk, Dengar, 4-Lomm, and Zuckuss.  How much fun would it be to see them in a heist film?  Jabba the Hutt is another Outer Rim character that could be the subject of a spin-off.  There’s even the opportunity to return to the prequels. You could follow different Jedi on solo missions before the Empire rose to power.  The possibilities are endless.

Let your imagination run wild by exploring the backstories of these amazing side characters.  ROGUE ONE taught us the Star Wars universe is bigger than the Skywalker saga alone.

No. 4 – Don’t Be Afraid to Tackle New Genres in Star Wars (within reason) One of the more interesting aspects of Rogue One was how it was trying to be a dark and gritty war film that didn’t rely on the magic of the Force.  The new Obi Wan movie is rumored to be something akin to Hugh Jackman’s Logan, a dark western of sorts.

It’s important to think outside of the box when you are trying to make an impression.  A horror film could be the perfect genre for Star Wars.  With Stephen King’s IT shattering box office records, you might see Lucasfilm go a little darker.

After all, The Empire Strikes Back is a pretty terrifying movie at times.  Han being frozen in carbonate is quite traumatic.  C3PO gets blown apart and Luke nearly gets eaten and almost freezes to death.  Imperial Officers are choked out by Vader and Chewbacca nearly chokes out Lando. Luke cutting off Darth Vader’s head and Luke getting his hand cut off are both horrifying. These are all debatably scary moments!

However it’s important to remember not every genre will work in the Star Wars universe.  Phil Lord and Chris Miller’s comedic take on Han Solo didn’t mesh with Lucasfilm.  They were fired mid-way through production, according to Variety.

As a writer, you must discern what genres are going to work in this franchise.  Never be afraid to take a chance though. The characters in Rogue One are what worked best.  These were new character who we had not met before.  Felicity Jones gave us a layered heroin, Diego Luna a conflicted and brutal assassin, Ben Mendelsohn a crooked and vile politician and Alan Tudyk, a hilariously nihilistic android.

Characters are what make Star Wars work.  Without great characters, you cannot tell a great story.  Remember George Lucas based characters like R2D2 and C3PO on the comedic foils in Akira Kurosawa’s Hidden Fortress.  He used many Joseph Conrad archetypes as well.  You should think about some of your favorite characters when deciding who you want your protagonist to be.

After you create dynamic new characters, you must find something great for them to do.  George Lucas used Flash Gordon serials for inspiration.  Don’t be afraid to emulate the films you love when creating new stories for your Star Wars characters.  Hugh Jackman’s Logan used Clint Eastwood’s Unforgiven as inspiration.  Good writers tell familiar stories in new ways.

If you ever think you won’t have the chance to write for a franchise like Star Wars, remember the story of Roger Corman disciple James Cameron.

Cameron had only made two films when he wrote Aliens, which was a sequel to Ridley Scott’s Alien.  Even though James Cameron had nothing to do with the first movie, he was able to write and direct a SPIN-OFF.  Cameron’s sequel grossed over $131 million dollars and garnered seven Academy Awards nominations, winning Oscars for Visual Effects and Sound Effects Editing.

What does this lesson prove?  Never be afraid to dream too big.