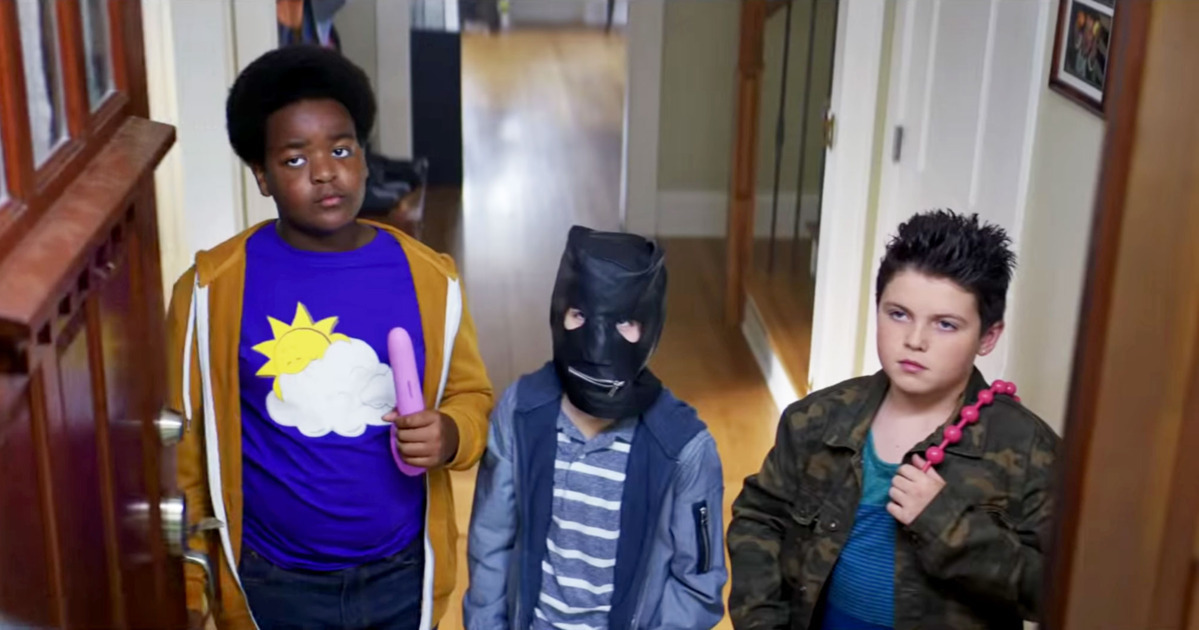 Good Boys is a hilarious comedy about three sixth grade boys who ditch school and embark on an journey to return their father’s precious drone after it’s stolen by some teenage girls. Part Stand by Me, part Ferris Bueller’s Dayoff, it’s probably the funniest movie of the summer.

Writing partners Gene Stupnitsky (who also directs) and Lee Eisenberg, who wrote 2011’s Bad Teacher and worked on TV’s The Office for five years, say they wanted to make a movie they hadn’t seen before. An R-rated tween comedy certainly qualifies as fresh. Even when people suggested making the story more commercial by aging up the characters to high schoolers, they resisted.

“One of the reasons we wanted to make the kids this age,” says Stupnitsky, “is because they’re earnest. Earnestness is a great comedy engine. They don’t have any self-awareness, they’ll cry if they get in a fight over something silly.”

Eisenberg agrees, saying, “Everything with them is at a 10. Juxtaposing that with them selling a sex doll that they don’t realize is a sex doll, or crossing the freeway — everything at that time feels like the most important thing. Like if they don’t go to the kissing party, their lives will be forever ruined. As an adult, you think, ‘I don’t want go to a party, I’m tired.’ That’s the difference.” The characters – and apparently the child actors Jacob Tremblay (Room), Keith L. Williams and Brady Noon who play them – thought the sex doll was a CPR dummy and continue to think that to this day. So how did they manage to keep the truth from the boys? Some quick thinking from actor Stephen Merchant helped.

“We were setting up the shot [with the sex doll] and I could see them whispering,” says Stupnitsky. “Maybe her dress came up and they saw that she was anatomically correct. They didn’t normally ask us questions, because we never really told them anything pertaining to sex, we’d always say, ‘Go ask your mom.’ But they asked, ‘Why does she have a… you know?’ We were just kind of frozen and Stephen Merchant, to his credit, said, ‘Doctors use this to practice in medical school.’ I thought, that is a great answer.”

“And the kids were like, well that tracks,” adds Eisenberg.

With adult comedic powerhouses such as Merchant, Will Forte and Lil Rel Howery lending their talent to the movie, it’s no surprise there was a lot of improvising on set. The writers also used as many “alts” or alternative jokes, as they could think of. They say shooting a lot of alts is the key to a great comedy.

“Harold Ramis said, ‘The script is the worst we can do,’ says Stupnitsky, “which I think is a good way of looking at it. You do the best you can and you have that as a baseline but you always see if you can improve on it.”

Occasionally, they admit they went too far with the raunchy comedy and decided to remove certain scenes after some test screenings.

“It’s that old saying,” says Stupnitsky, “how do you make someone laugh? You have them fall. How do you make a comedy writer laugh? You push an old lady down the stairs. What makes us laugh is probably too far for a normal audience.”

Stupnitsky says one of the biggest challenge writing for the tween characters was authenticity. “You don’t want people saying, ‘They would never talk like this.’ But also, trying to get comedy from their sweetness. We’ve all seen movies where there’s a precocious child clearly written by an adult. We weren’t looking to do that.” The writers have this advice for writing an R-rated comedy:

“It needs to come from character, it needs to come from story,” says Eisenberg. “If the goal is you’re going to do something audacious, then it’s going to feel audacious for audacious’ sake and I think that’s the wrong approach. Also, why is it R-rated? Is it because that’s the best version of it or you think R-rated comedies sell easier than PG-13 comedies? Because, actually, that is completely wrong. Its about the idea, what you’re trying to say and how are the characters navigating the world.”

“Character will lead you everywhere you need to go,” says Stupinsky. “Once you know who that main character is, you know what they’re going to do. The fact that it’s rated R doesn’t really matter, maybe it doesn’t need to be. What matters is who are they and what are they doing.”

In terms of writing multiple protagonists like they did in Good Boys, Eisenberg says it’s all about distinguishing characters and giving backstories to everyone, no matter how small. “Every character needs to live on their own. We want everyone to exist as if they were the star of their own movie.”

Writer/director of 'The Kitchen' says go for that ‘bold, crazy idea’