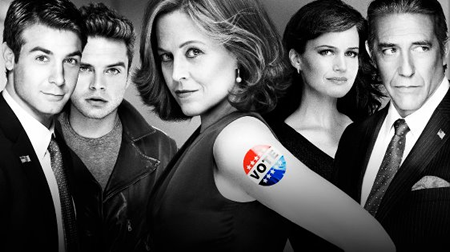 Having worked with Berlanti on every episode of “Brothers & Sisters,” Molly knows his process well.  In this interview, she talked about the show, the writing process, and how a writer responds to the inevitable media criticism that comes with success.

“I’ve always been fascinated with Bill and Hillary Clinton.  Why did she stay?  What is the deal between them?  But what we were searching for was ‘What are the things that we don’t see, that we don’t know.  Let’s work that out!”

Molly went on to describe what it is like to work with characters that are both edgy and intriguing.  “This show, for USA, is very risky.  The currency of power often crosses over into the sexual world.  We were really up for pushing the boundaries.”

But the show is also about how a family survives the world of politics.  “She (Segorney Weaver’s character) is the mother of this big dysfunctional family. Her two sons are turning 30 and they’re both damaged because of the time they spent in the White House,” says Molly.  “Both of them have serious issues with their parents, particularly with their father who was publicly unfaithful to their mother.”

On the process of creating a new show, Molly said “Rather than try to come up with a storyline right off the bat, Greg said ‘What’s a scene you’d like to write?  What’s something you’ve never seen on TV?’  It’s a great way to start.  One that came up was a fist fight in the Oval Office!”

From there, they went to more conventional ways of designing episodes with character, subtext, and ongoing conflicts that will keep us engaged throughout the series.

“The challenge is to take notes from actors, directors, studio, and network execs, and make sure the changes don’t make the script worse,” Molly said.  “You have to find creative ways to make sure your vision comes through and satisfies a lot of people.”

For more on the writing process, how writer’s rooms work, and the show POLITICAL ANIMALS, listen to the interview

Interview: Screenwriter Jody Lambert on Indie Drama, PEOPLE LIKE US