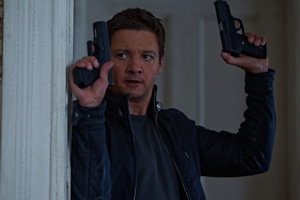 “There’s a lot of movie talk,” screenwriter Dan Gilroy says of his film family. Gilroy’s not only the writer on The Bourne Legacy that he co-wrote with his brother, Tony Gilroy – who also wrote the first three films in the series and directed this one — but he’s the husband of actress Rene Russo and son of Pulitzer-Prize winning playwright Frank D. Gilroy.

That’s got to be some Thanksgiving at the Gilroy house! And Gilroy confesses, they don’t really talk about anything else. But they all seem to love it that way.

This is the first time in several years that Dan and Tony Gilory have had the chance to write together on a script, although the two started out as screenwriting partners. A lot has changed since then, each moving on with a solo career. Dan’s credits include Real Steel, the TV series City of Light, The Fall and Two for the Money, among other titles. Tony’s credits include the Bourneseries, Michael Clayton, Armageddon, The Devil’s Advocate and Dolores Claiborne, to name a few.

ScreenwritingU sat down with Dan to discuss his prolific family, his long list of credits but to also see if we could eek out a couple of secrets from his new movie that comes out August 10.

The story – much of which has been kept under tight wraps – is about a Treadstone agent – played by Jeremy Renner — who is now on the run, or is he…? We tried to get the answer during our one-on-one interview, but Dan’s about as locked down as Jason Bourne!

So, the question remained, was it a challenge to write about a different character now that everyone has become so attached to Matt Damon’s Jason Bourne? Gilroy’s answer was an emphatic, “No.”

“I wanted to keep the quality. I wanted to push the quality. It was never anything to do with the characters, per say,” Gilroy says of his process of writing with his brother who was in New York at the time of their co-writing. Dan remained in Los Angeles. The two brothers outlined for 12 weeks, for seven days a week at almost nine hours a day. They’re going deep with this Legacy.

Gilroy believes in outlining above and beyond everything else. “If I had four months to write a screenplay, I would spend two months coming up with idea, five weeks plotting it and three weeks writing it.” For more insight into this family of writers and perhaps a few secrets from The Bourne Legacy, listen to ScreenwritingU’s one-on-one interview with screenwriter Dan Gilroy.

No Replies to "Interview: Screenwriter Dan Gilroy on THE BOURNE LEGACY"