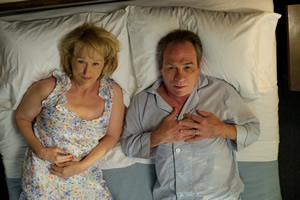 ScreenwritingU sat down with screenwriter Vanessa Taylor to get her take on the clichés of romantic comedies, working with Meryl Streep and being on the famed Hollywood Black List.

Hope Springs is the story of a married couple looking to put the spark back in their love life. These two are sleeping in separate bedrooms, barely talking and sex is pretty much out of the question.

When Kay, played by Meryl Streep, decides she’d like to see a marriage councilor for a week of intense sessions, her husband, played by Tommy Lee Jones, decides he’ll go but that the whole thing is a big giant scam. You can only imagine what happens next.

“I was very drawn to telling a love story in the context of a marriage,” says screenwriter Vanessa Taylor, who is also a writer on the TV show Game of Thrones. “So many romantic movies are about meeting someone rather than sustaining a relationship.”

Hope Springs takes a turn when the couple ends up across the couch from a therapist played by Steve Carell. Taylor loved the idea of all the comedy and intense moments she was going to get out of this situation, but writing it wasn’t as easy as it seems.

When she showed her first draft to a mentor, he told her to throw out the last 60 pages. Wow! That’s quite a note. Taylor says that was tough to hear, but she knew her friend was right. She decided to take the advice and re-write the ending.

After she was done with the script, it “went around town,” as industry folks in Hollywood like to say, but no one picked it up. Then, the most amazing thing that could happen to any new script that hasn’t sold happened – it got on the Black List. The Black List is a list of the best screenplays circulating Hollywood that have not yet been picked up.

From the Black List, Taylor was able to get her script to Meryl Streep. Sounds like a casting dream? It was for Taylor. All she had to do after that was show Meryl the pages she’d written about this very sensitive topic. Awkward, anyone?

There’s one moment in the film where Streep has a very sexy moment by herself. We don’t want to spoil it for you (can’t you guess now?). For Taylor, the entire process made her feel uncomfortable. “I thought, Oh God, I made these people say these things that are embarrassing. I felt so self-conscious about it. It’s really different than being alone in a room and then having real people say these things. You’re like, ‘Oh my god!’”