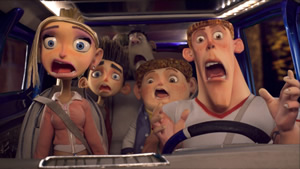 Screenwriter Chris Butler got his start in Hollywood by drawing storyboards. Wait a second that means no dialog, right? How does a storyboard artist get good at writing if he never has to spew out dialog?

He concentrates on character and not all the chatter, says Butler about the process. Although, the writer/director for the new zombie kids movie, ParaNorman, admits he loves writing dialog too, he says it was all those moments putting pencil to paper as an animator that helped him learn how to construct a good story.

“I’ve worked in storyboarding on animated movies for all my career, actually,” Butler tells ScreenwritingU in a one-on-one interview. Butler’s animation credits include Coraline, Corpse Bride and Tarzan II, to name a few.
ParaNorman is a story of a little boy named Norman who can see and talk to ghosts. Everyone in his spooky New England town seems to think that’s hogwash until a band of zombies appears and no one knows how to get rid of them. Then, Norman becomes the one boy that has a chance of saving his town. The film has a star-studded cast. It’s voiced by Anna Kendrick, Casey Affleck and Leslie Mann.

ParaNorman was also filmed almost entirely with a 3D stop-motion animated technique that took more than a year to film. Butler was not only the screenwriter but he also co-directed the film. Although he had more than enough technical challenges on his plate, he stuck by his number one rule. “If you can’t sum up your story in one single line, then you don’t know what your story is about,” he says.

Listen to our podcast with writer/director Chris Butler to find out how you can go from storyboards to feature films with the magic of animation along the way. ParaNorman creeps into theaters August 17.