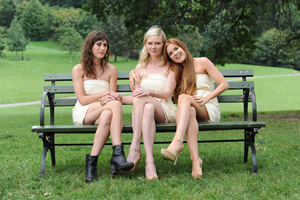 If you hate the F-word, you don’t want to see Bachelorette. And you know what? The film’s writer and director doesn’t care. She wants to show you how women really talk when no one else is around.

That’s the kind of artistic bravado that brought playwright Leslye Headland out of the theater and into Hollywood to write and direct her feature film debut. Bachelorette is about three best friends who decide on the eve of their friend’s wedding to get coked up and destroy her wedding dress. Once they sober up enough to realize what a horrible thing they did, they head off into the night to right the wrong and get the dress back to the bride on time.

“This is about all of my frustrations growing up,” says Headland of her take on the less-than-sweet women portrayed in her film. “Hot girls can be racist, too,” she says, noting that just because you’re thin and pretty, it doesn’t mean your nice.

Headland first explored this concept in a play of the same name. When she garnered attention from Will Ferrell and Adam McKay, they asked her if she ever thought of writing a movie version of the story. Luck would have it that Headland had already started on her feature length screenplay.

When the script first went out to studios in 2008, Headland received notes that her characters weren’t very likable. She struggled to balance keeping them despicable by giving them a redeemable goal that would allow the audience to root for these characters in this situation. “Hopefully you’ll stick with the story, hopefully you’ll root for it. If you don’t, that’s OK,” said Headland.

Bachelorette is out in select theaters and also available on demand. The film stars Kirsten Dunst, Isla Fisher, Lizzy Caplan and James Marsden.

ScreenwritingU sat down with Headland to discuss female characters, the F-word and everything you never wanted to know about what women really talk about.