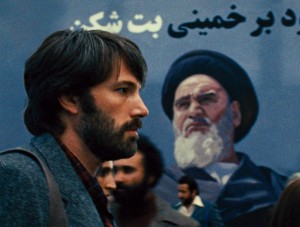 Screenwriter Chris Terrio got lucky, he says. That’s the only way he can explain how a first time writer like himself got the opportunity of a lifetime – to write a move directed by Ben Affleck. The new political thriller,Argo, received a standing ovation at Toronto Film Festival and is fast becoming the most talked about drama of the year.

“At the time, it came out of nowhere,” Terrio says of story that connected him with this amazing journey. He received a phone call from a producer at Smoke House, a production company operated by George Clooney, who ultimately produced the film. Argo is based on a 2007 Wired magazine article about a CIA mission to transport embassy workers out of Iran during the hostage crisis of the late 70s and early 80s. “I read it,” says Terrio, “and the first thing that came to mind was all the reasons not to do it.”

Riddled with self-doubt, the budding screenwriter had a supportive team around him who wouldn’t let him give up. He started working on the script, and then one day when he was down 14th Street in New York City, he received a call on his cell phone from Ben Affleck. He thought it was a joke at first, but when Affleck started talking about his passion for directing the movie, Terrio knew it was the moment of a lifetime.

Working with Affleck on the phone and out of his house in Los Angeles, the two came up with a film set in Washington D.C., Hollywood, California, and Tehran, Iran. That’s quite the geo-political thriller.

Affleck directs the film but also stars as Tony Mendez, the CIA agent who made this dangerous journey to rescue six Americans who were stuck in Iran during the hostage crisis. The film co-stars Bryan Cranston, John Goodman, Alan Arkin and Tate Donovan.

ScreenwritingU sat down with Terrio to get the skinny on writing this complex thriller, having a big time movie produced in Hollywood and hanging out in Ben Affleck’s living room (and trying to act like it wasn’t the weirdest thing that ever happened to him).

The Avengers - An Interview with Screenwriter Zak Penn