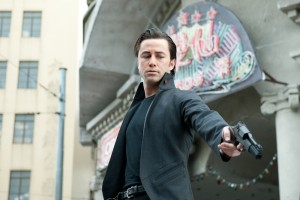 “I wrote a three page script, the very basic premise of the script,” writer/director Rian Johnson says of the first time he came up with the idea to write the new action, sci-fi movie Looper. This film started as a short that was never produced and now stars Joseph Gordon-Levitt and Bruce Willis. Dreams can happen in Hollywood!

After Johnson got his feet wet writing and directing a few other features such as The Brothers Bloom, he decided to go back to this short script about time travel to see if he could make something of it. It had been 10 years, Johnson says, but it was worth the wait.

“It took me a year an half to write the feature,” Johnson says of the film which turned into a much longer version of a travel movie about a mobster hit man who is asked to murder his future self. Sound confusing? That’s only the half of it.

“I didn’t want the movie to be about time travel,” Johnson says. He used the model of The Terminator to structure his script. Johnson explains that the 1984 Arnold Schwarzenegger classic uses time travel to set the scene but then once the technique is established, the story takes off and time travel isn’t the center of the film.

This is a big idea for a Hollywood newcomer. So, what was it like to make this action film with A-list stars? Johnson couldn’t be more pleased. He shared details of the writing process and some behind-the-scenes notes about the work Joseph Gordon-Levitt did to become Bruce Willis in an interview a podcast interview ScreenwritingU.

The film comes out in theaters September 28 and co-stars Emily Blunt, Paul Dano and Jeff Daniels.

No Replies to "Interview with “Looper” Writer/Director Rian Johnson"