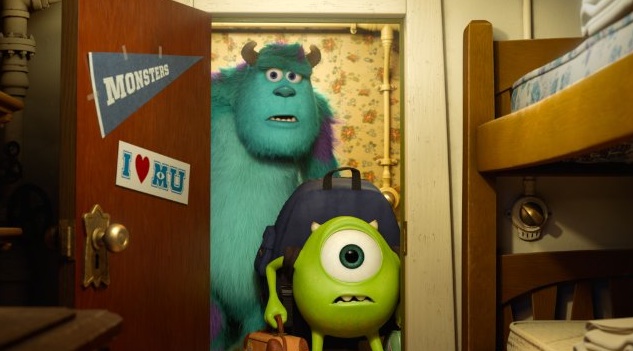 In the screenwriting world, writing a movie with Pixar is like taking a trip to the moon. Deep in the recesses of the “brain trust” – as Monsters University writers Robert Baird and Dan Gerson call the folks who sit in on story development at the exclusive animation studio – is where all the magic happens.

At the time Baird and Gerson wrote Monsters, Inc. in 2001, Pixar was just getting started. As of then, the studio’s biggest hits consisted of the first two Toy Story films and A Bug’s Life. Since then, they’ve banked more than billion dollars with films like Finding Nemo, Cars, The Incredibles, Ratatouille and so many more.

ScreenwritingU sat down with Baird and Gerson to find out just what it’s like to sit in the Pixar room. “We would develop ideas, basic outlines and treatments, but there’s always this process where you sit in a room with the ‘brain trust’ and you pitch those ideas and get that feedback. So, if you’re going down the wrong road, people will let you know,” said Baird.

Feedback can be harsh, but of course, the “brain trust” tries to give it as constructively as possible. “For about two hours, you hear lots and lots of notes,” said Baird. “But everyone has been though this process, and sometimes it hurts, but it hurts good… It’s exhausting and exhilarating.”

Monsters University is a pre-quel story to the hit movie Monsters Inc., a film about what really happens under the bed at night — monsters scare children so they can power energy with their screams. When two rival monsters meet at college, they are put to the test to see who is the scariest.

Monsters University releases in theaters June 21. The film brings back together the comedy team of Billy Crystal and John Goodman and also co-stars Steve Buscemi, Helen Mirren and Alfred Molina.