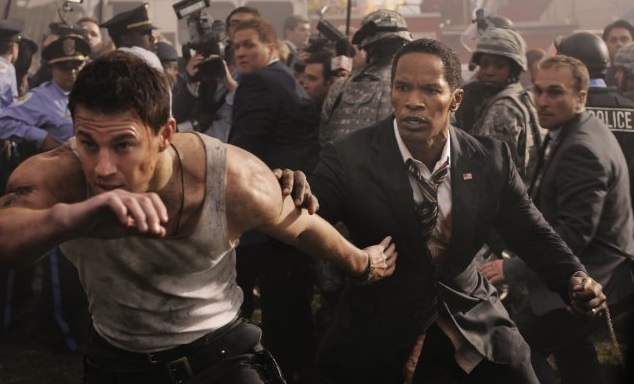 The marketing for the new action thriller, White House Down, staring Channing Tatum seems to focus more on his dirty white tank top than the plot itself. What does screenwriter James Vanderbilt think of all the hunky hubbub around his new movie? He loves it!

This conversation about costuming with the writer who penned The Amazing Spider-Man and Zodiac, might answer the age-old question about how much description is necessary to give your script what it needs to stand out.

Tatum’s tanktop is a necessary part of the story, Vanderbilt said. “As soon as we got the plot developed and we started thinking of costuming, we started thinking of how we wanted to strip him down. Obviously, because, A, he looks amazing and B, because… it’s one of those things… like at the end of Lethal Weapon, Mel Gibson is barely in a shirt. You’ve gone through so much and it makes them [the character] feel more vulnerable and manly and sexy and all that great stuff.”

So, costumes do matter in descriptions. Finally, a reason to put Tatum in his undershirt! The women in the theater seemed to like it no matter what the story reason. They clapped when Tatum’s character finally de-shirts mid-way through the film. It means a lot, to so many.

That said, this isn’t the first time we’ve seen someone with bulging muscles storm the White House in scantily clad gear this year. In March, Olympus Has Fallen, the story of a Secret Service Agent who must rescue the president during a hostile takeover, bares a similar plot to White House Down. In Vanderbilt’s version, Tatum’s character is on a Secret Service job interview he unfortunately botches just before things get hairy for the president, played by Jaime Foxx.

What does Vanderbilt think about two concepts coming to the theater at the same time? Pure circumstance, he said.

Vanderbilt wrote his script on spec and when he read about the other script selling on the Hollywood market, he was stunned. Doesn’t seem to matter if there’s a “ghost script” – as those in the know call it — similar to your project, especially not here. Both movies got made, and ultimately, they are very different.

Audiences will have the chance to decide which they prefer on June 28 when White House Down releases into theaters. ScreenwritingU sat down with Vanderbilt to hear his thoughts on writing this action thriller, competing with another similar project and how to write wardrobe into your script.

No Replies to "Screenwriter James Vanderbilt on WHITE HOUSE DOWN"