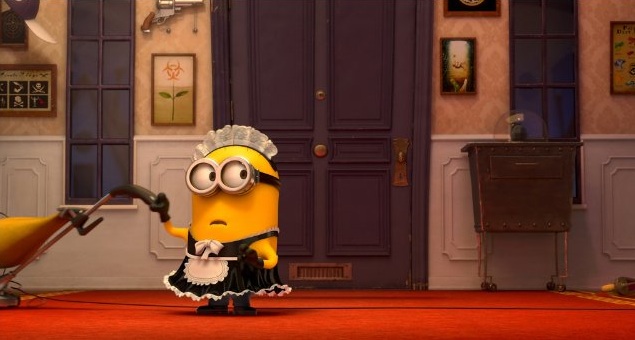 The minions are back! And they’re ready for their sequel in the newest animation feature, Despicable Me 2.

Screenwriters Ken Daurio and Cinco Paul (Hop, The Lorax) were called back to write the second iteration of the enormously successful film Despicable Me, the story of an uber villain who ends up adopting three little girls.

So, the question remains, how do you plan a sequel when, in the original, the bad guy goes from evil to good and the story seems to have been tied up so nicely? The answer: You’ve got to go back to the drawing board. This happens a lot in animation.

Apparently, the writers weren’t expecting the response they received from the first film. “It was really intimidating,” said Paul of having to go back to a sequel. “You have to be true to the source material.”

“When we wrote the first movie,” Daurio said, “We certainly weren’t thinking about a sequel. But when we started really throwing around the idea of what was next… there’s this family now that is made up of an ex-super villain and three little girls and it’s not going to be easy for them to get along. We said, ‘What’s the next step?’”

This is where the plot for Despicable Me 2 came from, purely character. The film picks up with super villain, Gru, getting hired by a secret organization that hopes to bring down bad guys. Now, that Gru (played by Steve Carell) works for the good guys, can he keep up with the morals of being a hero versus a villain? Conveniently, his new partner, a cute lady named Lucy, played by Kristen Wiig, just so happens to be a single lady looking for love. We smell a romance plot!

“We have all these cool gadgets and weapons and fun stuff for boys,” said Paul, “but then even in the first movie we have so much sweetness with these little girls, it really is a world that a lot of people can relate to.”

ScreenwritingU sat down with Daurio and Paul to discuss writing a sequel to a beloved film, appealing to both boys and girls with their story choices and coming up with a plot that still keeps you interested after your bad guy turns good.