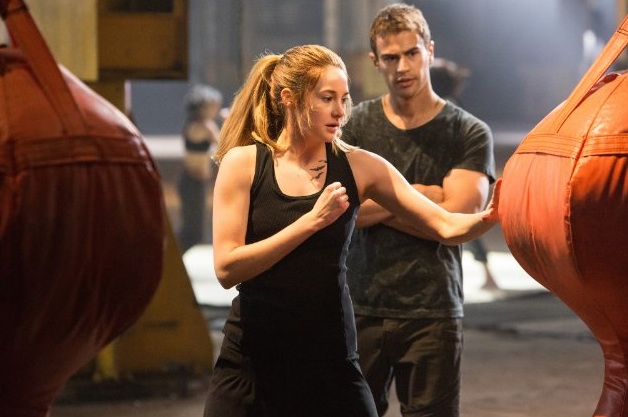 How do you take a novel beloved by young adults all over the world and make it into a feature length film while keeping the fans happy? Very faithfully says screenwriter Evan Daugherty about his new movie Divergent.  Daugherty says he spent more than a year adapting the young adult book by Veronica Roth into the feature length screenplay.

Divergent is about a young woman, Tris, living in a dystopian Chicago. The government has separated its citizens into five different factions. When Tris is of age, she discovers that she is “divergent.” This means that she doesn’t easily fit into one single faction. This of course is more than a little discerning to the powers that be.

“In order to ground it, I tried to put it in real world terms.” Daugherty says. Because of the science fiction world and its rules, Daugherty says he imagined he was writing a movie about an Amish girl who becomes a Marine. He used training movies like Top Gun, Full Metal Jacket and An Officer and a Gentleman as inspiration.

Daugherty is making a name for himself in Hollywood as a go-to for YA movies, as his last film Snow White and the Huntsman found an audience with young adults. Daugherty talked about his own YA inspiration, Star Wars. We discussed his favorite film of the series and also what made the first trilogy so grounded. Hint: Han Solo!

Next up, Daugherty has Teenage Mutant Ninja Turtles and G.I. Joe 3 on his list. ScreenwritingU sat down with the screenwriter to find out the details on how he took this book to script.

Geoff Moore and David Posamentier on BETTER LIVING THROUGH CHEMISTRY

No Replies to "Screenwriter Evan Daugherty on DIVERGENT"