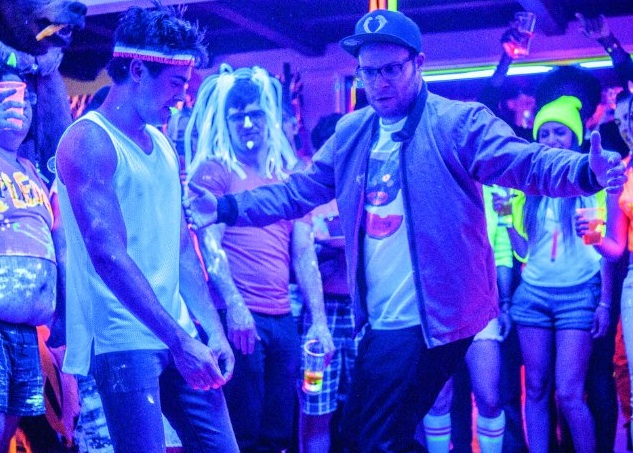 The new Seth Rogen and Zac Efron comedy Neighbors is a simple concept that took a lot of work to get right. Writing partners Andrew J. Cohen and Brendan O’Brien said they pitched several projects to Rogen before he finally decided this was the one he liked. After that, they developed a pitch.

Why not go directly to script pages? Because the strategy here was to take the pitch to all the studios in town with Rogen attached to star in the film and sell the concept out right. It sounds easy, but it’s not.

Apparently Rogen and his writing and producing Evan Goldberg (together they wrote This is the End, Pineapple Express and Superbad, among other scripts) don’t think writing a good script is any laughing matter. It’s a lot of hard work. “We had to know so much about the story that we could answer any questions the executives had,” said Cohen of the experience.

“We’re very careful about the story. We’re obsessive.” Cohen said. O’Brien added that Rogen and Goldberg pushed the first time writers to come up with something solid, from emotional arcs to subplots to set pieces. It was very drawn out.

Neighbors, O’Brien said is emotionally driven. It’s about “a couple that just had a baby and they’re kind of in that zone are they old are they young…?”

The film is about a young married couple, played by Rogen and Bridesmaids star Rose Byrne, who have a new little baby. The live in the perfect house on the perfect street. That is, until a fraternity, helmed by Zac Efron, moves in next door. The premise is good and has the potential for lots of laughs, but Cohen and O’Brien grounded the story in an emotional reality when they wrote Rogen’s character as someone who wants to be inside that party. Now their protagonist must protect his family from the frat house he secretly wants to enter.

Neighbors releases in theaters May 9.