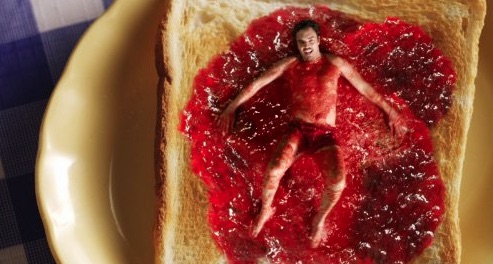 We’ve all heard before how bad sugar is for the body, for kids and why we should cut it out, but you’ve never heard it quite like this. Australian TV personality Damon Gameau created a documentary about sugar that will have you throwing out every cup of low fat yogurt, healthy cereal and juice in your house. That’s right, That Sugar Film doesn’t just focus on junk food and candy, but rather the foods we consider “healthy.”

After Gameau put himself on a diet of eating nothing but “healthy” processed foods for 60 days and also hitting the average sugar intake by Australians (40 teaspoons a day), he found that in just a few weeks his health, his energy level and his mood were all affected.

The findings are astonishing and Gameau’s delivery makes it even better. He uses creative visuals, music and celebrities to get the message across.

“Everyone’s downloading the film, watching it with their kids, schools are taking it on board,” says Gameau of the film’s success. And that’s exactly what he had hoped would happen. He spent several months working on the script to create a documentary not for the documentary crowd. He wanted something that would appeal to teenagers, kids and people who might not normally seek out a film about diet and health like this.

ScreenwritingU sat down with the writer/director to talk about his process.

That Sugar Film releases into theaters July 31 and features cameos from Hugh Jackman and Stephen Fry.

No Replies to "THAT SUGAR FILM, a sit down with writer/director Damon Gameau"