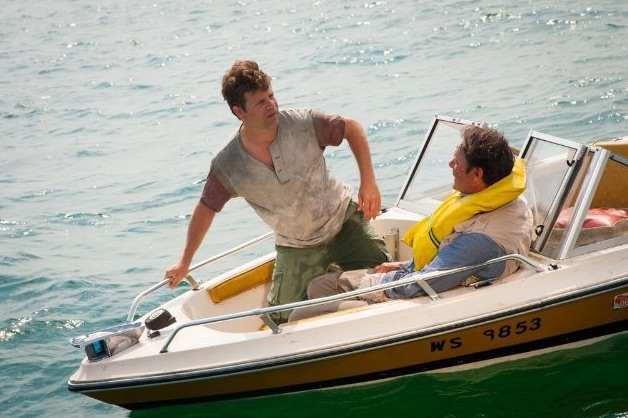 THE SURFACE, a drama from director Gil Cates Jr. and screenwriter Jeff Gendelman It took screenwriter Jeff Gendelman nearly two decades to see his quiet, psychological thriller The Surface become a reality. The story takes place on Lake Michigan where a young man comes across a stranger who is delivering a mysterious package. The film co-stars Sean Astin, Mimi Rogers and Chris Mulkey.

“I grew up on the lake as a child and I always thought, even as a five year old, what is out there in the middle of the lake where no one can see?” says Gendelman. The story is based on true events.

Gendelman and director Gil Cates Jr. shot the film on Lake Michigan in the summer. “It was really challenging,” says Cates. “Hopefully, like with any movie, you have the intention of what somebody was trying to do, what was trying to say and how it could help people… and anyone who is watching it will hopefully get their own little nugget of inspiration or thought or contemplation or peace.”

Both writer and director said the experience was very rewarding, but that they don’t need to shoot another film done entirely on the water, ever again. ScreenwritingU sat down with the duo to talk about the script, the filming and how to avoid getting sea sick.

The Surface releases in theaters September 1.

No Replies to "THE SURFACE, a drama from director Gil Cates Jr. and screenwriter Jeff Gendelman"