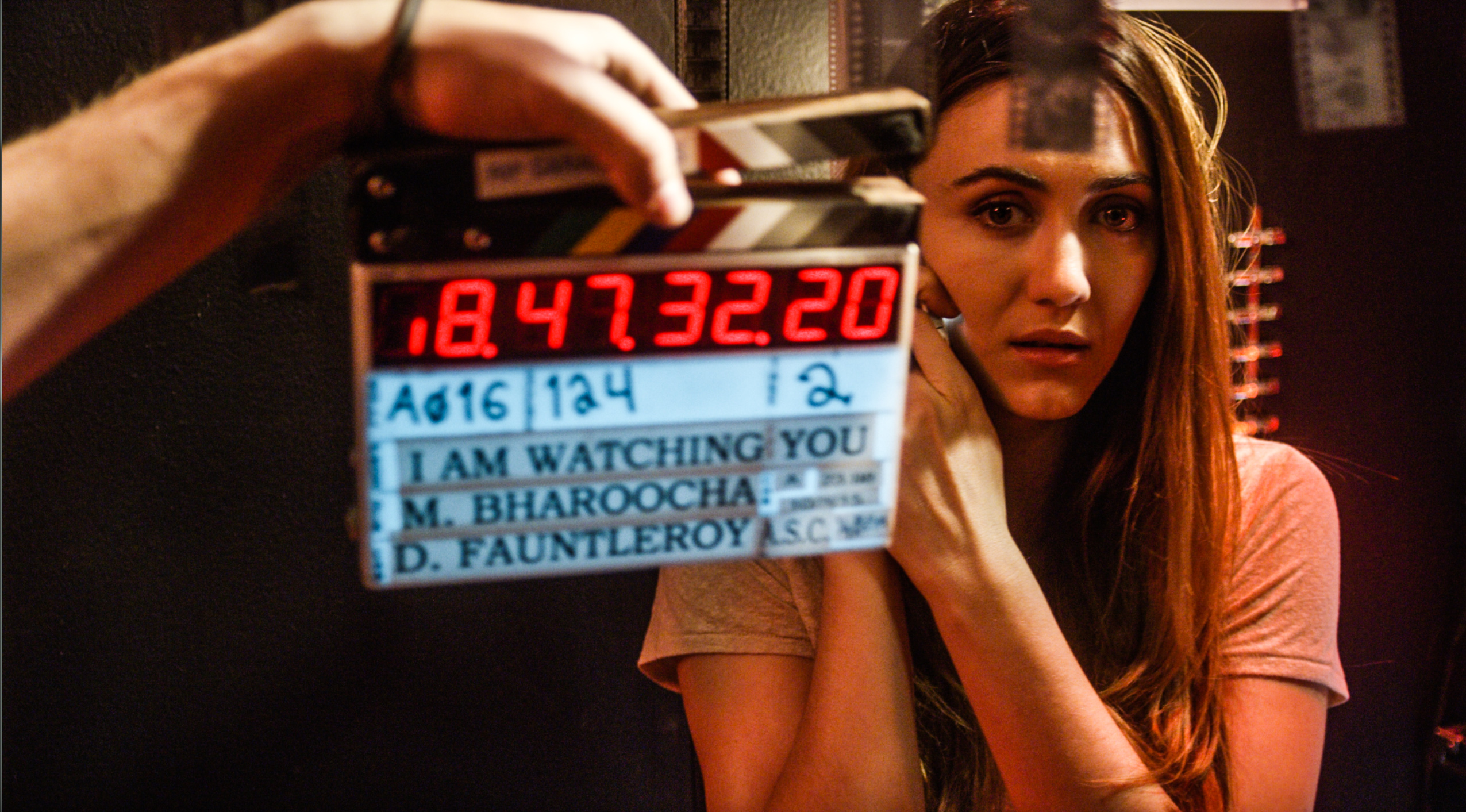 Maureen Bharoocha flips the traditional ‘male gaze’ in her fresh, sexy new movie, ‘I Am Watching You’ In her second feature film for the Lifetime Movie Network, writer/director Maureen Bharoocha brings a truthful female perspective to the film I Am Watching You, co-written by Ellen Huggins. The thriller is about a young novelist, Nora (Madeline Zima), who begins harmlessly spying on her sexy neighbor, Lucas (Brian Ames). At first, Nora enjoys glimpsing at Lucas through the window and using her own fantasies about him to fuel her latest romance novel. But soon, fiction becomes reality when Nora becomes involved with Lucas, resulting in tragic consequences.

After studying film at Boston University, Bharoocha came out to Los Angeles during the 2007-2008 writers’ strike. Having to cook up her own work to pay the bills, Bharoocha got one sweet break when she found herself on the “Cupcake payroll” after she was hired to make a series of short films for the upscale confectionery, Sprinkles Cupcakes. “They basically let me make 10 short films, each one based on a flavor of cupcake, which was really great. I still work for them, whenever they need a video.”

But given Bharoocha’s recent success in TV movies for the ever-evolving network, Lifetime, we think she’ll be soon be able to have her cupcake and eat it, too.

I’m Watching You is Bharoocha’s second movie in as many years, and she seems to have a real sweet spot for women’s entertainment. Bharoocha said her first feature-length film, Fatal Flip, (also co-written by Huggins), was an easy sell because it was very commercial.

“It was about a hot handyman who comes in to renovate this couple’s house and becomes an interloper. I Am Watching You was harder because it’s kind of this moody, Hitchcockian thriller and it took more effort to describe. We had to really convince them that this would be a fun idea.”

Fun and sexy, to be clear. As much as Bharoocha loves and is inspired by Alfred Hitchcock, she wanted to make sure she’s telling stories modern women will relate to. So, she reversed the roles.

“You see so many things where the woman becomes obsessed, or goes kind of crazy so it made the role reversal kind of interesting and I think, in a very believable way. This is something that could happen if you did start sleeping with your neighbor, it could get sticky. Nora wasn’t the crazy girl; she wasn’t looking to have another boyfriend. She was taking time for herself, figuring out what she needed and that’s something you don’t see a lot. I wanted her to come from a real place, not some sort of stereotype. She’s also really in touch with her sexuality.”

This is the value of more women writing and directing their own stories – the female point of view is addressed in an honest and significant way. It’s refreshing and entertaining. But it wasn’t enough for Bharoocha to write the role reversal onto the page. The camera had to capture it as well. “I kept saying, ‘Let’s shoot the guy like we would classically shoot the woman.’ Even in some of the sex scenes, I don’t want to be watching her, or how she’s feeling, I want to see things through her eyes. So when he’s making out with her, I want to look into his eyes.”

Bharoocha says it was particularly important to keep the female perspective in mind when she shot the sex scenes. “There was a lot more touching each other, tight close-ups and just movement. To me, that feels more like a real fantasy than a picturesque scene of two people kissing or a cheesy romance book cover. At least, that’s what me and my friends gravitate toward.” Though Bharoocha has played with shooting from the female point of view before, it was especially important in this film because she didn’t want to objectify her female protagonist or put her into the position of the classic male gaze. “Instead of him gazing at her, she’s gazing at him.”
This shift in perspective took a little getting used to, not only for her, but also for her DP and lighting crew.

“There’s this certain classic way you shoot women – you make them pretty, and soft. But I’m not afraid of shadows. Sometimes, we would light Lucas more like a beauty shot, where there’s a little more light in his eyes and they’re sparkling.”

If you’re curious to see a film shot with the female gaze, you can catch the soft light in Brian Ames’ eyes on Sunday, May 15, when I Am Watching You premieres on Lifetime.

No Replies to "Maureen Bharoocha flips the traditional 'male gaze' in her fresh, sexy new movie, 'I Am Watching You'"