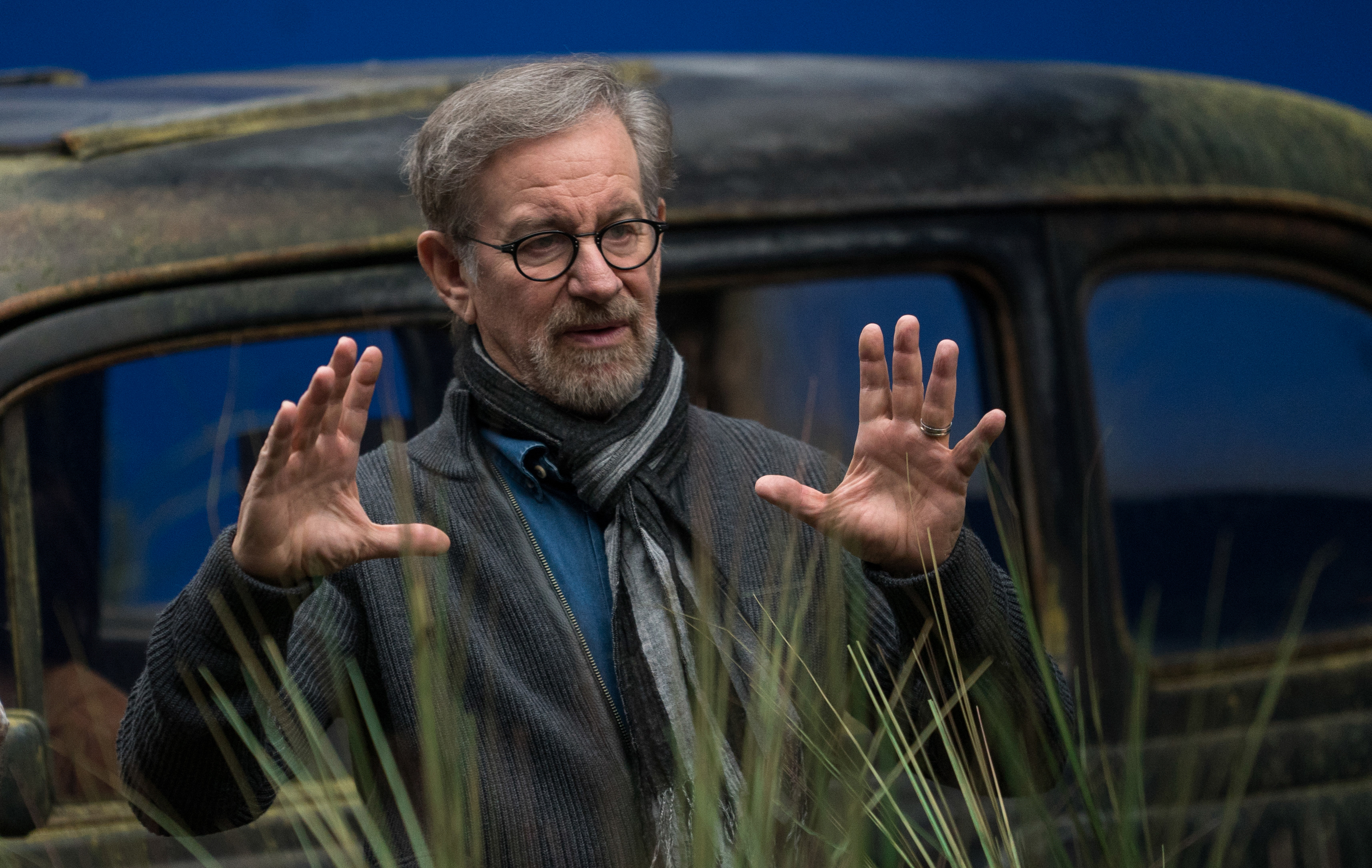 Director Steven Spielberg on the set of Disney’s THE BFG, based on the best-sellling book by Roald Dahl. Photo courtesy: Disney Pictures

Steven Spielberg’s first film project for Disney, The BFG, opens Friday and is based on the book with the same name by Roald Dahl. It’s about a little girl named Sophie (Ruby Barnhill) who befriends a giant (Mark Rylance) and discovers the wonders and perils of dream hunting.

Given that Spielberg is undoubtedly a master storyteller when it comes to action adventure films, we took a closer look at his techniques to see how they apply to screenwriting. Here are seven ways Spielberg gets all Spielbergian on storytelling. In a typical Hollywood narrative arc, characters must be tested and the happy ending must be earned. The more hardship a character endures, the more we root for him or her to prevail – especially when that character is a child.

Spielberg’s secret to telling powerful stories about children lies in his ability to weave just the right amount of darkness into a story. In The BFG, 10-year-old Sophie goes to live in Giant Country, where most of the giants eat children – a terribly frightening prospect that adds a big dose of danger to what could have been just a happy-go-lucky kids’ book.

“Being able to be scary and redemptive at the same time, and teach a lesson, an enduring lesson, to everyone—it was a wonderful thing for Dahl to have done, and it was one of the things that attracted me to want to direct this Dahl book…Without that dark center, where is the redemption, and how do you bring all of us out from the bowels of a nightmare into the most beautiful, enchanting dream we’d ever seen?” said Spielberg about Dahl’s book in the press notes provided by Disney.

Look for ways to balance darkness with redemption and evil with kindness and your script will have the story heft that Speilberg loves.

Many of us were told not to daydream when we were kids. As writers, daydreaming is our biggest asset and the key to writing a screenplay that will blow minds. “I don’t dream at night, I dream at day, I dream all day; I’m dreaming for living,” Spielberg has been quoted as saying.

We see this life motto translating into cinematic wonder. In the film, the Big Friendly Giant collects dreams and stores them in jars, emphasizing how important dreams are to humanity, or “human beans” as he calls them.

Even if you’re writing a crime drama or romcom, allow yourself to daydream about your characters. You might find new inspiration in how you shape their lives by letting your mind wander. No. 3 — Take your time getting to the good stuff

In fact, writing a screenplay is more about rewriting, since you’ll most likely spend a lot more time fixing your script once you’ve typed it into Final Draft.

Spielberg has also been quoted as saying, “All good ideas start out as bad ideas, that’s why it takes so long.” Don’t judge yourself, just keep working on your idea until it feels authentic to you. Then rewrite, rewrite, rewrite. Of course, that’s easier said than done, but if you’re part of a writer’s group or like to get feedback from others, ask your readers if they were bored at any point while reading your script.

If so, go into that area of your story and spice it up. “The thing that I’m just scared to death of is that someday I’m going to wake up and bore somebody with a film,” Spielberg has also been quoted as saying. It’s a fear we all have, but there are ways to attack the problem. Get feedback and focus on the areas where you can improve.

No. 5 — You don’t need to attend a fancy film school

Legend has it Spielberg applied to USC’s film school, but couldn’t get in due to his poor grades. He attended Cal State Long Beach, but dropped out when he was offered a film contract. Making his first film as a 11-year-old to earn his Boy Scout photography badge, it was Spielberg’s passion and dedication that brought him success as a director, according to TIME Magazine.

If you have a passion for writing screenplays, it likely came from something in your own childhood. Think about what that might have been and how that manifests in your work as an adult.

Even with such incredible source material like Dahl’s book, screenwriter Melissa Mathison had to make additions and changes to make the story into a satisfying movie with a 3-act structure.

Spielberg also wanted to further develop the relationship between Sophie and The BFG. About story structure, Spielberg has been quoted as saying, “People have forgotten how to tell a story. Stories don’t have a middle or an end any more. They usually have a beginning that never stops beginning.”

Make sure the second and third acts of your screenplay are fully developed. Act one should ask a question that gets answered in act three. In The BFG, Sophie is an orphan and wonders if she’ll ever feel part of a family in act one. In act three, we see her living in a little cottage next to the giant, with whom she has developed a very close relationship, becoming his family. In addition to watching movies, it’s important to read screenplays as well. But don’t forget about books. Yes, those things collecting dust on your shelves. Reading opens your mind, stokes your creativity and helps to understand points of view that are different than your own. As Spielberg said in his 1986 Oscar acceptance speech, “But only a generation of readers will spawn a generation of writers.”  It’s true.

What have you learned from Spielberg over the years? What are you favorite story moments from the iconic director?

5 Replies to "Spielberg gets all Spielbergian on The BFG: 7 great story tricks we learned from the cinematic giant"