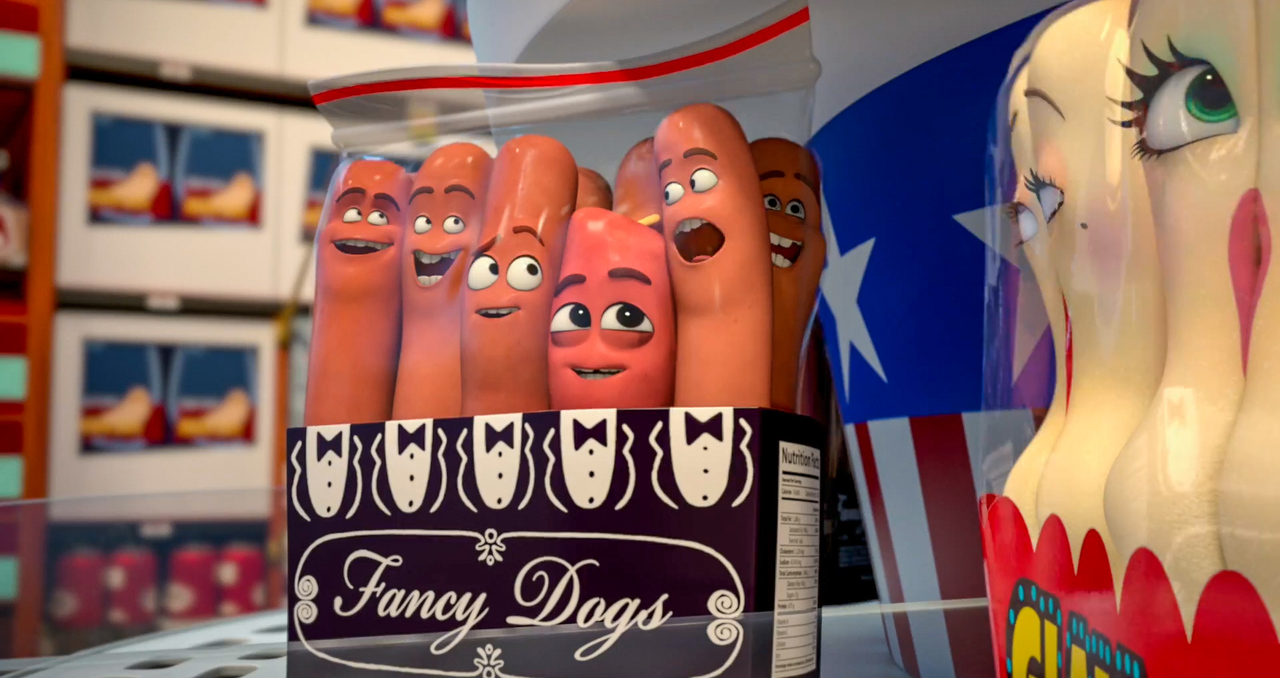 Sausage Party is an R-rated animated film for adults that has a lot of fun turning the sacrosanct Pixar genre on its head. Then, slashing it with a knife. Then lighting it on fire, while throwing in some social commentary on the Israel/Palestine conflict. Yes, the movie does all those things and then some.

Critics seem to love this film because the writers — Kyle Hunter, Ariel Shaffir, Seth Rogen, Evan Goldberg and Jonah Hill were all credited on IMDB — know the Pixar films so incredibly well that they were able to tweak little parts to the story to great comedic effect.

When we break down the components, we see how very close Sausage Party is to an actual Pixar film. Only, it’s definitely not a Pixar film. Can you see where we’re going here? There are things in this movie I can safely say have never been seen before on a movie screen, but there’s also some tried and true storytelling that gives this film its emotional core. And from that comes the comedy.

Let’s take a closer look at the 7 ways the Sausage Party filmmakers teased a Pixar story but then took it to the extreme. No. 1 — The secret life of things around us

Again and again, we see Pixar movies exploring this theme – from cars, to toys, to fish, to emotions, Pixar gives a voice to things we don’t expect to be like humans but somehow are just like us.

Sausage Party spoofs this theme by detailing the secret life of perishable food at the grocery store. You can use this easy trick to explore the things in your life that don’t have a voice. What feature film ideas can you come up with using this concept?

No. 2 — Use music to express emotions

The filmmakers wisely chose renown Disney composer, Alan Menken, who’s know for his musical contributions to films like The Little Mermaid, Beauty and the Beast and Tangled, to write the opening song called, “The Great Beyond.” It sets up the longing the edible characters have to leave the supermarket and go to a place that they think is a heavenly existence.

Seth Rogan says, “The song is kind of like a prayer that outlines their belief system. The food sings this song every morning to reaffirm the thought that it’s good to get chosen,” in a press release from Sony.

Getting Menken to write this song gives the film a Disney authenticity it wouldn’t otherwise have, adding to the genius of the project.

No. 3 — Establish a likable hero

Like most Pixar films, Sausage Party also tells the Hero’s Journey. Our hero is Frank the sausage (Seth Rogen), who longs to be taken to the “great beyond.” But the journey won’t be easy for Frank – he’ll have to prove himself time and time again.

We like Frank because he’s an everyman – er, every sausage, I guess.  He’s kind to his friends and has a big heart, just like every other Pixar protagonist, and right away the audience roots for him. You can use this technique on your own films. Does your protagonist have good intentions? Does the audience like him or her and support the goal?

We soon meet Brenda the bun (Kristen Wiig), who becomes Frank’s love interest when the two are both placed into the same shopping cart. One of the ways Frank will need to prove his heroism is by risking his life to save the fluffy bun he loves.

The point of the Hero’s Journey is for a young man or woman to become a fully-realized adult. This is accomplished at the end of the film for both Frank and Brenda when they consummate their love –  a reward both have earned. By definition this is a parody of a Pixar film. That means the writers should have chosen a message or theme for the film that is very close to the type of them Pixar would choose, but then the writers need to corrupt that theme.

Instead of using “the importance of family,” which audiences see explored in Pixar films like Finding Nemo, the message in Sausage Party is the power of truth. This movie not-so-subtly lambasts religion and the belief in the afterlife. Characters called the non-perishables reveal this hard-to-swallow truth by explaining to Frank that the world outside of the grocery store is so horrible, they had to make up lies to keep the foodstuffs happy while on the store shelves.

Otherwise, there would be riots in the aisles and society would break down. In this film, religion is the opiate of the groceries. Consider the theme of your film. What is it you’re trying to say and how can you bring that message into every scene, character and piece of dialog? No. 6 — An outrageous villain

While we’ve seen all types of antagonists in Pixar movies, from witches to giant squid, Sausage Party required a real douche bag of a villain that would shock and surprise the audience.

The screenwriters chose an actual Douche (Nick Kroll) – yes, the feminine hygiene kind. The double meaning of the word douche makes this one of the most hilarious antagonists I’ve ever seen. This is one piece of the story the Sausage Party does extremely well, particularly for its unpredictable outcome.

There is another antagonist, a Druggie (James Franco), whose substance-induced hallucinations actually ground the outrageous story – at least for a short period of time – because talking wieners make sense in a drug-fueled consciousness. Though the Druggie’s more of an obstacle than a true villain, he provides a bit of context as to how the rest of world – not just food – are suffering. Reality sucks and should be avoided at all costs.

That brings us to our depraved but celebratory conclusion to the story.

Because the sausages and buns were doing their best to adhere to modest principals like chastity, consistent with Christianity, throughout the movie, all the food characters descend into a Bacchanal of carnal delight once they discover they’ve been told a bunch of lies and their lives may be over any day. This is their arc.

Their new knowledge of the truth allows hedonism to reign supreme, reinforcing the theme that life is a bitch and then you die. Might as well have fun while you can. Isn’t that the adult fairy tale we all want to experience?

How can you do what the writers of Sausage Party did, learn from the best and then put it on its head? We’d love to hear how you’re doing this with your films.

What Do People Mean By 'Voice,' Anyway?

12 Replies to "Sausage Party: 7 ways the film adheres to Pixar rules then totally destroys them"