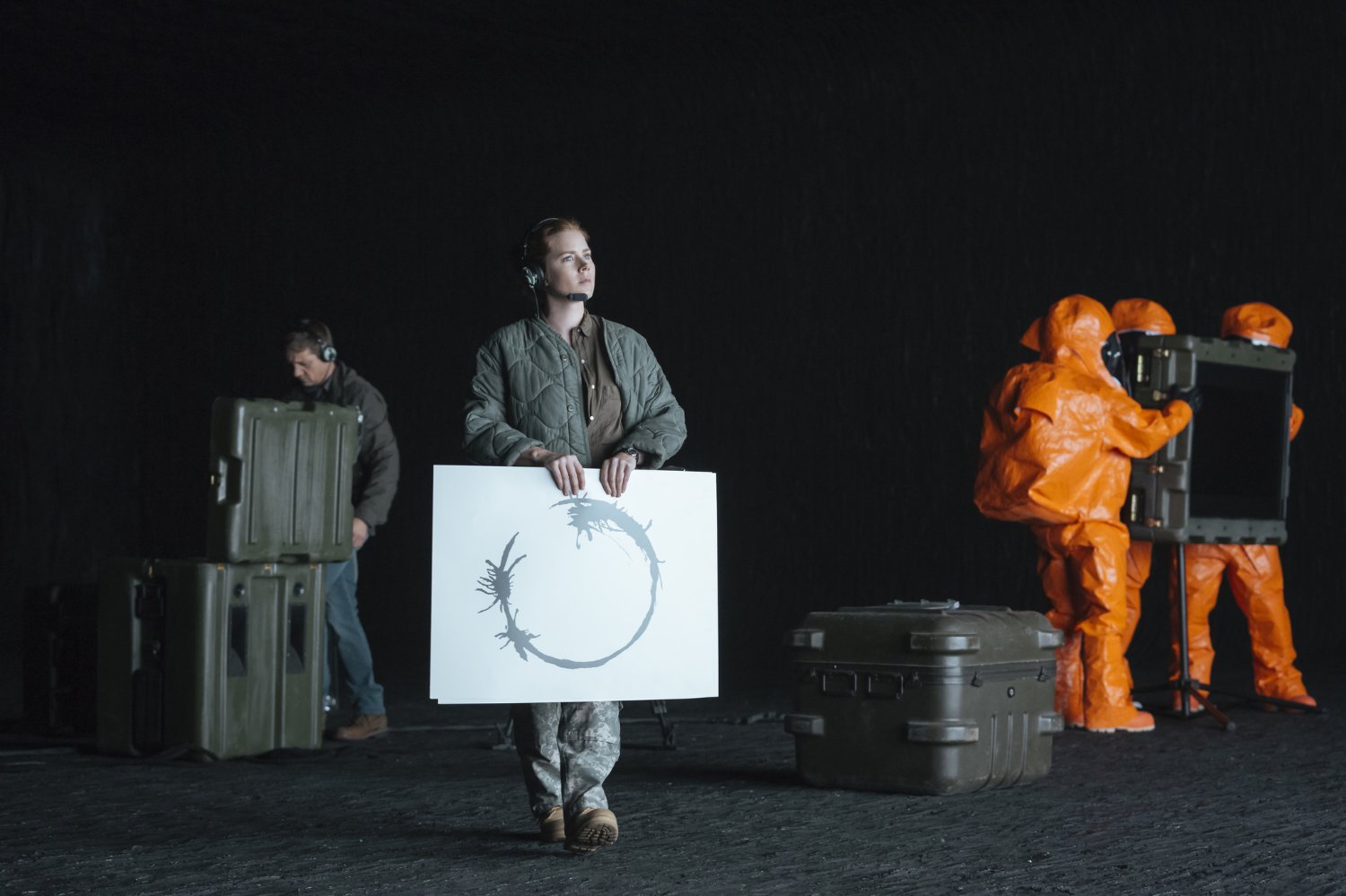 Arrival screenwriter adds drawings of his own language to script Based on science fiction writer Ted Chiang’s short story “Story of Your Life,” Arrival is an emotionally powerful exploration of humanity and its ability to communicate, sometimes very clearly and sometimes, not clearly at all.

This alien-invasion story is told through the eyes (and tongue) of a linguist, Louise (Amy Adams), as she attempts to make meaningful contact with a pod of seven-limbed creatures from very far away. If communications go poorly, it could spell the end of civilization as Louise knows it. It’s an understatement to say she needs to get this right.

Everything in this film is circular in nature. From the aliens themselves, called heptapods in the movie, to their language that appears in smoky rings, to all of Louise’s flashes (both forward and back in time). It’s no surprise the screenplay structure would also be circular. For screenwriter Eric Heisserer, following this unconventional structure was both helpful and a hindrance.

“I didn’t have another structure that I could look at, or another format that fit what I was trying to build. But I did know that it fit so well with the non-linear orthography – the way that the heptapods communicate – it was just a natural building block to use.” If you’re asking yourself what non-linear orthography is, let us break it down. Orthography refers to the set of symbols used in writing a language, and the rules about how to use those symbols. English has linear orthography, you read from left to right, and there are rules about when a word or sentence ends. In the film, the heptapods communicate in circles, so their words and sentences do not have a clear beginning, middle or end.

If this is starting to sound a little too cerebral, Heisserer wants to assuage your fears.

“From the start, I wanted to create something that was emotionally effective first. The cerebral element was secondary to that. It wound up being just as important, of course.”

I can honestly say the filmmakers succeeded, though nothing was spoon-fed to the audience. Following the story requires the use of brain cells and in today’s climate of dumbed-down superhero sequels, that’s a good thing.

In fact, Louise’s deep dive into alien linguistics was cut from the movie. Though it is implied that Louise does successfully crack the code of the alien language, we aren’t privy to her ‘Eureka’ moment. “Sadly, it was a piece that got lost along the way because it felt too academic. It felt like we were hurdling toward a $50 million Ted talk about language instead of the story we were trying to tell. That happened to be a piece that I felt more attached to simply because I’m a believer in science, especially in the science of language, and I love process. But at that stage, it was about trying to make the story as aerodynamic as possible,” he said A drawing of Heisserer’s orthographic language that he inserted into his script.

As adept at language as Heisserer is, there was a time when words failed him in the script.  “I dug into how to express on the page a language by an alien species that perceives time differently than us, which I why I wound up with that circular iconography.” As he tried his best writing it in descriptive words, eventually he started using his own graphics. “I couldn’t put them into Final Draft, but I could make a PDF and put them into that. The more drafts I did, it ended up creating a lot of extra work for me. If only I could have put the graphics in Final Draft!”

Heisserer had his own lost in translation moment while making the film. In the script, he has Louise say something in Mandarin to the Chinese General. Not knowing Mandarin, Heisserer didn’t include what the line should be. When the director, Denis Villeneuve, hired a Mandarin translator to help Amy Adams learn the line, he called Heisserer to find out what the line should say. Heisserer admits he was caught off guard.

“I told him I didn’t know what the line was and he stopped and said, ‘Eric. This is the line that saves the earth. The most important line in the whole movie. I need this now.’ I had a panic attack, was sweating bullets, running around trying to figure it out. I sent him a whole bunch of options and we finally agreed on one. But when I went to the Toronto screening to see the final cut, I discovered that Dennis (Villeneuve) decided not to use subtitles for the most important line in the film!”

So what was the line? “In war, there are no winners. Only widows.”

What Can You Learn From Reading Produced Screenplays

What Can You Learn From Reading Classic Screenplays