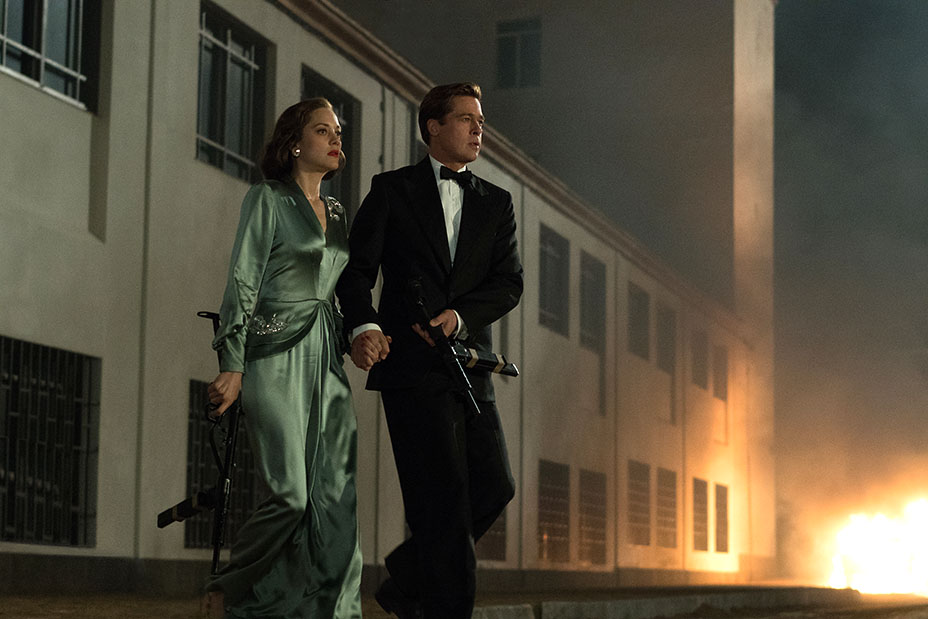 Max (Brad Pitt), is a Canadian spy working on a secret mission with a French resistance fighter, Marianne (Marion Cotillard), in Morocco in World War II. After the two operatives fall in love in the middle of a dangerous sandstorm in the Sahara desert, their lives become irrevocably intertwined. Can these two masters of deception leave the double-dealing behind and live like a normal family? Or will suspicion and deep-rooted loyalties torpedo their lives? These are the painful questions the Academy-Award nominated writer Steven Knight explores in his new film, Allied.

Best known for films like Dirty Pretty Things, Eastern Promises, Pawn Sacrifice and the upcoming sequel to The Girl with the Dragon Tattoo, Knight reveals that Allied is inspired by a true story that’s been haunting him for years.

“It’s been like a stray dog outside my office for 30-odd years, I always knew it would make a good story,” says Knight.

After college, Knight and his then-girlfriend spent some time in Texas with her family.

“I got talking to her auntie about her brother. She told me this extraordinary story about how he was working behind enemy lines when he met a French woman and fell in love. She became pregnant and he got special permission to bring her home. After the baby was born, it was discovered she was working for the Germans. He was given a gun, told to go…” Unable to finish the sentence, Knight gestured with his hand to imply that the man was to shoot her. Though Knight kept the story to himself for decades, he finally wrote the screenplay about five years ago. It then attracted Brad Pitt and Marion Cotillard to star and Robert Zemeckis to direct. “It was worth the wait because we got the best possible people.”

Taking the time to gather life experience also helped Knight sculpt out the complex and cryptic characters of Max and Marianne as they deal with messy emotions and powerful loyalties. It’s easy to say that all’s fair in love and war, it’s another thing to know betrayal first-hand.

“By the time I wrote it, I sort of understood people more, relationships more, betrayal more. All of those things – you get knocked around in your life and that helped me get inside the heads of both of them.”

Allied has many delightfully striking similarities to Casablanca, and they were no accident. Knight took a lot of inspiration from the 1942 film, including setting the beginning in Morocco. “It needed to take place somewhere other than France. Obviously, I feel that certain films were made at a time when there was good and bad – universally accepted good and universally accepted bad. You see a swastika and you know that’s bad. Casablanca has a very flawed hero, probably for the first time, probably via Hemmingway. You had a flawed hero who, in the end, did the right thing. It’s all about loyalty to country and war. Obviously, the heat and the fans and the wicker chairs make a beautiful environment, but I wanted to key into some of that because I was keen to do a film that was about human beings and their relationships.”

I couldn’t help but ask Knight if he thought Casablanca could ever get remade. He smiled and shook his head.

“The problem is, it’s too good. If it was a little less good, even just a little bit, someone would probably do it. But no, you’d be setting yourself up [for failure].” World War II may be long over, but Knight believes the war’s many lessons still resonate today, especially with Britain facing Brexit and the U.S. being divided by the recent presidential election.

“Any film about war and the possibility of the reconciliation of two sides is probably a good thing at the moment. I can’t pretend that I had a crystal ball and knew what was going to be happening, but you do feel you hear the march of the morons towards conflict. The drumbeat is starting. Anything you can do to heal that is great. I think it’s up to writers and artists to hold up a mirror to show what’s going on.”

Five Myths of Being a Screenwriter

2 Replies to "Steven Knight’s new film Allied, holds up a mirror to our own divided world"