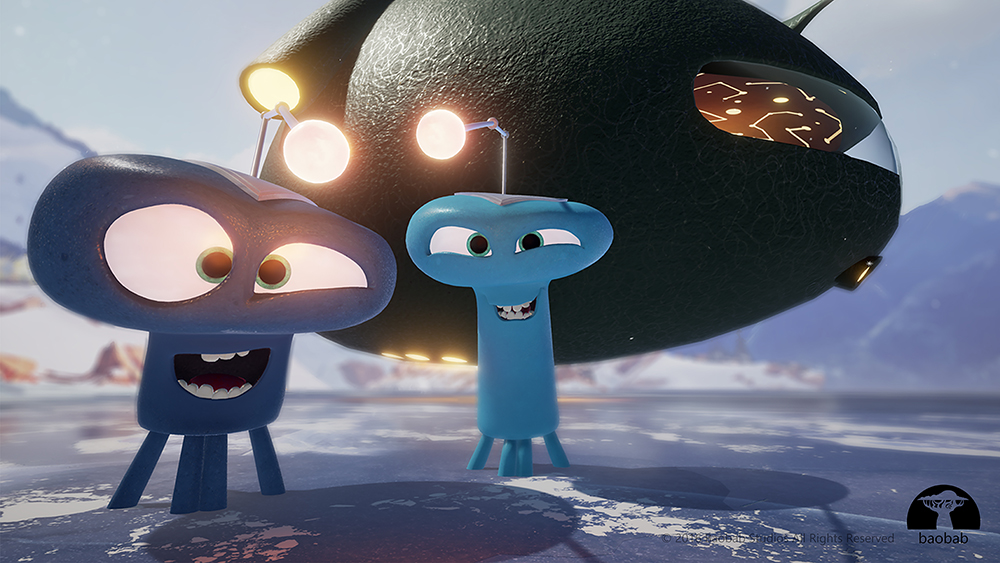 Virtual Reality Is Here to Stay and It Needs Screenwriters (PARK CITY, Utah) — Sundance Film Festival 2017 was all about virtual reality. It was everywhere, so if you think VR is still a thing of the future – think again. VR is here, and it needs screenwriters.

In a condo just off Main Street in Park City, I was lucky enough to participate in the VR experience Astroids!, a 360-degree animation.  Astroids! is the sequel to Baobab Studios’ first VR project, Invasion!, that won tons of awards including Tribeca Film Festival’s 2016 “VR Selection of the Year” and featured the voice of Ethan Hawke.

Asteroids! is about a pair of cute aliens, Mac and Cheez (Elizabeth Banks), a Laurel and Hardy type duo, and their robot-dog sidekick, Peas. Because the story is interactive, I would take on the role of a helper robot that would be tasked to save one of the characters when asteroids hit the spaceship. It sounded like a lot of responsibility for someone who’s used to sitting in a theater seat and simply watching a movie while shoving popcorn in my face, but I was eager to give it a go.

In addition to donning VR goggles and headphones, I was given two Wii-like controllers to hold in each hand to help me interact with the other characters. The experience lasted a mere eight minutes, but seemed much longer, partly because I felt so immersed in this new world of an animated spaceship. Overall, it made me laugh numerous times and I can honestly say it was a blast. Written and directed by Eric Darnell, the co-writer and co-director of Ants, and all the Madagascar movies, Asteroids! doesn’t just engage the participant physically (playing fetch with Cheez), but it engages the participant emotionally as well. There are actual stakes in the story – the survival of one of the characters – that depends on how the participant interacts. That’s where the screenwriting skills really kick in. Both Darnell and Baobab Studios CEO, Maureen Fan, say following a three-act structure is imperative.

“If you deviate from the three-act structure, your brain doesn’t release the chemicals the way it would otherwise. It’s literally in our DNA, so you release cortisol and oxytocin to help you bond with other people at certain points, and you have to follow that three-act structure to make it work,” says Fan.

“This is a time-based art form. It’s based on structure, pacing and rhythm and building to that emotional epiphany, just like every great script does,” adds Darnell.

According to Darnell, the main mission of Baobab Studios is to turn empathy into compassion and action. “We never want to have so many VR bells and whistles or gimmicks getting in the way of telling a story.” As experienced of a screenwriter Darnell is, he admits there was a learning curve for writing VR. “We had to find a way to include the viewer in the process.”

A VR script is written in the second person. Directions would read, “You are walking onto a spaceship. You see Peas run up to you.”

Though it sounds like a simple shift, remember that a VR experience is 360-degrees and it’s up to the viewer to decide where to focus their attention. That can be a problem if the story depends on the viewer engaging with a particular character. Rather than say, “Now you’ll look at this,” they way they do in movies by cutting to close-up, Darnell wants to inspire the viewer to make the choice to look at the thing he wants the viewer to look at. He actually studied how magicians use misdirection to gather techniques to guide the viewer.

“You can’t really describe VR, you have to actually put that headset on. A certain percentage of it goes deep into our brain, I call it the reptile brain. When I stand on the edge of a building or cliff in VR, to this day, I’ve not been able to take a step, even though I know I’m standing in my office. My reptile brain says, ‘I’ve kept you alive this long, you’re not going to do that!’”

It’s not going to be the same experience of sitting with a large group of people in a movie theater, but there still could be some value – we just have to explore that.

With IMAX announcing that they will create half a dozen VR centers later this year, Darnell recommends screenwriters start exploring the world of VR now.

“For the price of a night out on the town, you can get a headset that will work with your phone so you can see what people are doing. Watch as much VR as you can so you can learn what types of stories work and what types don’t.”

Success in this genre comes down to the same things movies thrive on – engaging characters and a good story.

“We need storytellers. If you’re already a great screenwriter, you can figure out the tools to write for VR, but you have to have a foundation in story,” says Fan.

“Some people think you should only tell stories that can only be done in VR. But I think Shakespeare was pretty great. I’d love to see a Shakespeare VR,” says Darnell.

Are you interested in writing VR, if so let us know. We’re just as curious as you are!