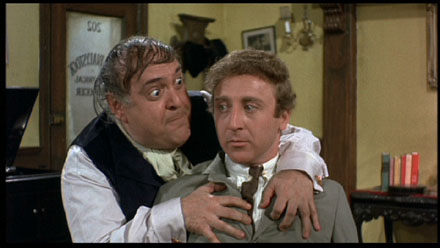 In the Beginning… There Was the Joke

By: Peter Desberg and Jeffrey Davis

If you are writing comedy, or drama, and want to get a laugh, it’s tough to avoid jokes. There is both craft and talent involved in joke creation. To make this article more interesting, we sat down to write without a specific joke in mind. Instead, everything you read here was created without forethought using the steps we’ve described (This will probably become more obvious to you as you read on). To make things a bit more interactive, you might want to play along and create a joke for yourself following each step as you read. Begin writing a joke by identifying the topic you want to write about. Based on two of our favorite humor sources (Sigmund Freud and our friend and stand-up coach Greg Dean) the topic should be something that gets you frustrated or angry.

Your topic shouldn’t be too broad or too narrow. If you picked Hollywood as your topic, you would find that it’s way to unfocused and wide ranging. If we decided to talk about the furniture you find in the waiting room of most agents, that’s going to be a bit too constricting.

For our purposes, we’re selecting Hollywood Literary Agents (Without them, it’s pretty tough to sell a script.). Step 2 – Free Associate about the topic

When you sit down to write a joke about a topic you’ve selected, chances are that if you wait to think of a funny joke that comes to you, you’ll be staring at a blank piece of paper for quite a while. The way to open things up is to free associate about your topic. It’s tempting to jot down two or three items so you can move along. Bad idea. It’s during this free association period that a lot of funny ideas will start popping into your head. Be expansive. Here are a few thoughts we came up with about agents: Step 3 – Select one of your associations and identify it’s opposite.

This will lead you to the most difficult step in joke writing – the setup. We will use Agents have no Ethics. We like this because it’s short and we don’t have to type as much. Its opposite is that agents have ethics. The model we are using here is referred to as the Two Story Model of Joke Construction. The first story is intended to mislead the audience. Here’s our setup:

We are preparing the audience to receive an example of agents acting ethically. We are leading them away from the idea of the joke. Since most people who know agents view the behavior of agents as unethical, we are making use of that assumption in our misdirection for the setup. The stronger the natural assumption is, the less they will see the punch coming. Demolish the assumption in the setup with a contradictory thought, presenting the view of the target we first selected.

“Agents are scrupulously ethical…when they think they have been wronged.”

“Agents are scrupulously ethical…when everything goes their way.”

“Agents are scrupulously ethical…when their kids are around.”

“Agents are scrupulously ethical…when negotiating for an unimportant client.”

“Agents are scrupulously ethical…between the hours of 3 to 5 AM.”

“Agents are scrupulously ethical…if it doesn’t cost them anything.”

“Agents are scrupulously ethical…until they understand the issues.”

Once you create a setup, it’s easy to follow it up with a punch. Here are just 10 quick ones. It’s only word count limitations that prevent us from coming up with more.

Once you’ve created a joke, the question is how does it enter your script? Use caution because jokes can get in the way of a good story. Jokes must meet two criteria before putting them into your script. Jokes should advance the story and come out of character. You must learn to think of jokes as disposable. Even if a joke is hilarious, you must flush it if it doesn’t meet these criteria.

The Danger of Competing Projects and How to Protect Yourself

Peter Desberg and Jeffrey Davis are the authors of Now That’s Funny! The Art and Craft of Comedy Writing, a new book that provides an intimate look into the minds of twenty-nine of Hollywood’s funniest comedy writers from movies and TV shows like: Saturday Night Live; Frasier; The Simpsons; Everybody Loves Raymond; Monk; Modern Family; The Honeymooners; Cheers; Home Improvement; and many more. The writers were asked to develop a generic comedy premise created by the authors, giving readers a window into their writing process. There were no rules, no boundaries, and no limits. What emerges is an entertaining look—illuminating and hilarious—at the creative process behind hit comedy TV shows and movies. Learn more by visiting www.nowthatsfunny.lol and follow them on Twitter: @nowthatsfunnybk.

7 Replies to "In the Beginning… There Was the Joke"