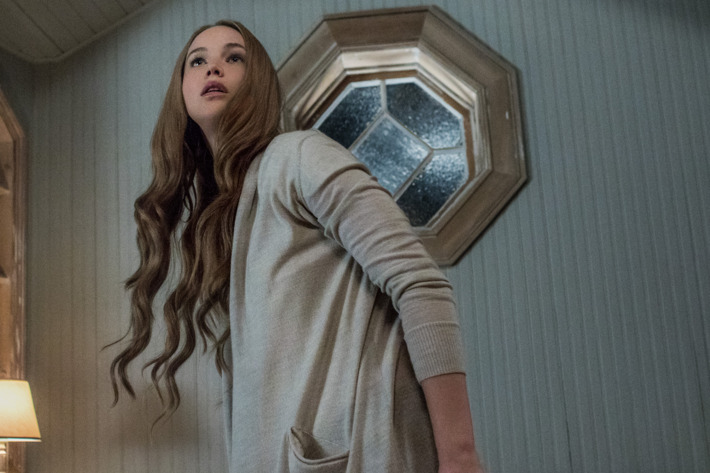 Five things I learned about screenwriting from Mother! If you’ve seen any of Darren Aronofsky’s films (Black Swan, The Wrestler, Requiem for a Dream, Pi), there’s no doubt he has a dark mind. But seeing his latest film Mother! makes me think he’s only just begun to tap into his own psychological agony.  Be warned – this movie isn’t going to be everyone’s cup of tea (it gave me nightmares) – but there’s no denying Aronofsky’s a genius storyteller.

Mother! is about a poet (Javier Bardem), struggling with his own creative process when he loses interest in his lovely, young wife, called Mother, (Jennifer Lawrence), who’s usually the main source of his creative inspiration. She loves him, maybe too much, and works tirelessly and selflessly to restore their home that had previously burned down.

Though the film starts off as what seems to be the examination of how the creative process plays out inside a marriage, Aronofsky, who wrote the first draft in five days, has made it very clear the film is really an allegory, saying, “For me, it was about telling the story of Mother Nature and giving the audience this subjective experience of what it was like to be the giver of life.”

There are many themes and metaphors in the story, so it’s really up for interpretation. Here are five things I learned about screenwriting from the movie. No. 1 — The setting is crucial

If you’ve ever written a contained horror or thriller screenplay, you know the importance of the setting. If you’re new to the “contained horror” genre, it means the bulk (if not the entire film) takes place in one location where the protagonist is essentially trapped. Some examples are 1408, where John Cusack is trapped in a haunted hotel room, The Beguiled, where a soldier is trapped at a girls’ school, and Rear Window, where Jimmy Stewart is wheelchair bound in his apartment. The point is for the location to feel claustrophobic and dangerous. Sometimes the protagonist gets out, like in 127 Hours, and sometimes they don’t, like in Open Water.

In Mother!, the film takes place entirely at a remote country home that is octagonal in shape. Octagon houses were popular in 1850s America and some still remain. The shape of this home is critical to the narrative because it allows the protagonist to swirl in repetitive circles through the house, unable to stop the chaos that descends upon her.  Repetition is key in this movie, one of the major themes, and the setting helps support the story.

But Aronofsky chose an octagon house for an additional reason: the significance of the number eight in Judaism. In kabbalistic teachings, the number seven represents natural perfection. The world was created in seven days, there are seven colors in the rainbow, etc. The number eight, however, represents something that is outside of nature, a supernatural event or entity. Mother! takes the premise of a poet’s creative process and turns it into something hideous and grotesque, something wholly unnatural. Take the effort to set your screenplay at a location that will help you tell your story both visually and thematically. No. 2 – Creating the house as a character

The octagon house is very much a living organism in this film – it audibly groans, it bleeds, it has bowels under the basement. Lawrence is barefoot throughout the film so she can “feel” the house and attend to its needs. This relationship between the protagonist and the house is vital to the story, especially as it becomes a metaphor for the creative process or Mother Nature, depending on your interpretation.

Other films with locations that truly become a character include Allerdale Hall in Crimson Peak, the Dakota in Rosemary’s Baby, and the Overlook Hotel in The Shining. While those are all examples in the horror genre, the trope can be used in other genres as well.  The Palace Bristol in The Grand Budapest Hotel, Mars in The Martian, and Las Vegas in The Hangover all create defined characters in these non-horror films. No. 3 – Give your protagonist and antagonist a strong fatal flaw

We love the protagonists we create, but it’s important to make them less than perfect. Mother’s flaw is that she gives too much of herself to others. While being selfless can be seen as a virtue, it can backfire when you have nothing left to give. The stakes for Mother are change or die.

For Bardem’s character Him, his fatal flaw is needing to be loved by others – at any cost. His stakes become change or risk losing everything and everyone around him. If you’re writing a character and not sure what to give them as a fatal flaw, take a look at your own flaws. Writing from a place of vulnerability is always a good idea, and if your character can arc through the flaw, so can you.

As I often say, audiences today are highly sophisticated and want to be surprised. Whatever genre you’re writing in, try to give your audience a new experience. World War 2 movies constantly get made, but Dunkirk told the story of a specific rescue mission, keeping typical players like Winston Churchill and the Nazis out of frame.

Mother! is certainly one of the darkest films I’ve ever seen, but I can appreciate that Aronofsky doesn’t cop out with a happy ending.  He literally goes down into the depths of hell. The film shows its characters at their worst and the horrific visuals follow. At one point, a toilet gets clogged. Mother goes to plunge it, discovering the clog is not from feces but from what appears to be a human heart. The image is appropriately disturbing but also novel, making it a fresh image for the horror genre. It also makes a great metaphor and good example of “show, don’t tell”: Mother’s heart is literally getting flushed down the toilet.

When stories get dark, adding a few moments of comic relief (up until the end of the second act) can really keep the audience emotionally involved in the story. Michelle Pfeiffer plays Woman, the wife of Man (Ed Harris), who both show up at the home unexpectedly. Pfeiffer is witty, sexy and sarcastic in a rebellious teenager kind of way. Her retorts, eye-rolls and pokes at Lawrence add much needed humor that stays aligned with the tone of the film. If you’re writing a drama or horror script, think about including a character that can provide these funny or witty bits to help give the audience a break from all the drama.

Mother! opens September 15. Are you going to see it?

7 Replies to "Five things I learned about screenwriting from Mother!"