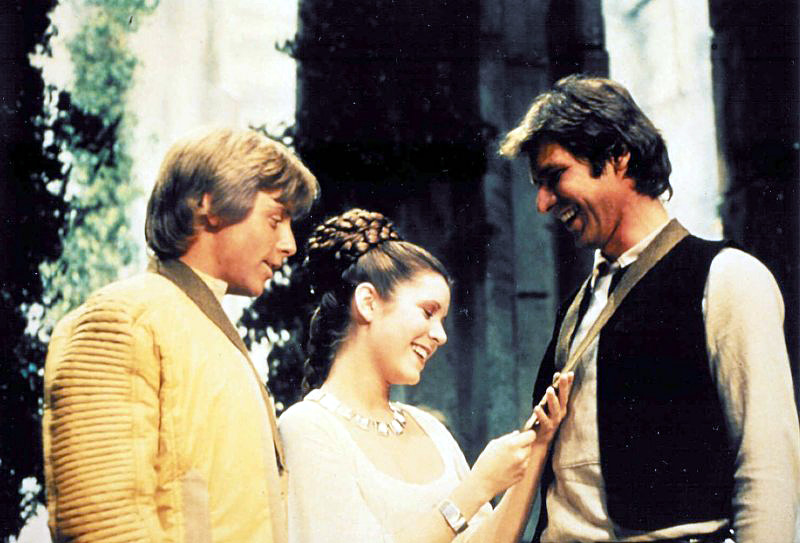 Not every movie is told the same way.  I thought I’d talk about five basic film structures, and give a few examples for each different structure.  When you are thinking about how best to tell your story, you might consider trying one or two, or even all five of these methods. Typically, a movie has a beginning, a middle, and an end, all in chronological order.  The Star Destroyer chases the Corvette.  Leia stows away the Death Star plans on Artoo.  Luke’s uncle buys Artoo.  Artoo runs away.  Luke meets Ben.  His aunt and uncle are killed.  Han Solo takes them to the Death Star.  They rescue Princess Leia.  Luke blows up the Death Star.  Medals!  So, that’s a typical structure.  A-B-C as some might say.  Oh, sorry if I just ruined Star Wars for you.  This is a linear story.  It’s a very good way to tell a story.  If you’re a first time writer, I highly recommend writing a linear story.  No need to start your juggling career with chainsaws. Take this bowl of apples.  Write your story from beginning to end without any tricks. What’s fascinating about the structure of The Godfather: Part II is that it is simply A-B-C storytelling… but it’s doubled.  Two simultaneous chronological storylines that take place in two different periods of time.  The most difficult part of this method is knowing when to cut back and forth between timelines. However, as a writer, it’s not the end of the world if you do not get this one a hundred percent right, because even with The Godfather: Part II, the initial cut did not work because it was cutting back and forth too much.  It may have worked on the page, but it didn’t work in the edit. Famously, they simply doubled up every edit, staying in each timeline for twice as long, and it worked.  My writing partner on Sidney Hall, Shawn Christensen and I took it one step further, telling three simultaneous stories.  And exactly as it was with The Godfather: Part II, our edit in the script didn’t quite work and we had to make adjustments.  However, as long as you’re telling two, three, or even four good stories in your timelines, you should be able to find the right edit. This kind of movie starts at a given point and time, and then, rewinds back to the beginning and begins to tell the story with a SPECIFIC point in time.  We are now catching up to the moment that started the film.  Often times, your protagonist will serve as a narrator.  A perfect example of this kind of structure is Fight Club. Spoiler Alert, I’m going to spoil Fight Club for you now.  We begin with Ed Norton and he has a gun in his mouth.  Then we rewind back to Jack trudging through his mundane life.  He meets Tyler.  They start a boxing club.  They fight over a girl.  And then we reveal that Tyler is the narrator and we catch up to the beginning of the movie.  Get it?  The Ketchup! There’s nothing more interesting than not knowing when something is happening in the continuity of your story.  Quentin Tarantino is the master of this.  He won an Oscar for Pulp Fiction which is really the defining version of this story. We all remember watching John Travolta getting killed as Bruce Willis’ Pop Tarts sprung from the toaster.  We were like, what?  That’s how they kill this main character who just brought Uma Thurman back to life with OG Marty McFly?  But no, we actually get an entire third act that takes place before the second act.  This third act is actually also a Ketchup structure.  Because we open and end in the diner.  But in the middle, we’re all over the place.  Pulp Fiction is scrambled eggs AND ketchup.  Who doesn’t love ketchup and eggs?

Chris Nolan started at the end of his movie, telling the story backwards, while also starting at the beginning of the story, telling the journey forwards in Memento.  This is a riff on The Godfather: Part II simultaneous timelines method, but with the twist of going backwards and eventually meeting in the middle. By making one part of the story black and white, and the other part in color, you visually always know where you are.  But you have to make sure you’re telling a compelling story, and once again, know when to cut away.  By using such a complicated structure, you’re more restricted in what you can do in the final edit.  You have to be more exact to make something like this work, which is a great challenge.  It’s one of the reasons why I think Memento was absolutely robbed of an Oscar in 2001.  Wow, what a sensationally constructed screenplay.

There’s no wrong way to tell your story.  And these are not the only ways to structure your screenplay.  Be innovative.  Think outside the box.  Let me know in the comments some other structures that I didn’t mention.  As always, good luck and godspeed!
Prev post

2 Replies to "5 Ways to Structure Your Screenplay"