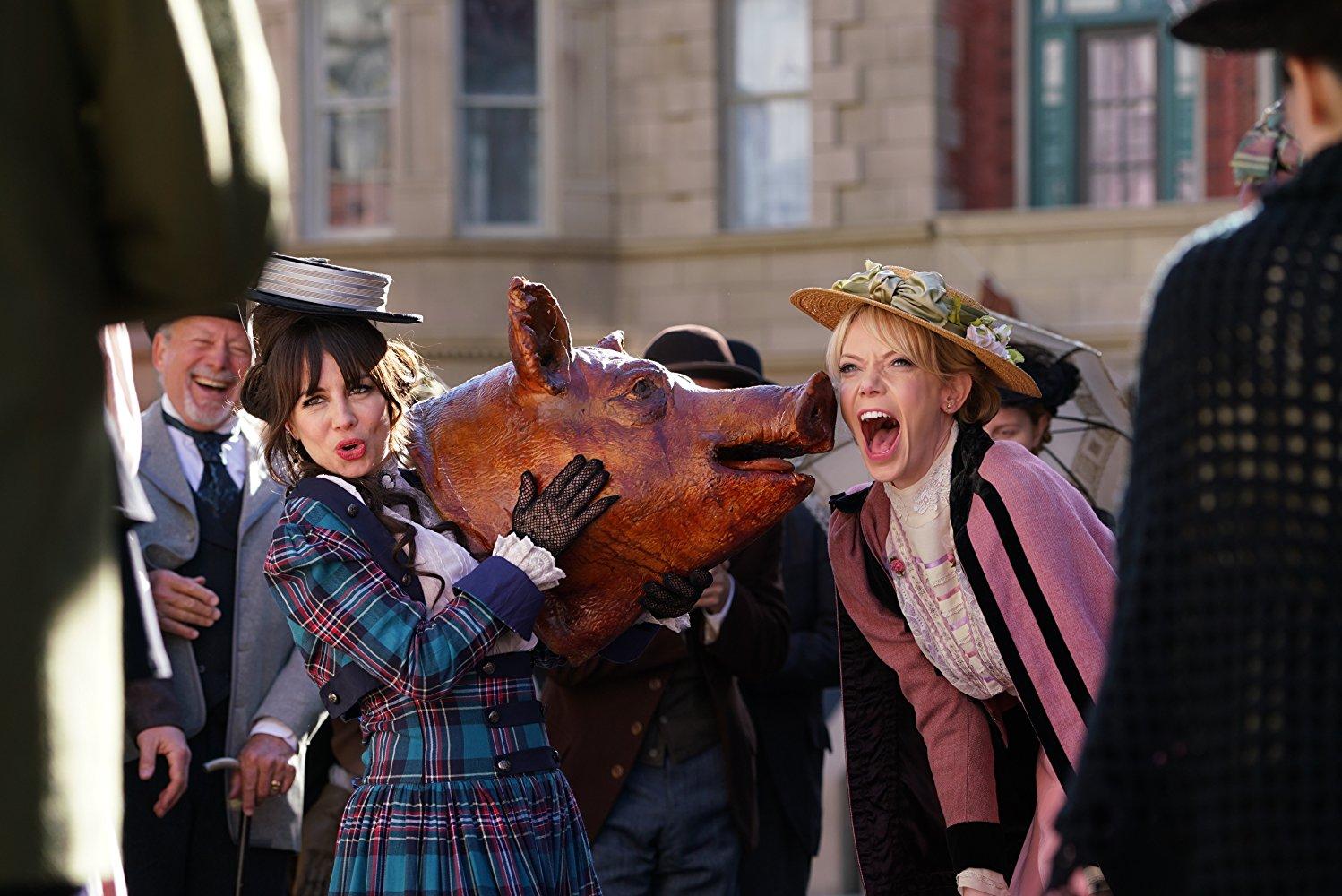 Comedy writer and actress Natasha Leggero, star and co-creator of Comedy Central’s Another Period, has a brand new standup comedy special on Netflix called The Honeymoon Standup Special. Not surprisingly, it’s hilarious. But I’d expect nothing less from the woman who owns every comedy roast where she flings scorching zingers from the dais. Check out the barbs she throws down in this roast of Justin Bieber:

You can tell from the clip Leggero is fearless and takes great joy in being politically incorrect  – something pretty rare these days. I was lucky enough to chat with Leggero about how she managed to carve out a career as a successful female comedy writer.

Leggero started out as a child actress, but not in the Hollywood sense. From the time she was eight, she was performing in regional theater in and around Rockford, Illinois.

“I was always the kid,” says Leggero, “who wouldn’t have to go to school but get to be the kid in Our Town, or Inherit the Wind. I grew up wanting to be an actress.”

Leggero earned her degree in Theater Criticism because the small college that gave her a scholarship didn’t offer acting classes. After that, she went to London and then New York, to study acting at the Stella Adler Conservatory for two years. But it wasn’t the experience she was hoping for. “Stella Adler basically qualifies you to be a working actor in the 1700s. They taught me all this stuff like how talk to the ba-a-a-ack of the auditorium.” She says loudly, demonstrating her ability to project her voice.

“So I had this very affected way about me. I got to L.A. and I would go on auditions for Bud Lite.” She offers the tagline, “It has drinkability,” in the most grandiose way possible, letting her tongue roll on the “bility.”

It’s easy to see why. Then one night, everything changed. She remembers seeing a friend she knew from New York doing standup at a comedy club in Hollywood.

“She was basically standing on stage, talking shit about things. I thought, ‘Well, I could just talk about how stupid everyone in L.A. is.”

When I ask her if it was really that easy, without missing a beat, she says, “Yes.” And a standup comic was born.

Leggero explains, “By the time I got to Los Angeles, my critical abilities had been sharpened and I’d become cynical about everything. So, comedy became a good fit for me.”

She also found plenty of comedic fodder when she worked as a cocktail waitress at West Hollywood’s famed Whiskey Bar.

“I would see these dumb people come in all the time who said they wanted to be actors. But all they had were hot bodies and the actress in me would get so incensed by it all. I felt like there was so much to react to. I’m not saying [becoming a standup comedian] was easy, but I did have a lot to respond to. For me, comedy is about having these crazy things happen to you or watching them happen, then processing it, and talking about it.”

Once she began doing standup, everything fell into place. Including, becoming a writer – something she claims she never intended to be.

“For me, writing has always been out of necessity. And only for me,” she says with a laugh.

I ask her to clarify what she means. “There’s a book called Moll Flandersabout this woman who’s a prostitute. She makes this distinction between women who are prostitutes by inclination or by necessity. So if I was a writer by inclination, it means that’s what I was meant to do. But I’m doing it more out of necessity because the only parts I would get cast as would be prostitute parts.”

The show Another Period, which Leggero co-created with actress/writer Riki Lindhome, imagines what it would be like for the Kardashians to live in the era of Downton Abbey. It’s silly, farcical, and laugh out loud funny.

To write the show, Leggero would imagine some of her favorite comedians as the character. Before she even asked Michael Ian Black to play Peepers, the abused butler, the character just came to life.

“Once you imagine that person, it starts to write itself a little bit. So that was easy for me.”

Leggero adds that to write a film or TV script, you can’t be a perfectionist – a lesson she learned from her writing partner Lindhome.

“I would want everything to be so perfect on the page and she would say it’s more important to just get a draft done. If you’re always worried about being perfect, you’ll never get anything out. So just actually get a draft done and then go back and make it great.”

While Leggero is still waiting to hear if there will be a season four of Another Period(fingers and toes crossed), she’s just completed a standup special with her husband Moshe Kasher. Both Leggero and Kasher have their own thirty minute block to do their routine focused on pregnancy and marriage, but for the last half hour, they perform a “couple’s roast.” They invite a husband and wife from the audience up on stage and proceed to give them “counseling.” It’s hilarious.

“I always wanted to give them actual advice. But Moshe was like, ‘We’re not doctors. We’re not qualified to be giving these people advice.’ So we turned it into just a fun roast that was really helpful and fun.”

The Honeymoon Standup Special is currently available on Netflix.