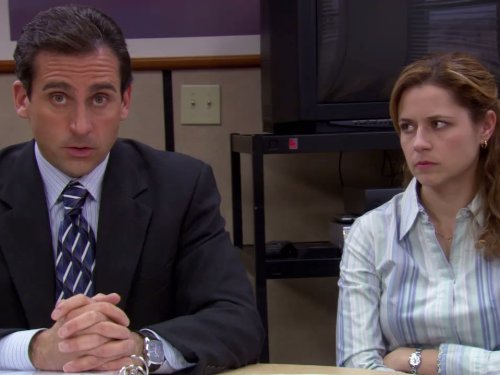 The name Brent Forrester may not be a household name like Judd Apatow or Ricky Gervais, but you certainly know his shows. After winning an Emmy for his work on The Ben Stiller Show in 1993, Forrester went on to first write for the American version of The Office for NBC, then direct the show, ultimately becoming showrunner, winning another Emmy in 2007.

If only there were a way to spend a couple hours with Forrester to absorb all the comedy writing knowledge he’s acquired over the years. Oh wait, there is! His show, Brent Forrester’s Comedy Knowledge Drop is playing at the Dynasty Typewriter in Los Angeles on July 29thand students pay only $5.

So why is he sharing his hard-earned knowledge for practically free? I sat down with him to find out. Turns out, he remembers the frustration of wanting to write great comedy but simply not knowing how. “I was a student once,” says Forrester, “and I was desperate for knowledge about comedy writing and I could never find anything that was of much value. I have yet to find any textbook with usable insights into comedy writing which is a surprise because there is so much that can be conveyed. In any craft you take up you’re going to collect concrete insights and information about how to do it. I’m certainly that kind of person.”

Surprisingly, Forrester claims he was never naturally funny and he fell into comedy by accident. “I had no other talents and I liked writing short stories. Somehow, I misunderstood the idea that these talents would translate so I had to learn the nuts and bolts.”

When Forrester was in high school, he was friends with the son of Susan Harris, the woman who created The Golden Girls. Forrester showed Harris a spec he wrote and asked for her advice.

“‘Silly is not funny’ was her first insight. And that was stunning to me because when I tried to write comedy, that’s how it came out. Zany, silly, crazy. All my attempts at comedy were heightened yuck fests.” But it’s the next piece of advice that really stayed with Forrester to this day.  “She said, ‘Write what is difficult for you – even painful. Trust that it will come out funny.’ It’s a crazy piece of advice, but so true. The crazy paradox about comedy writing is that the more seriously you approach it, the more likely you are to have it come out funny.”

Forrester calls that piece of wisdom: “the golden rule from The Golden Girls creator. To this day, whenever I get assigned to write a script, I say okay, given the parameters of the story I’ve been given, what from my own experience is difficult and painful that this story can explore. I really think the secret of why I’ve been able to continue to work in TV is that original rule.”

If it seems like pain and comedy are polar opposites, take a closer look.

The pain in the film There’s Something About Mary comes from Ben Stiller’s character losing the love of because of his own ineptitude.

In Little Miss Sunshine, Abigail Breslin plays a little girl who just doesn’t fit into what society expects little girls to be like. Her pain is increased when her grandfather, the only person in the world who understands her, dies unexpectedly. When Harry Met Sally is about the pain of having the love of your life right under your nose but not being able to recognize it.

In addition to Forrester’s golden rule, there’s another important lesson he leaned from working on The Office: how to create the right comedic tone.

“Broadly speaking, the thing that made The Office a hit was the tone of naturalism that was achieved in this show.  I came to learn that what tastemakers in comedy, like Ricky Gervais, Greg Daniels, Judd Apatow, respect most of all is tone that could be called naturalism.”

If you think back to the show, you may remember lots of pauses, deadpan deliveries and subtle humiliations. Forrester says this is also an acting style that is supported by naturalistic writing.

“You really feel – for significant periods of time – like you’re in a drama because it’s grounded and realistic. It’s not heightened in the way you see in multicam shows, especially bad multicam, where the behavior is exaggerated and unrealistic.

Think Three’s Company. I happen to love the show for nostalgic reasons, but anytime Chrissy overhears just a part of Jack’s conversation she makes drastic assumptions about the situation. That’s unrealistic behavior because in real life, she would just ask Jack what was going on. Writing naturalistically is not easy, however. “This is where it gets really tough for the writer, it takes a lot of discipline to write naturalistically. It’s not the instinct for comedy writers to be restrained. Then, when you go into mockumentary [like The Office], it tends to further emphasize this tone.”

While writing grounded comedy is a challenge, the rewards are huge. “If you don’t push into surrealism, coincidence in the writing and unnatural behavior, you create the context for a considerable investment and connection from the audience.”

He compares The Office to another Emmy-winning, NBC show, 30 Rock.

“30 Rock would indulge in a fair amount of surrealism and zaniness which causes the viewer to subconsciously disconnect emotionally from the characters and storytelling.”

Both shows were great in my mind, and watching each one is very different experience.

Here’s Forrester’s advice to budding comedy writers. “Write about stuff that’s important and serious to you. If you can share your own personal struggle, it always comes across on the page. The sense that there’s someone behind the script, trying to share the truth of their life is actually fairly rare and always exciting. If you can do that, you’ll eliminate a good share of your competition.”