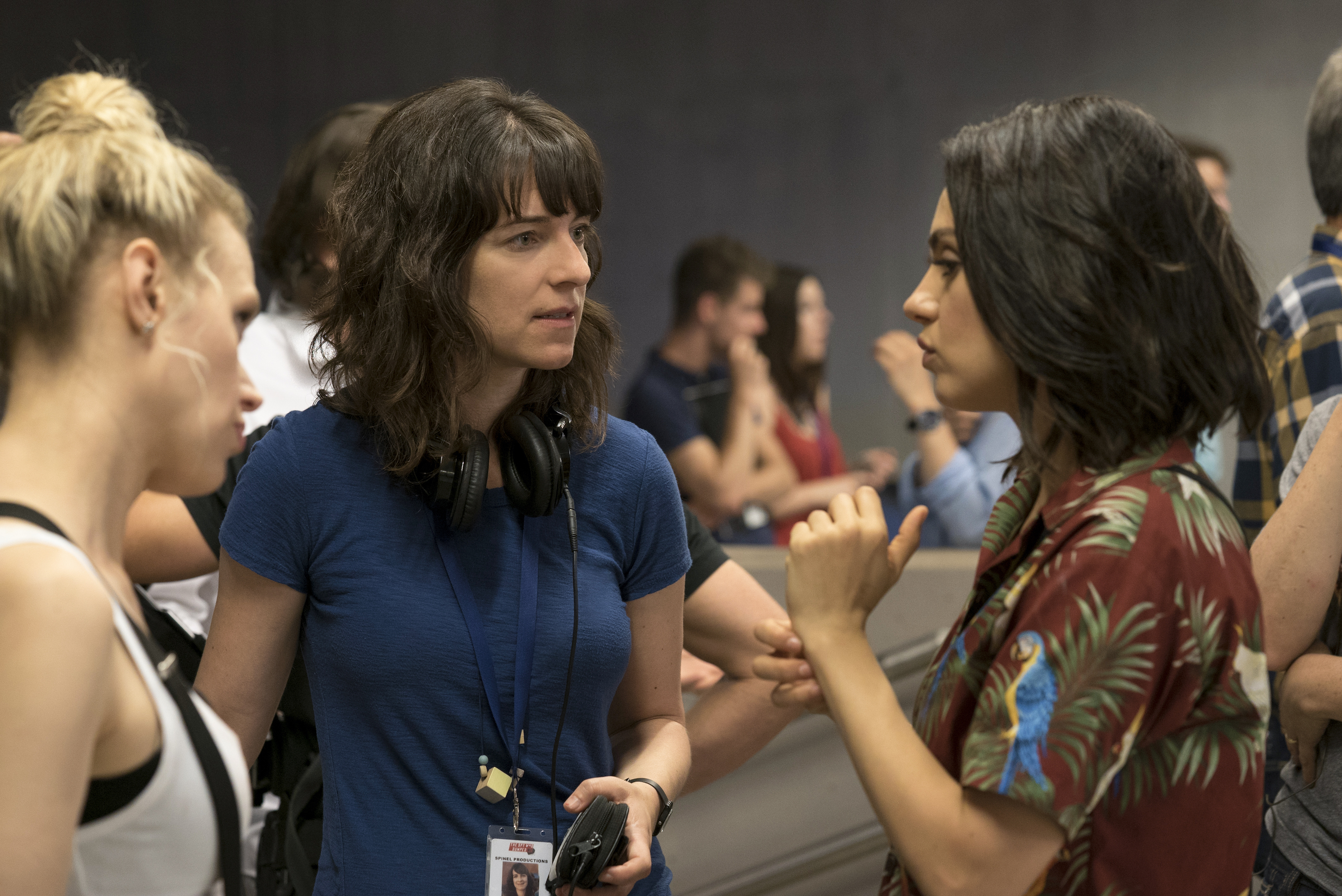 Writer/director Susanna Fogel talks to Mila Kunis on the set of The Spy Who Dumped Me. Photo courtesy: Imagine Entertainment

The Spy Who Dumped Me is an action/comedy film, one of the most difficult genres to get right. I sat down with writer/director Susanna Fogel to discuss the challenges of adding thrills and kills to the laughs.

There are so many funny moments in this movie and with stars Mila Kunis and Kate McKinnon, it seems almost impossible to screw it up. But action comedies are notoriously difficult because the action and humor require a delicate balance. Fogel agrees.

“It’s often a genre,” says Fogel, “that doesn’t succeed at making me laugh or making me feel excited by the action. My writing partner, David [Iserson] and I, grew up on action comedies like the Lethal Weapon-type movies so why don’t we like them anymore – whether male or female driven?”

Luckily, Fogel thinks she has a remedy to the problem. She says it’s important not to muddle the two genres. Instead, she says filmmakers need to commit to making the action exciting on the level and scale of a serious action film and not let silliness take over. Mila Kunis as “Aubrey” and Kate McKinnon as “Morgan” in The Spy Who Dumped Me. Photo courtesy: Imagine Entertainment

“If you raise the action to make it ‘funny action’ it starts to feel a little slapstick and that’s not really my taste. Sometimes you don’t believe there’s tension in the scene because people are joking or there’s pratfalls and it becomes too broad and that can be a problem. You have to let the action be action. In terms of the comedy, when it’s not grounded or it’s too joke oriented, it feels like it’s trying too hard to be funny. You feel that effort at the expense of seeing something that should be filled with excitement.”

The other thing that helped Fogel get the tone of the action right, was hiring Gary Powell, stunt coordinator for multiple James Bond films like Spectre and Skyfall.

In terms of structuring the screenplay, she starts by coming up with a handful of big moments that you’d want to see in the movie trailer. “When it comes to a very plot driven film like this, I do think about what are the five undeniable, visually interesting, cinematic scenes. That’s what we started with. We knew this is the beginning, this is the middle, this is the end. We don’t know any of the details, but what are some of the moments we know we want to have. You start with that, then you do smaller and smaller. Start more global – what are the five trailer moments. As cynical as that sounds, it does help you structure the movie and helps the urgency of the writing.”

When you’re making a comedy, many top comedic actors will go off-script and improvise. Some writers absolutely hate it, but really, it’s just par for the course. I asked Fogel what her experience was, especially since McKinnon is such a talented improviser.

“We did improve within parameters. A lot of times, someone like Kate who’s a brilliant improver will show up on set and do whatever she wants with the dialogue. But with a movie like this, there’s too much dialogue and too many other moving parts like plot and character that can’t be too unstructured. We had to figure out how to let Kate be Kate but not derail the scenes.”

Fogel says she hates to sound like a schoolteacher, but she thinks people, even creative geniuses like McKinnon, need limits and parameters. “Each day, we would circle moments in the scene and I would say to her, you can do whatever you want here. Every other moment, you have to do what I want. She ended up really leaning into that. The more comfortable she got with the character, the less she would improvise dialogue and instead improvise reactions. The more grounded she got with the character it became less about jokes.”

But sometimes, even the writer/director has to improvise. One big set piece in the film takes place in a giant gymnastics studio – but that wasn’t how the scene was written.

“The gym was a new addition because it was originally written as an ice rink. We were in Hungary location scouting and we couldn’t find the right ice rink but we could find gyms and we changed it.” It’s one of the funniest scenes in the film.

So the bottom line for writing a successful action/comedy according to Fogel, is to have real, fully-executed, non-slapstick action sequences with grounded characters and humor. I think that’s good advice.

The Spy Who Dumped Me opens August 3.