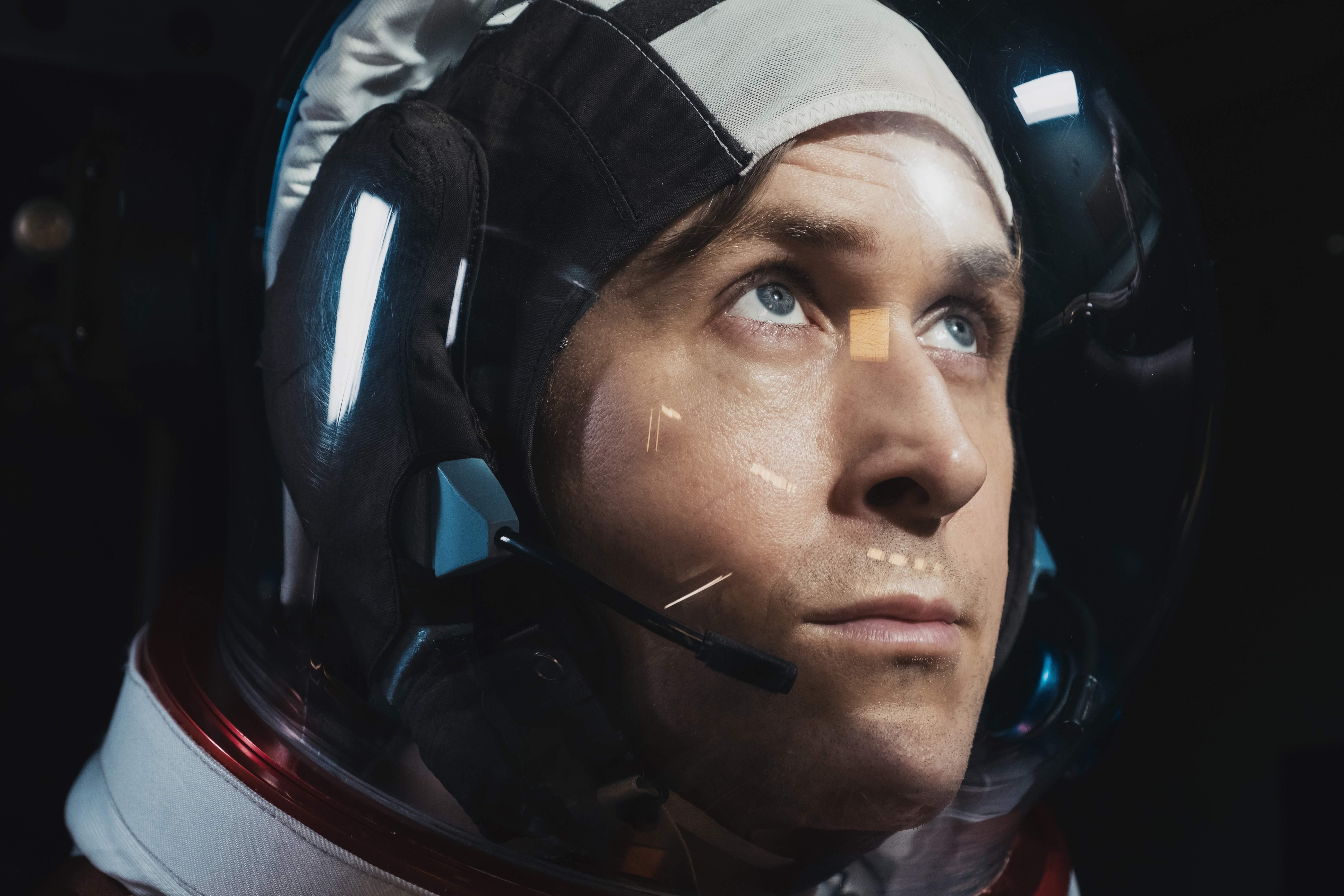 As storytellers, many of us frame our screenplays around The Hero’s Journey architecture, where the hero goes on a dangerous quest and returns forever changed. In many ways, the new film First Man, about astronaut Neil Armstrong, is the ultimate hero’s journey – he spends years sacrificing as he prepares to go to the moon, then, despite setbacks that are both scientific and personal, he makes the perilous journey to the moon – a huge victory for himself and for humanity – and returns home triumphant.

“One of the things that is somewhat challenging about movie – in a good way, I think – is it’s not a particularly traditional character arc,” says Singer. “But the reason I find it so powerful is because this man suffers so much – he endures it with such grace, and, at the end of the day, finds hope.” When the movie begins, Armstrong (Ryan Gosling) and his wife Janet (Claire Foy) have a two-year-old daughter who’s being treated for brain cancer.

‘Neil starts off in a pretty rough spot as he’s in the process of losing a daughter and sort of closes off.  As a way to find himself he throws himself into project Gemini and just as he starts to gain his footing again he loses his closest friend in the program.”

But there was more adversity to come.

“Two weeks later Neil has to go up on his own mission where he almost dies. So he goes to an even more closed off place than when we saw him at the beginning of the film. In some ways he has to close himself off in order to get to the moon.”

One of the most poignant scenes in the film takes place on the eve of Armstrong’s moon mission. Given the other tragedies that occurred in the space program, there’s a significant chance he won’t survive. By now, Neil and Janet Armstrong have two boys and it’s Janet who urges her stoic husband to prepare them for the worst.

“That scene, like most of the film, is based in fact. It was important for Janet that Neil have that conversation with the kids. The actual conversation is one we talked to his sons Rick and Mark about.”

In addition to getting pieces of the puzzle from Armstrong’s family (Neil died in 2012, Janet died in June of this year), Singer relied mostlyon two-time Pulitzer Prize nominee James R. Hansen’s book First Man: The Life of Neil A. Armstrong.“

But not all of Armstrong’s life is remembered or recorded. There was one key moment in the screenplay where Singer had to use conjecture.

Though it’s been well documented what other astronauts have left on the surface of the moon, US flags, golf balls, a family photograph, it’s not clear what, if anything, Armstrong left due to the mission’s manifest that was mysteriously lost by Armstrong himself. But it is known that Armstrong deviated from his scheduled activities while on the moon to take a personal moment. “All of his activities were planned out, but he took a jaunt to the Little West Crater and had a moment there. We wanted to play with that. It’s where Jim [Hansen, the biographer] thought he might have left something.”

Singer makes his best guess as to what a man like Armstrong, having suffered so much loss, might have left on the moon to endure the ages. We won’t spoil the object here; you’ll have to see the film to find out.

“We were always focused on the things you don’t know — that are unfamiliar about Neil. Much of what is in the film is not known to the wider populous which makes it more interesting to me.”

It’s the journalist or historian’s job to document the facts when it comes to a historical figure. But it’s the screenwriter’s job to enter into the person’s head, find what motivates them, determine their fears and what makes them tick. When you can successfully do that, a true story becomes art.

“This is what I love about movies like this,” says Singer. “Taking a piece of history that’s so well known, like The Boston Globeuncovering the Catholic church scandal and showing you what you don’t know at all. Seeing what you can learn from that.”

Probably the most exciting thing Singer learned from writing about Armstrong was his extraordinary leadership ability. “There’s a ton to learn about the intense sacrifice these guys were willing to make in order to achieve for their country and for humanity. To me, that’s inspiring. Also, the portrait in leadership. In this day in age, a lot of leadership is shown in words and hot air, frankly. To have Neil Armstrong, who doesn’t talk a lot, but is a clear leader through his actions — to me, that’s incredibly powerful and an interesting commentary on our time.”

Singer has this advice for screenwriters: “Don’t stop writing because your failures will lead to your successes. My first film was The Fifth Estateand I was devastated when it came out because it did terribly with the critics and terribly at the box office.  But that script got me the job writing this movie. It also helped get me the job writing Spotlight. Work begets work, you just have to keep writing.”