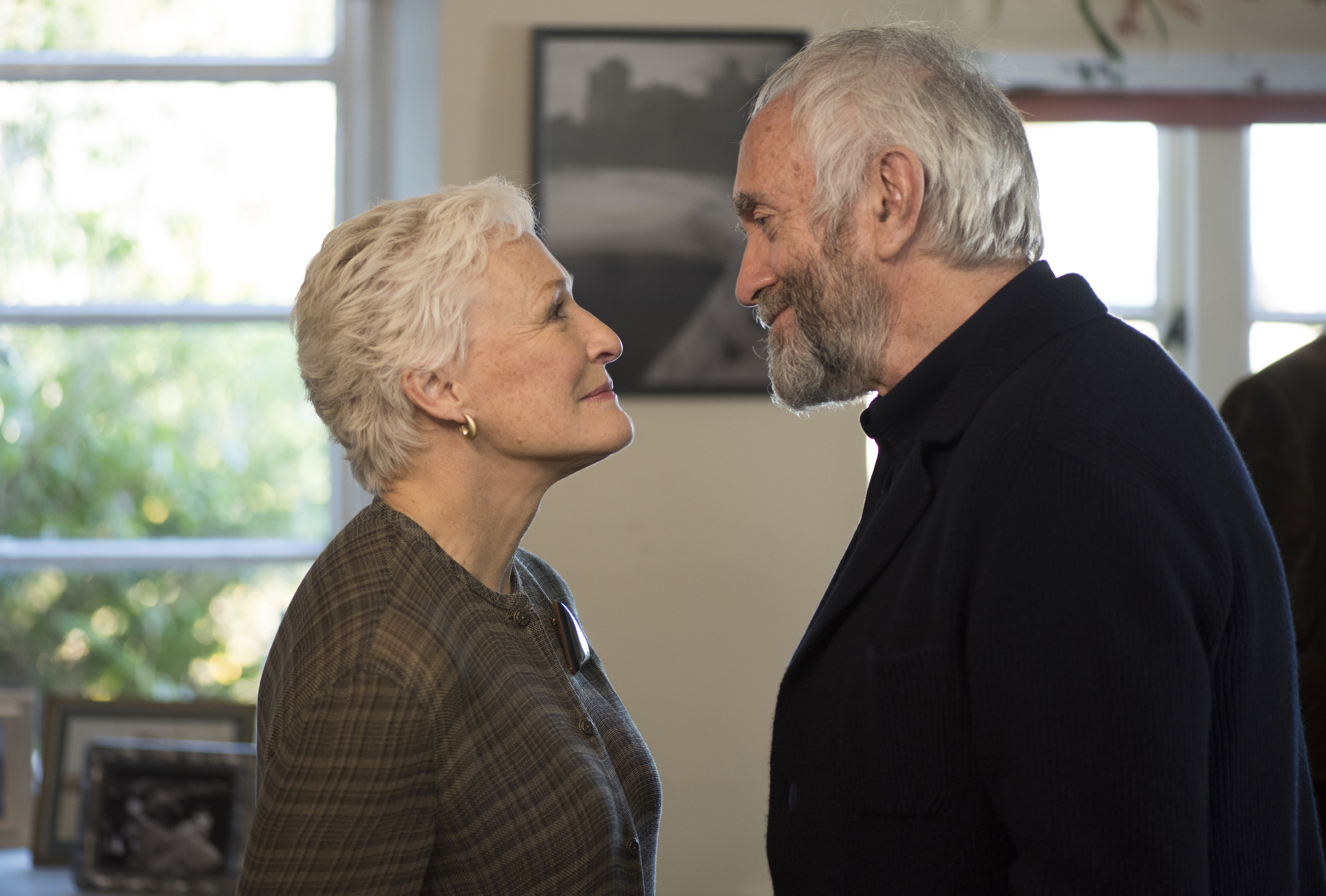 Even if you haven’t seen the film The Wife starring Glenn Close, you probably know that Close is cleaning up this awards season having won both the Golden Globe and SAG Award for Best Actress. She’s also nominated for her seventh Oscar for playing Joan Castleman, a wife who must face her life choices when her husband Joe (Jonathan Pryce) is set to receive the Nobel Prize for Literature. Soon, however, the question of who’s really the literary talent in the marriage begins to plague the long-married couple. Secrets, repressed emotions and anger all begin to bubble to the surface.

Based on the novel The Wife by Meg Wolitzer, the screenplay is written by Jane Anderson (Olive Kitteridge, for which she won an Emmy; Normal, How to Make an American Quilt). I had the opportunity to sit down with Anderson, Wolitzer and actress Annie Starke, who played Young Joan (and happens to be Close’s real life daughter), over lunch the day after Close won her SAG Award. Anderson says one of the major differences between the book and her screenplay, is the point at which we meet Joan on her journey.

“In Meg’s novel,” says Anderson, “it’s first-person pissed off woman. You know from the very beginning she’s going to leave this schmuck. But for film, Joan Castleman had to grow. She begins [the movie] pushing it all down. So that was a major adjustment.”

Anderson is referring to Joan’s arc. If Joan began the film already angry and ready to leave her husband, her character, along with the story, would have no where to go. Instead, we get to see the anger and resentment build. Close’s performance moves ever so subtly from dutiful, underappreciated wife to a woman full of power. It is this slow burn that Close wears on her face that is the reason why she’s collecting so many Best Actress awards.  She’s simply brilliant. What’s most surprising about this movie is that Anderson and Wolitzer claim it took 14 years to get made. The book was published in 2003 and Anderson wrote the screenplay in 2004. So what was the major hurdle?

“Back then,” says Anderson, “the men who ran the studios basically said to me, ‘We don’t want to do a film starring a woman and we’ll never get a male actor to play [her husband Joe].”

One agent even told her that if he gave the script to his male client, his client would never forgive him.

So Anderson and Wolitzer decided to try another path. They would approach filmmakers in Scandinavia and Europe who were possibly more accepting of the flawed characters in the story. And they found an actor known best for playing High Sparrow on Game of Thrones to play Joe Castleman.

“Jonathan Pryce, a wonderful actor and theater guy, saw this as a marvelous part and not a part second to a woman,” says Anderson. Not just a woman’s story

Perhaps it’s no coincidence the film was made just in time for the #MeToo culture that has emerged in Hollywood. But it’s also a time where female-driven movies are bringing in big box office. “We finally just happened to have gotten the movie made on the cusp of the Time’s Up movement. We finally hit the magical slot where pissed off women are the new black,” says Anderson.

But according to both the novelist and screenwriter, there was no feminist message or agenda in the book or film. The movie certainly wouldn’t have been effective if there was. Anderson explains it this way.

“Ultimately, this film isn’t about a woman who’s a victim, it’s about the compromises we make in a marriage. The most important key to the story – and Glenn’s character Joan – is when you see Annie [Starke] playing Young Joan. Realizing that she’s so deeply in love with this man she will say, ‘I will rewrite your work and call it yours if you’ll just stay with me.’ I think perhaps young women can relate to that. But what happens when you get older and the marriage settles? You start to realize it’s a compromise situation.” Anderson relates to the story

As all screenwriters know, writers are strangely underappreciated. “We spend six months crafting this thing and then the director is given all the credit. Of course the Writers Guild has been trying to fight that but it’s a common feeling we as screenwriters have. That’s why it was so easy for me to write this,” says Anderson.

Even if you’re not a woman or a screenwriter, anyone who’s ever felt they did an enormous amount of work and wasn’t recognized for it, can also relate to the film.

“The more specifically you write to your experience, the more compelling your story will be. But if you’re trying to stand back and write to an idea or a movement, it will be trash, it will be flat. Write to what moves you and craft it well. Tell a great story.”

The Wife is currently available on digital, Blu-ray and DVD.