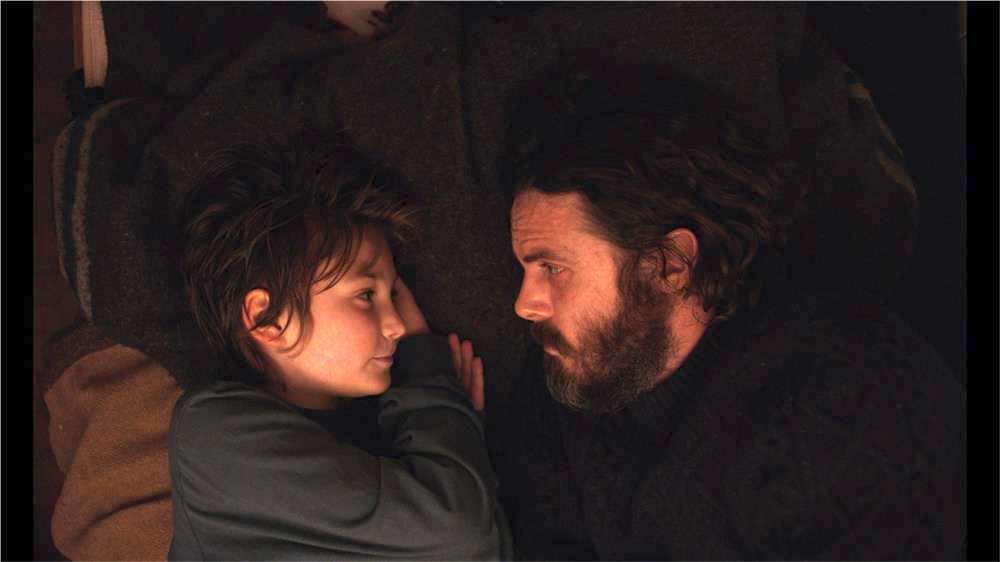 Anna Pniowsky and Ben Affleck in ‘Light of My Life’; photo courtesy of Saban Films

Light of My Life is both a tender and terrifying film about a father (Casey Affleck) and his daughter called Rag (Anna Pniowsky) that is set in a post-apocalyptic America where a mysterious plague has killed off nearly all women. Rag is now 11 and to keep her safe, her father dresses her as a boy. It’s a good idea for now, but soon may be impossible as she gets older.

Oscar-winner Casey Affleck wrote, directed and stars in this super intimate indie film that will have you on the edge of seat. I spoke with Affleck about his writing process and the advice he got from Kenneth Lonergan (Manchester by the Sea, You Can Count on Me) that helped him feel less intimidated when tackling his screenplay.

From the beginning of the interview, Affleck wanted to be clear he doesn’t think of himself as a screenwriter. “It’s not something I studied or planned on doing,” says Affleck. But a lifetime of working on movie sets inspired him to want to tell his own stories.

“I started writing down scenes that I thought were interesting – not always with the intention of writing a script that I would then sell or produce – simply as a way of memorializing moments I’d seen. Those moments became a collection of scenes that started to become a movie.” As a parent to two sons, Affleck says it felt natural to tell a parent-child story. “That’s what was happening in my life. But [Light of My Life] is also a house in the woods movie because I like those movies. It’s also a sort of a post-apocalyptic movie because I love those, too. It’s like a big stew – which is also the way I cook, I just open the cupboards and see what’s there, not go find a recipe on GOOP. I see what’s available to me and put it in the pot.”

Affleck says he took inspiration from movies like Witness, Children of Men, even Paper Moon. “That’s in there for sure, the long two-shots of a dad and his daughter arguing is straight out of Paper Moon. So, it’s a weird hodgepodge thing that I didn’t know what was going to be until I finished cooking it.”

One of the great things about this movie is there is very little exposition. The opening scene is a father and daughter inside a tent. They could be camping or they could be hiding out because it’s the end of the world, we simply don’t know… yet. The film lets you slowly discover the world and the frightening intensity of the situation. It’s a delicious slow burn.

Affleck says he trusts that the performances and behaviors of the actors will communicate everything the audience needs to know and doesn’t need to spell it all out in the dialogue. “We don’t have to put everything into words.”

That opening scene is 12 minutes with no cuts. Just a father telling his daughter a story. It feels so loose and natural, I was certain it was improvised. Affleck says it was entirely scripted and gives young actress Anna Pniowsky all the credit. “She is listening in a way that is completely believable. Small smiles, small reactions or non-reactions – she is not preparing her response to this story. She’s doing what is so hard for actors to do sometimes – just sit there, not do anything and listen to the other person.”

The story the father tells his daughter is a version of Noah’s Ark. He says choosing that particular story was a happy accident. “I wanted it to be about the species and survival, catastrophe, the environment – all that stuff that’s bigger, troubling – world issues. For thousands of years there have been so many myths and stories about a flood, whether it’s in the Bible or other places. [Light of My Life] is also about that – this big disease, survival, catastrophe.”

Affleck says the stories that are told generation after generation shape cultural and individual identity and give us clues about what is and isn’t heroic. Later in the film, Rag tells her dad her own version of the Noah’s Ark story, signifying a shift in her character.

“This movie is about a young person, creating and discovering her own identity. She’s able to filter the stories being told and take what matters to her and assert herself in a great way. In the Biblical story, she doesn’t identify with a passive character. She sort of flips that whole story on its head and says, ‘No, I’m this character and this character does something extraordinary.’ I love that because it’s someone who’s rejecting the old way and ushering in a new way.”

Most people starting their first screenplay can feel pretty intimidated, Affleck included. But he says the advice he got while working with Kenneth Lonergan as an actor, helped with writing the screenplay. Casey Affleck behind the scenes; photo courtesy of Saban Films

“Every time I would ask [Lonergan] for some help, he would say, ‘Just ask yourself what you would do. What would you say next? What would you do next?’ Maybe he’s keeping some secrets, but the simplicity of that and lack of artifice… Just have people talk the way they talk and behave the way they behave. It was a guiding light for me. It was a way of doing things that I could handle.”

Though Affleck isn’t sure he’ll write another screenplay, “Man, it’s hard. It’s a grind. It’s lonely!” He has this advice for writers:

“Write about what you love and don’t ever talk about it, something I’m tempted to do, but it takes all the energy out of it. Have it be separate because the energy will build up inside you and you’ll go and write it.”

Light of My Life will be in theaters, on Digital and On Demand Aug. 9.

Writer/director of 'The Kitchen' says go for that ‘bold, crazy idea’