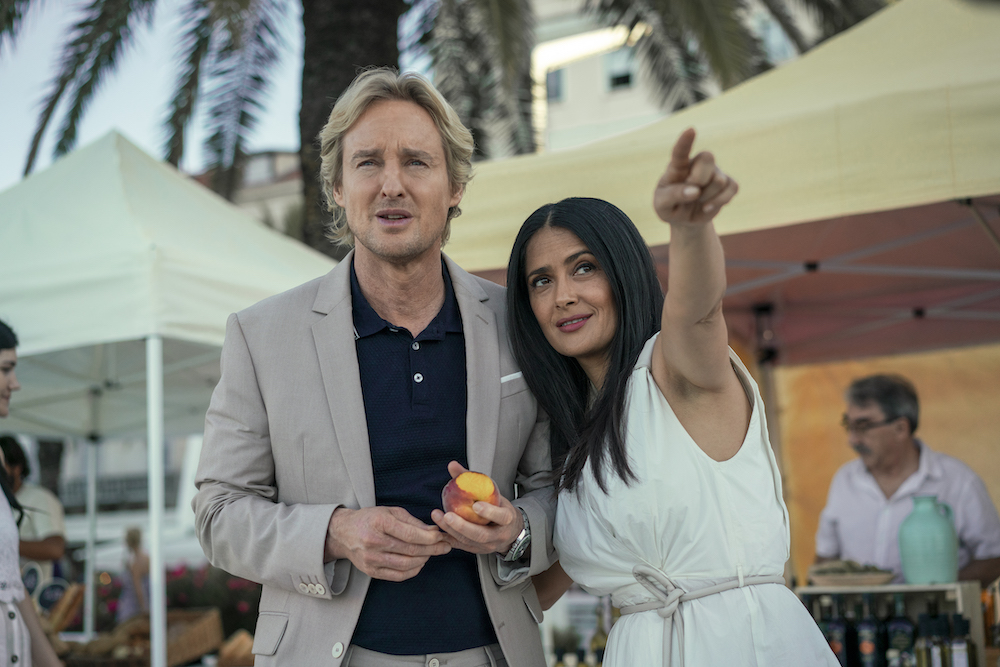 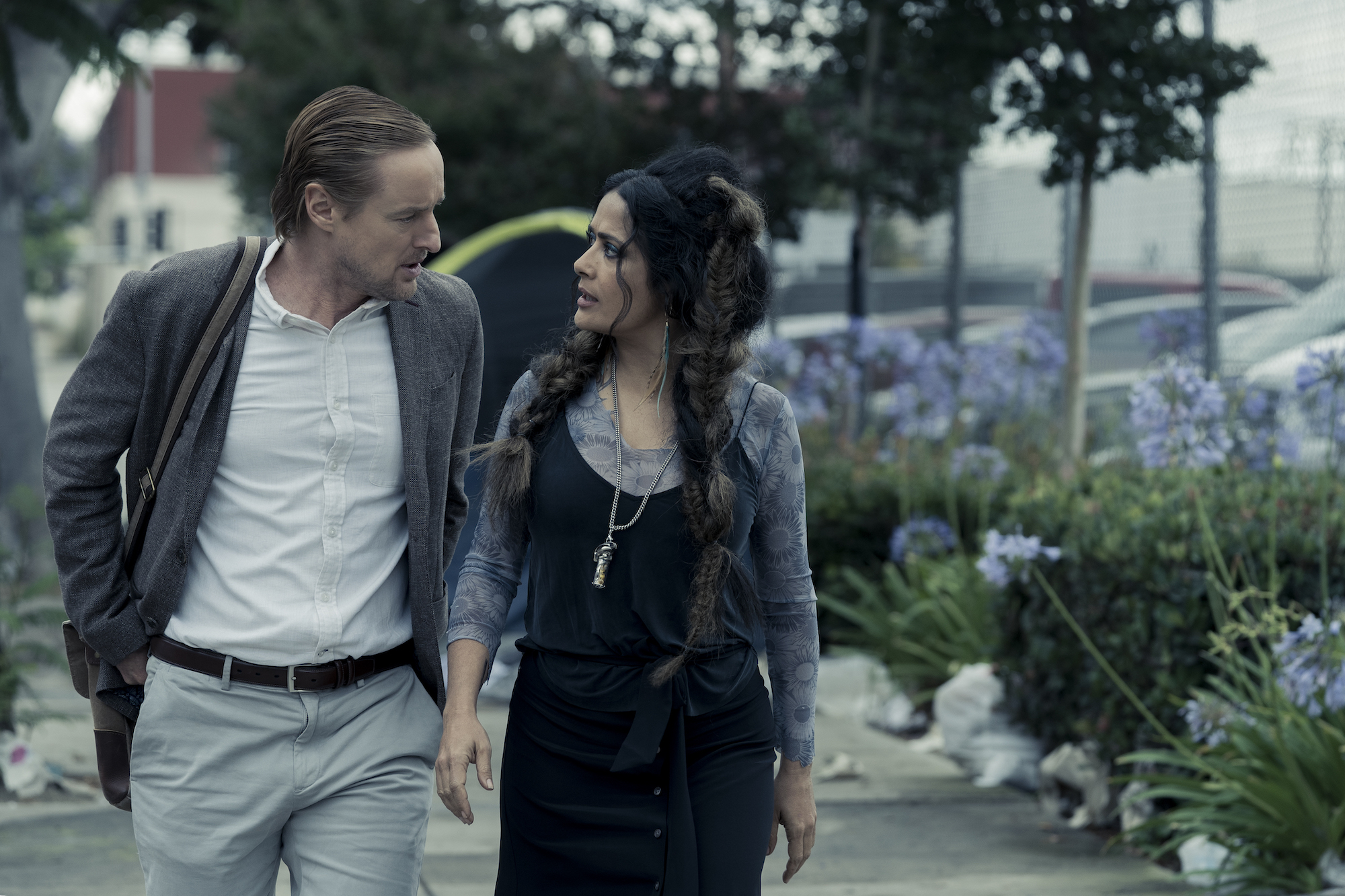 If you’ve seen any of writer/director Mike Cahill’s previous films (Another Earth, co-written by actress Brit Marling, 2011;  I Origins, 2014), you know he’s obsessed with exploring mind-tripping alternate realities by crashing science into spirituality. His latest film, Bliss, stars Owen Wilson as Greg, a man reeling from a recent divorce, who meets a mysterious, gypsy-like woman named Isabel, played exuberantly by Salma Hayek. Greg and Isabel find themselves moving back and forth between a seemingly beautiful, blissful reality and one that is dark and gritty, full of colorful crystals that, when snorted, upend everything around them.

Though the film was shot before the pandemic, it does often play out themes we’re seeing present in our divided country, where the lines between truth and fiction are often blurred. When I asked Cahill what inspired Bliss, he cited a philosopher’s idea from two millennia ago.

“I love The Matrix. I love The Wizard of Oz. I love The Truman Show. I love Jordan Peel’s Us. I love Shutter Island,” says Cahill over Zoom. “I realize all these stories are filmmakers doing a take on Plato’s Cave. I realize that story, from 380 BC, that one of the character’s references in Another Earth, it’s sort of an obsession of mine. And it’s an obsession of a lot of people – Inception, Interstellar. There’s so many films that utilize this archetypal story about a world inside of a world that proposes that the world you know are shadows on the proverbial cave wall. And then, through some mechanism, you are able to exit the cave.” 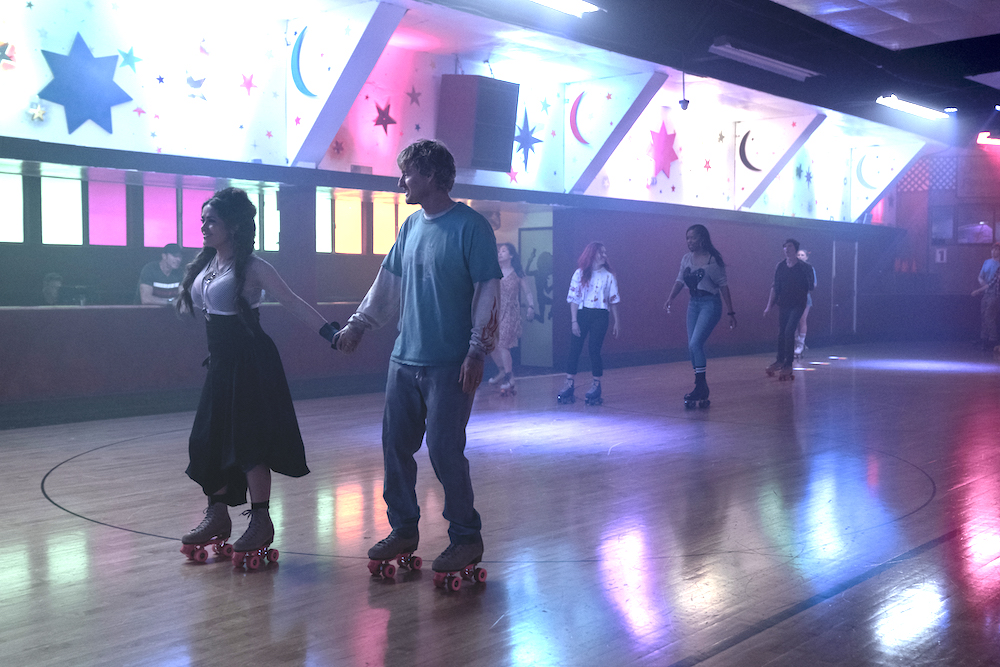 I wasn’t aware of the allegory of Plato’s cave, so after some Googling, I discovered it’s a story about some prisoners chained up inside a cave and can only see shadows moving on a wall. Because they have no knowledge of the objects or light casting the shadows, they believe the shadows themselves are real. It’s basically the idea that one’s reality is determined by the limitations of their personal experience (you can read a much more detailed summary here).

For Cahill, the cave allegory is an engaging way to explore taboo issues like homelessness, mental illness and addiction.

“These heavy ideas are hard for us to process in their raw, dramatic form. I wanted to look at them through the metaphor of science fiction and to say, ‘Imagine you’re in Plato’s Cave and there were these yellow crystals that allowed you to manipulate the shadows on the wall. Would that create less faith in the reality? What if there were blue crystals that allowed you to unlock the cuffs and you could go outside and see this beautiful, amazing world. Would you want to go back inside?’ So it’s using science fiction to explore escapism, numbness, running from reality. I’m using that in a fun way through metaphor.”

Cahill says the idea felt like a fresh take on an old story that people have been telling each other for centuries. “Even religions use the same story,” he says. “It’s the basic theological proposition that there’s a world outside of this world, a paradise. I love stories that overlap science and spirituality in a unique way. We’re trying to figure out what the world is, so we use science to interrogate the world.”

But Cahill points out that science can only explain so much. As humans, we look to stories to fill in the gaps. “Science deals with truth, it deals with fact, what you see under a microscope. Yet the human spirit requires narrative, which is a different thing. This time period of not knowing what is real or fake, or manipulated, it’s obviously very current, but it’s been around forever.”

A good example, he says, is a movie from way back in 1982: Blade Runner. “In that movie, memories are implanted, photographs are faked. At the end of the day, you don’t have a lot of choice, but you have a choice over what to believe in.”

Cahill says it makes perfect sense that we have a relationship with both the real and the unreal.

“We have just as an important relationship with the unreal, it makes us human. You’ve probably seen what’s been going on with the GameStop stocks. One of the things that occurs to me is that money is not actually a real thing, we just believe in it and that’s why it works!”

Somewhere between the real and unreal, he says, is where the film Bliss began to take shape.

When I ask Cahill what it’s like to release a film during a pandemic, his enthusiasm for exploring existential realities changes to concern. He seems genuinely worried for those who have lost loved ones.

“You realize that everyone is having different experiences. When you don’t have face time with the community, being with people you love in person, it’s challenging for the mind. A story about mental health is relevant because this [pandemic] is straining our mental health. Hopefully that resonates. The world is suffering and struggling. Any way we can connect is good.”