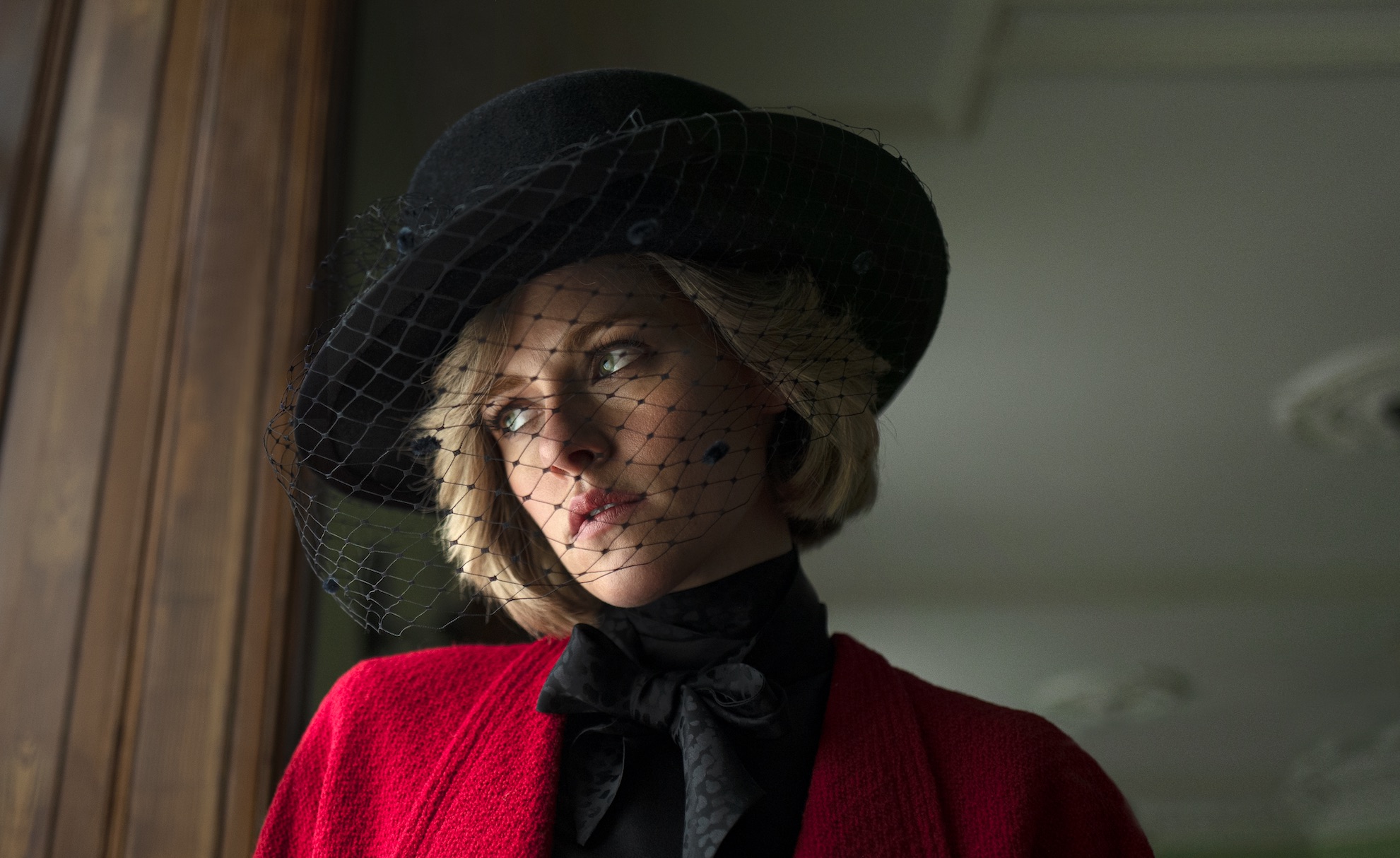 Spencer, the new biopic about Princess Diana, opens with Diana (Kristen Stewart) driving alone in a little green sports car along a rural road in the English countryside. She’s lost. So lost, she decides to stop in at a local fish and chips shop to ask for directions. Not only is the scene a fantastic metaphor for Diana’s troubled life and death, it sets the tone for a movie that is chock full of metaphors and conjecture. The screen reads, “A fable from a true tragedy” to make it clear that the tale we’re about to see is more fiction than fact.

The movie takes place over three fateful days at the royal residence of Sandringham House during Christmas in 1991, shortly before Diana and Prince Charles (Jack Farthing), decide to divorce. Screenwriter Steven Knight (Peaky Blinders, Dirty Pretty Things, Eastern Promises), had a very specific reason for wanting to focus on this tiny window in her life. I spoke with him over Zoom from his residence in England.

“What I wanted to do from the very outset,” says Knight, “was to take a snapshot, rather like a paparazzi photographer – you take a picture of a very specific and important period of time and concentrate everything into that. What you’re doing is a very intense analysis of who this actual person was as a human being, to get beyond the icon and get into the actual personality.”

As writers, we know that putting our characters in conflict helps to reveal their true nature so that’s exactly what Knight did with Diana: put her in conflict with the royal family over a holiday.

“It helps to put a person in a situation of pressure. It’s relatable to the rest of us being at a family occasion with members of the family you don’t particularly want to be with. I think we’ve all been there! I wanted to put her in a very relatable situation at a time when an important decision was made and that process gives us the real Diana,” says Knight.

That decision, of course, was whether or not Diana would remain married to Charles. A decision that would seal her fate. 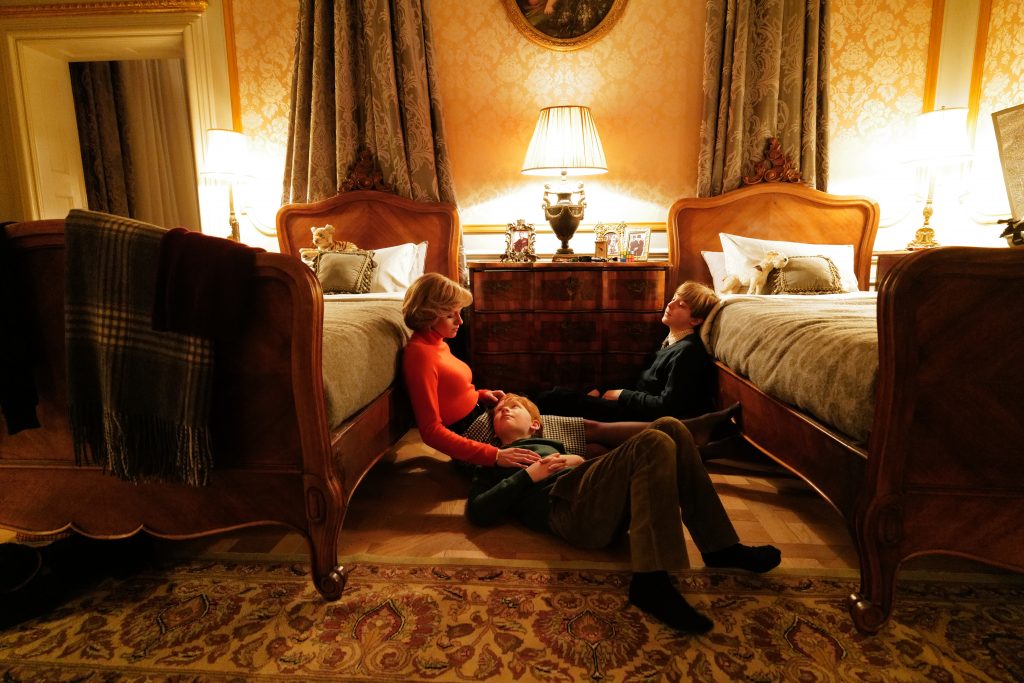 To research what may have taken place during that Christmas holiday, Knight spoke to some royal staff members who were actually working at Sandringham House on condition of anonymity. Some of the most preposterous things in the film were actually real!

“Reality is always more bizarre and outrageous than anything that you could make up as fiction. There were true elements that were truly gifts to a writer. For example the weighing machine. No one would dare make that up! And here’s Diana, with the condition that she had, and she’s weighed in and weighed out. The things that seem most unbelievable were mostly true,” says Knight.

In the movie, Diana is asked to weigh herself upon arrival to Sandringham House. This is a real tradition started by King Edward VII, where all the guests are weighed at the beginning of the holiday and at the end. Weight gain was seen as proof that a good time was had. But when you force this tradition onto someone with an eating disorder, it turns into a nightmare.

Knight refers to the film as a fable, but it starts to delve into the horror realm, taking on dark, nightmarish tones in one particular dinner scene with the royal family. As Diana and the others eat pea soup, she’s wearing a pearl necklace given to her by her husband. The problem is that she’s discovered Charles gave his mistress, Camilla Parker Bowles, the same exact necklace. During the fantasy scene, Diana rips off her pearls, causing them to fall into her soup. She proceeds to chomp on them with a horrific crunch. I asked Knight about his intensions with the scene.

“That scene is fable. Because she’s not well, it gives us permission – when we see the world through her eyes – to see things metaphorically, allegorically. I think every member of that family is obliged to absorb, to take things in, to just do it – they have to do it, it’s their duty to do these particular things on certain days every single year.”

Knight added that for Diana, the very act of swallowing food was something she would rebel against by later vomiting it up.

“It’s almost like that [act of regurgitation] represents something about her personality as well: she absorbs it, but she can’t keep it. I wanted to express that visually and I quite liked the idea of the white pearls in the green soup. Pablo [Larraín, the director] is an absolute master at turning that into something special,” says Knight. 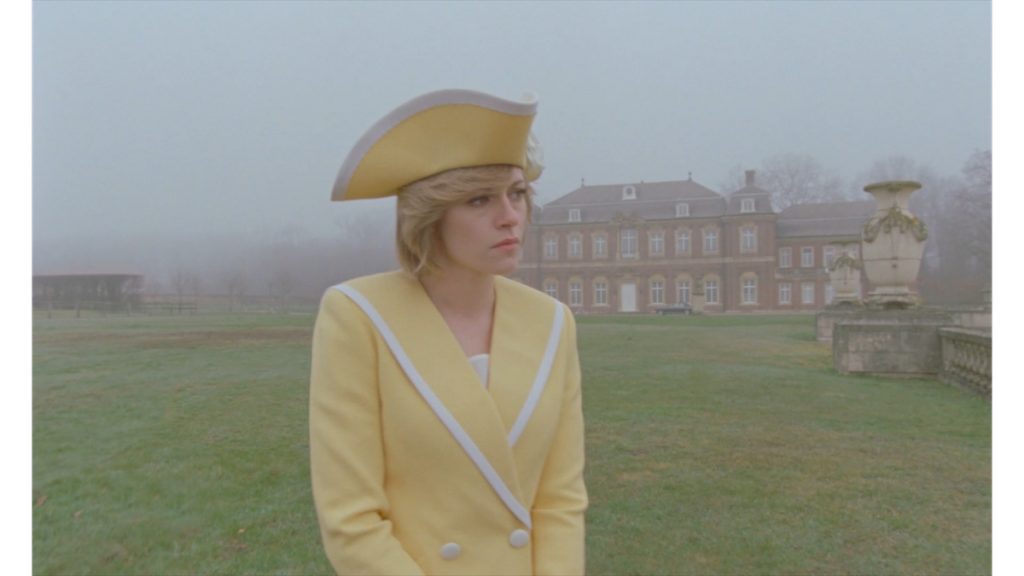 Knight uses scenes like these as a way to get into the mind of his protagonist. Through research, he says he gathered as many facts about the weekend as possible and used them as a framework to support the scenes that are more fantasy.

“As a writer, what you get are these steppingstones that you can then dance through. They are the things that nail the whole thing down and then you can weave your fable around that. The task at hand was to take what you know, what you’re told about the situation and who she was and what she did during that period, and then just leap. You leap from one thing you know to be real and leap to the next thing, but in between you have to see these events through her point of view. She sees the ghost – we’re not saying the ghost is real, but she sees it. We are inside her head and experiencing her traumatic situation through her. I really wanted it to be a fairytale – most fairytales are horror stories with a happy ending,” says Knight.

The ghost Diana sees in the film is the spirit of Anne Boleyn (Amy Manson). In real life, King Henry VIII, had Boleyn beheaded. The ghost is another great visual metaphor to help us understand the dark side of royal life.

When I ask Knight for his advice for writing a biopic, he sites a quote from Leonard Cohen. “All you need to be a writer is arrogance and inexperience,” Knight says with a laugh. “In other words, just do what you think is right. Don’t be afraid to go off on a mad tangent. Also, if you’re writing about a human being who existed, try to imagine yourself in their shoes, try to imagine yourself as them. How would you react? What would you do in this situation? I’ve looked at newsreel footage of Diana and sometimes she looks as if she’s going to burst out laughing, and you think, ‘I’d do that in that situation!’ There was something very accessible about her and that is part of why she was so popular.”

With Kristen Stewart’s powerhouse performance, the film should be quite popular, too – especially around awards season.

Spencer is currently playing in theaters.