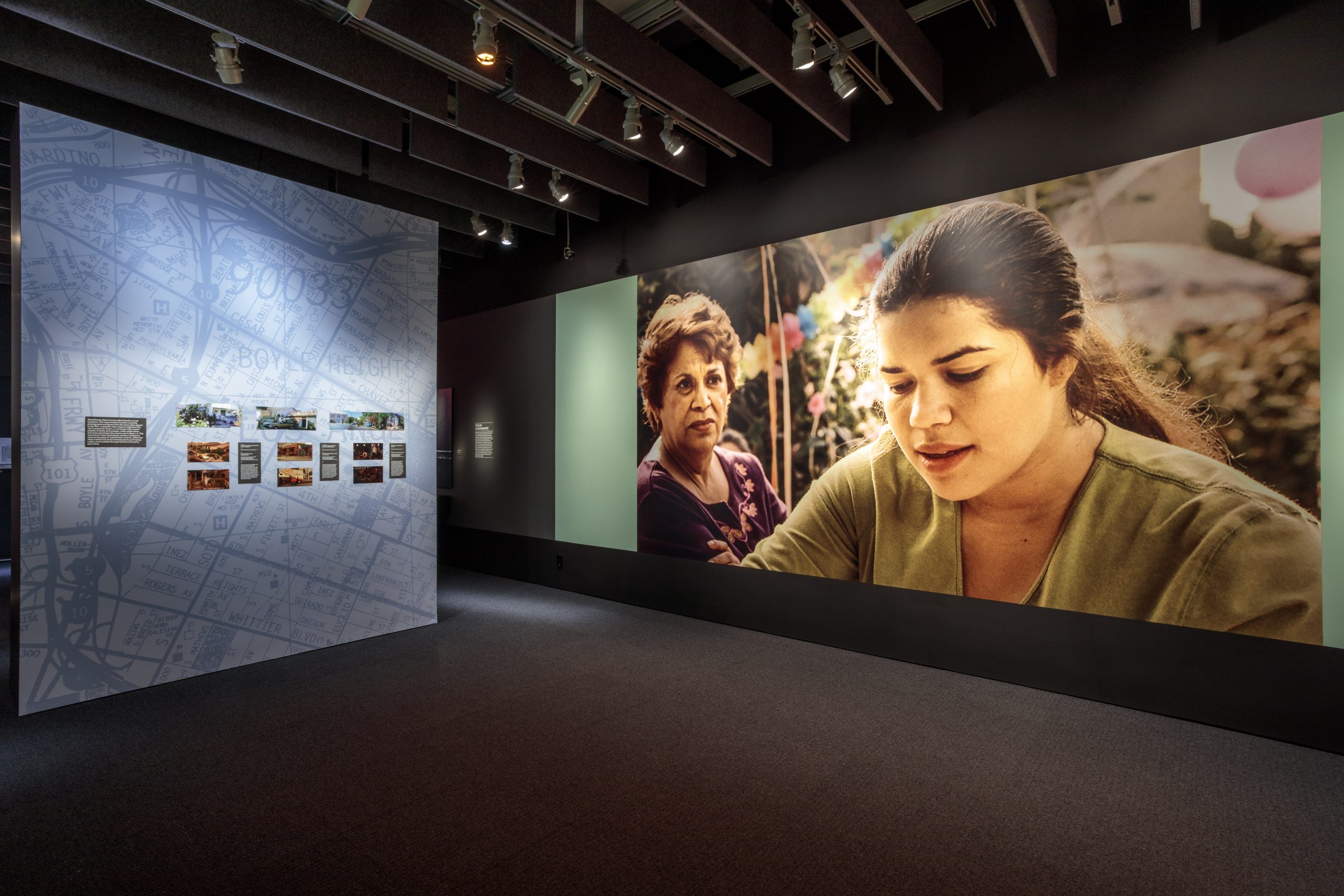 The recently opened Academy Museum for Motion Pictures reworks the old May Co. building at the corner of Fairfax and Wilshire in Los Angeles, transforming the four-story space into a film-lover’s paradise. It has gorgeous theatres and carefully curated exhibition halls, where nearly all aspects of filmmaking is paid tribute. The ongoing “Stories of Cinema” exhibit is like walking through three floors of your favorite movie worlds while getting schooled in film history. Some the movies featured here are Singin’ in the Rain (1952), Lawrence of Arabia (1962), Blade Runner (1982), Fast Times at Ridgemont Hight (1982), Training Day (2001), Up (2009) and Crazy Rich Asians (2018).

But the film that brought me to the museum was Real Women Have Curves (2002). Not only is the film included in the “Stories of Cinema” exhibit, it was also being screened in the David Geffen Theatre on Oct. 17,  followed by a Q&A with Josefina Lopez, who wrote the play on which the film is based, and co-wrote the screenplay with George LaVoo. Two decades later, the film is uplifting, funny and emotionally charged as it deals with themes of the immigrant experience and a young woman coming of age and learning to love her body. America Ferrera’s performance as Ana dances the line between heartbreaking and joyful. But Ferrera’s powerful performance couldn’t exist without Lupe Ontiveros’ controlling, manipulative Carmen, Ana’s mother. The two characters are explosive when they combine.

The conversation was moderated by the museum’s assistant curator, Sophia Serrano, who asked Josefina Lopez about the origins of Real Women Have Curves and why she started writing. 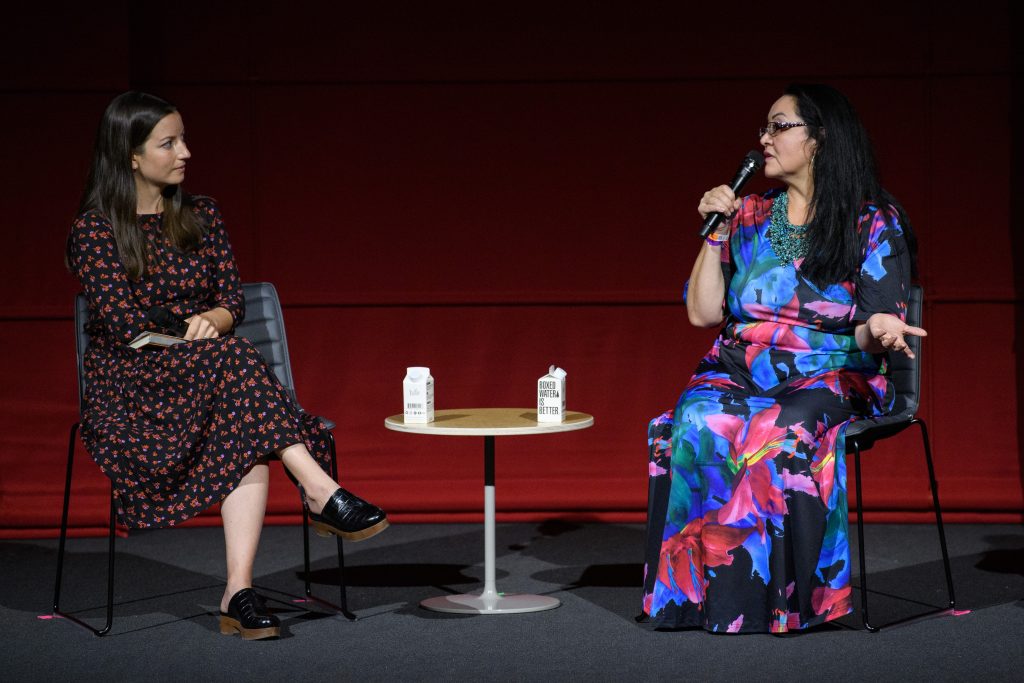 As a child, Lopez had a flair for the dramatic and wanted desperately to be an actress. She recalled a day when she was a senior at the Los Angeles County High School for the Arts that had a lot of impact on her future. She was rehearsing A Chorus Line but was wearing shorts instead of the required leotard the other female students were wearing. When the theater teacher asked why, Lopez said she was embarrassed because she wasn’t skinny like the other girls. Then the teacher laid down some tough words. She told Lopez that if she truly wanted to succeed as an actress, and she believed Lopez could play a wide range of roles from Juliet to Lady MacBeth, she’d need to lose weight.

“When she told me this,” said Lopez, “I knew she was telling me the truth, but I just started crying.”

Lopez couldn’t reconcile the path to becoming an actress with holding true to her identity.

And that’s when she decided to be a writer. Finding her voice through writing would help her foster the change she wanted to see in society.

“If fat girls aren’t getting laid, in my story they will!” said Lopez, adding, “In my story, they get to be heroines. I realized that a fat girl doesn’t fall into the paradigm of a male story because men want to be heroes.”

She knew she needed to tell her own story because as a young undocumented person, she felt invisible. “Once I got my Green Card, I said I’m never going to be a shadow again,” said Lopez. For her, writing has been the way for her to fight for her humanity.

The play Real Women Have Curves got immediate attention. She was just 21 when it got produced. Warner Bros. called her in 1990 but it wasn’t until 1998 when George LaVoo saw the play and they began collaborating on a screenplay. She came up against all kinds of obstacles like the studio wanting to cast white actresses as Latinas and at the time, a size 6 was considered overweight.

LaVoo continued to shop the script around and eventually, after an 11-year journey, HBO said yes to the film. Lopez believes it never would have been greenlit if there wasn’t a woman in a position of power. “Without women like Maud Nadler and producer Effie Brown, the movie wouldn’t have been made. It took a woman to say, ‘Our stories matter, our stories are important,’” said Lopez. 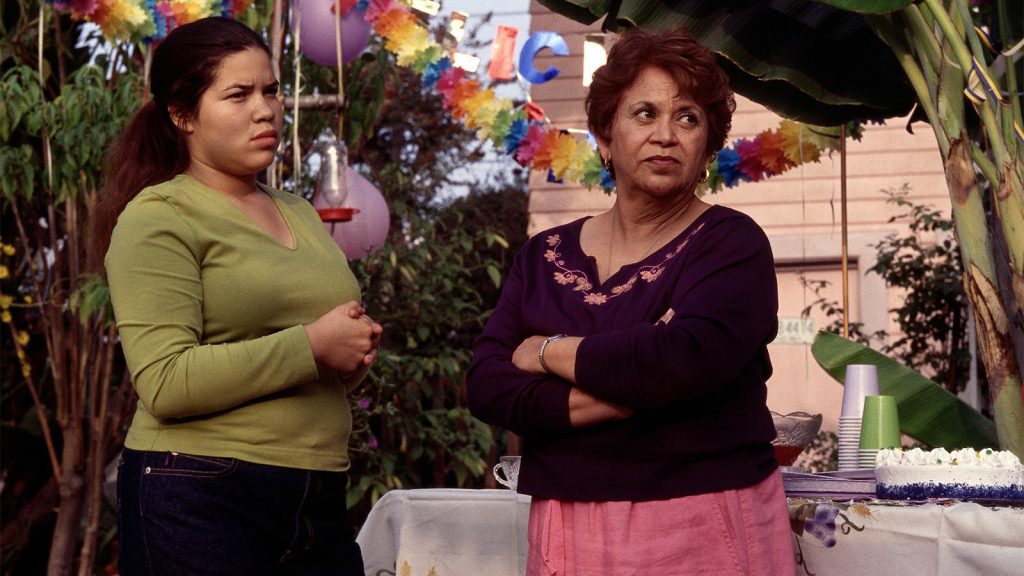 From the beginning, Lopez knew she wanted Emmy-nominated actress Lupe Ontiveros to play Carmen, the mother character. “No one was going to play Carmen but Lupe because she scares me like my mom!” said Lopez. Lopez really wanted to give her this meaty role considering Ontiveros played a maid 200 times in her career.

But the producer said they didn’t think they should cast Lupe in the film because of her role in in the movie Selina as Selina’s killer. People were confusing the actress with the real killer, thinking they were the same person. “It was so unfair that Lupe was such a great actress that people actually believed she killed Selina! She was treated as if she was Yolanda Saldívar,” said Lopez.

It’s always strange when life imitates art, but Lopez persisted and she won out in the end. Lopez also shared that she felt like Ontiveros was her spiritual mother. Ontiveros died in 2012 and the Latino community is still upset that the Academy forgot to include Ontiveros in the “In Memoriam” section of the Academy Awards. Now, a giant image of Ontiveros is featured in the museum.

Lupe Ontiveros and America Ferrera in the famous ‘Don’t eat the flan!’ scene from ‘Real Women Have Curves.’ Photo courtesy of HBO.

An audience member at the Q&A asked Lopez about balancing the drama with humor and wit. Lopez explained that when you use humor, it allows you to tell the truth in a way that people can accept it. “You can focus on how tragic it is to be an immigrant, to be poor, to be a disenfranchised or oppressed person and everyone writes that story. But if you find a way to take something that’s very tragic and make it funny, that’s when you get people’s attention. Instead of showing Latinos as victims, you show the resiliency, you see what fighters they are and to me, so much about having dignity is about having a sense of humor.”

Lopez said she has a really strong “bullshit detector” that helps her find the humor in any type of situation. “I’m able to disempower any oppressive force because I quickly call bullshit and you find the ridiculousness. Humor is a weapon. For me, anytime someone throws shit at me, I’m going to do this ninja move and throw it back at you.”

A lesson in resilience

Being a writer comes with a lot of exciting opportunities – but also a lot of rejection and frustration. Lopez brought up the film Lady Bird that was widely praised by critics and nominated for five Oscars, pointing out how the last few sequences in the film were strikingly similar to Real Women, only they told the story of a thin, white girl.

“How come this story gets celebrated? And Real Women didn’t get any [Oscar] nominations? How come there weren’t enough Academy members who went to see the movie? Lupe and America should have been nominated for Oscars, why didn’t it do more?” said Lopez.

Fortunately, Lopez said she draws strength from her father’s resilience. It’s his experiences that have helped Lopez sustain her 30-year career. “My father got deported four times and almost died crossing the border. I asked my father why he didn’t give up when he almost died. He said, ‘Because I knew that your mother was depending on me and I couldn’t let my children down. I had to keep on going. Every time they deported me, I was like a cat. They threw me, I would turn around, land on my feet and go for it again.’ When he told me that, I thought here I am complaining, ‘Oh, this is so hard. So much rejection!’ But I realize that my father got deported four times so that I could get rejected a thousand times and still be here to tell my story.” 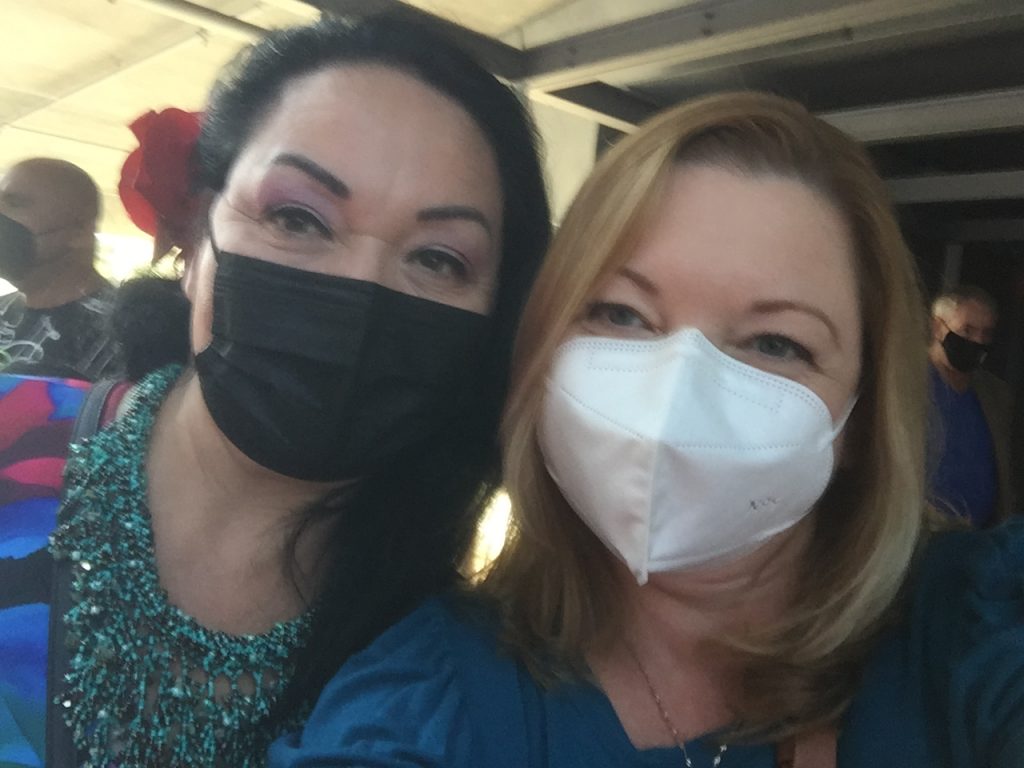 Josefina Lopez and journalist Shanee Edwards at the Museum of Motion Pictures.