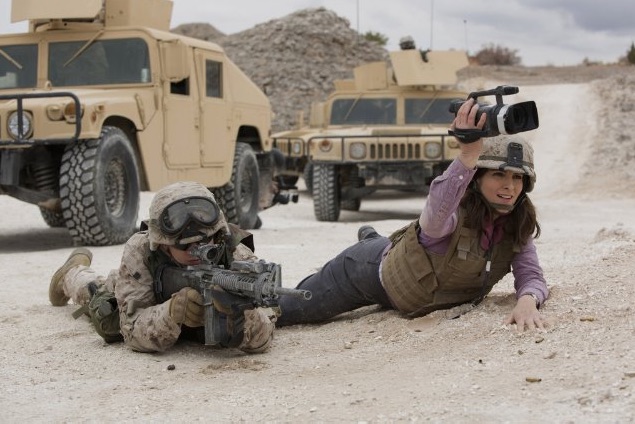 Writer Robert Carlock has a long list of TV shows that don his name. They include Unbreakable Kimmy Schmidt, Saturday Night Live, 30 Rock, Joey, Friends and The Dana Carvey Show. But his new film, Whiskey Foxtrot Tango starring Tina Fey, is his first produced feature. It’s the story of a naive journalist who takes an assignment in Afghanistan.

So, how did he get a gig on the feature side of writing with Tina Fey? “I was in her line of sight,” he says modestly. Carlock shared showrunner credits with Fey on 30 Rock. He jumped at the chance, but soon started to understand just how different the process of television writing is compared to film.

“There really isn’t a ‘room,’ so I was lucky to have people like Tina and the directors John and Glenn giving notes…” says Carlock. The work is very different. In features, the writer typically works alone with occasional notes from other parties; whereas, in a writer’s room, the writer is surrounded by other fellow writers pitching out jokes and amending storylines all day long.

Writing features is also different in the way Carlock structures the character’s emotional arc, he says. “You’re trying to tell a story from A to Z, as opposed to looking at a whole season or seven movies worth of material in a season… It’s a very different thing.”

Carlock sat down with ScreenwritingU Magazine to talk about being on set in New Mexico and balancing the tone of comedy and war reporting.

No Replies to "WHISKEY TANGO FOXTROT by screenwriter Robert Carlock"