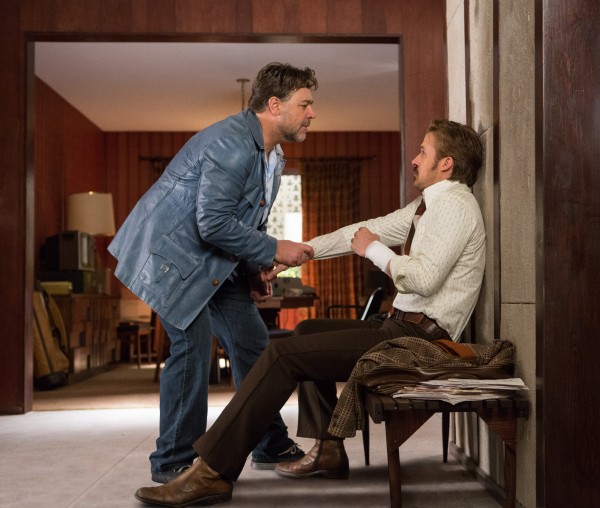 Writer/director Shane Black, with the help of fellow writer, Anthony Bargarozzi, is back doing what he does best – writing a buddy-cop flick that will push the envelope, exceed expectations, and oh yeah, make you laugh.

There’s a reason screenwriters often refer to the first five pages of their scripts as the “hook scene.” It’s an old adage that if you wow your audience in the beginning, they’ll stick with you throughout the movie. Buddy-cop and crime films are famous for opening with a bang, and The Nice Guys delivers on all fronts. Black and Bargarozzi find an interesting way to set up the story’s plot. A woman dies in a tragic car crash. It’s not the fact that she dies that’s intriguing, it’s how the scene unfolds. Think about your story. Do you have the best opening scene? How can you begin with something so startling your audience has to stay put in order to see the story’s outcome?

The most successful buddy-cop movies are ones that feature two cops that absolutely, under no circumstances, should be together. The characters should mix like oil and water in order to create the most dramatic tension. One cop is typically a loner, in this case, it’s Healy (Russell Crowe), who doesn’t play nice with others. He’s the “lone wolf” who makes rash decisions, takes risks and struggles to maintain even the simplest of relationships.

The other cop is usually a family man like March (Ryan Gosling), with a lot at stake if he is injured or worse. The twist the writers Black and Bargarozzi put on March is that March’s family has been fractured after the death of his wife. Now, March must raise his 12-year-old daughter, Holly (Angourie Rice), on his own, but the truth is, this woman-child seems to be raising him. Because the film is set in the 1970s, we don’t mind that March’s tween daughter is driving him around because he’s drunk all the time, but it would be a lot harder to pull off a protagonist with such atrocious parenting skills in a film set in modern day. Find interesting ways to set your characters apart from each other and the naturally buddy dynamic will start to take shape. You may have heard of the meet-cute (that’s when two love interests in a romantic comedy have their first scene together and it usually involves dropping a bunch of papers or some other extremely cute moment), but have you heard of the meet-violent? It’s a long-used buddy cop technique.

When the two cops meet for the first time, the scene must be violent to set the tone for the rest of the film. In The Nice Guys, Healy is paid to put the hurt on March. Healy enters March’s home and breaks March’s arm. The writers do an excellent job of making the moment grotesque and funny, letting the audience know they are in for a lot more of the same. When writing your own meet-violent, what can you do to set the characters against each other and give their meeting lots of bang for the buck?

No. 4 — The suffering woman

Usually in buddy cop movies, the family guy, in this case March, is married to the classic “put-upon” wife who loves her husband but can’t understand why he’s risking his life and ignoring his family for a job he hates. The writers made a marvelous tweak to this archetype by making her March’s daughter, Holly, since his wife is dead. An innocent, Holly loves her father to the point that she’s willing to lend her sharp, sober mind to help solve the main crime. This woman-child character adds tension in the story when her life is in danger, and additionally, it is her strong sense of morality that also helps March locate his own inner sense of justice. When crafting your own buddy cop flick, remember to use the elements that make the genre work but put your own personal twist on these for a fresh take. At some point, the cop buddies must realize they are in over their heads with the crime they are trying to solve. If the crime were easy to unravel, we’d be watching it on TV. As March and Healy continue to investigate the disappearance of Amelia (Margaret Qualley), they discover her mother Judith (Kim Basinger), is the head of the California Department of Justice. Suddenly, the movie goes from the simple case of a missing girl, to a corrupt government pulling the strings behind a huge buy off involving three major automakers. This is called raising the stakes, and here they do it well.

Though the story of The Nice Guys is a bit difficult to follow at times, the film is fresh and laugh-out-loud funny, as it explores the seedy, pulpy world of a sunny-noir reality that wasn’t so long ago. It’s a world that both keeps to the tropes of the buddy-cop genre functioning while hilariously twisting and reinventing them. The ending left room for a sequel and we hope the box office returns are big enough to warrant it.

What’s your take on how to write the best buddy movie? Will you use the techniques above or do you have another tip for how to get it done?

1 Reply to "The Nice Guys: 5 tips for writing a buddy-cop movie"