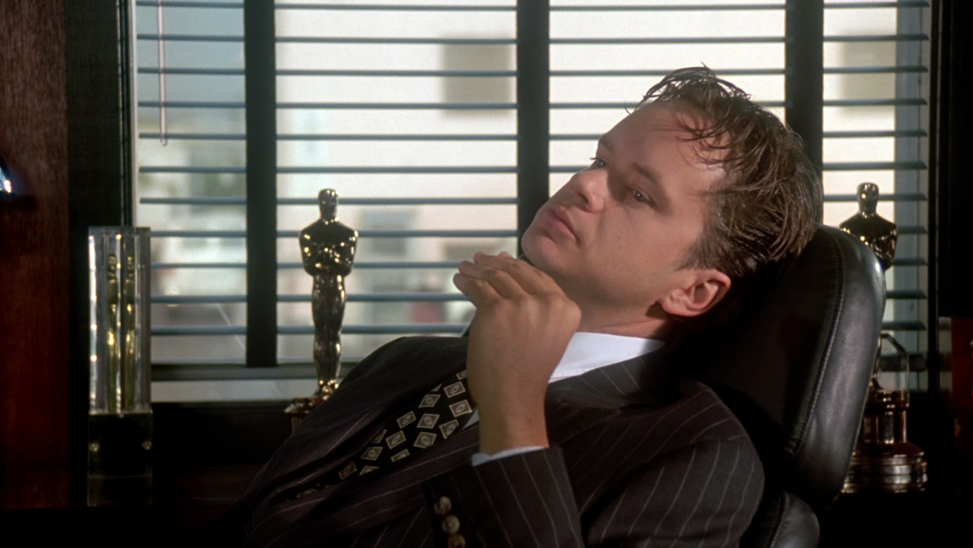 Sometimes it’s not good to cross a screenwriter. The Player (1992) photo courtesy of Fine Line Features.

5 Rules for Writers With Attachments: To Free or Not to Free…?

Okay, so we’ll start with the bad news: the math. There are roughly fifty thousand scripts registered at the WGA each year. Not everyone registers their script though so this number is on the low side. Spec scripts go in and out of fashion, but each year the studios buy around fifty. That’s a very small percentage of the number of scripts written. Sounds depressing, and for most writers it probably is.

However, there are things you can do to increase your odds. First, educate yourself. At least forty-five thousand of those scripts are written by people who think writing a movie is only marginally more difficult than watching one. Educating yourself puts you in the top ten right away. After that, there are all sorts of things to try: contests, finding a manager, working in the industry in another capacity, networking your butt off, or… finding an attachment.

Years ago, producers paid to option scripts. That was back in the days when studios handed out housekeeping deals like candy on Halloween. When the studio money dried up, so did the options. In order to stay in business, producers began to ask writers to accept entrée to the studios and the best agencies in lieu of paying options. Now, if it stops there, it’s not really a bad deal. But it seldom does…

Very often in exchange for their contacts, a producer will ask for changes to your script. Suddenly, you’re re-writing your script for free. And, if they bring on a director or an actor you’re doing it again. This can go very well…or it can go badly. Should you do it? Maybe. Here are five rules to help you decide.

I had a script that was a semi-finalist in the Nicholl. When something like that happens you get a ton of emails from producers. Some of them are actually producers and many of them want to be producers. You have to figure who’s who. Get a solid bio from the producer and then check it out. Google. Ask for the names of other writers they’ve worked with. Make phone calls.

If all a producer can offer you is the ability to get your script to the studios, make sure he or she can actually do that. A good way to gauge his or her ability is to go on IMDB.com and see if this person has had a film produced in the past 18-36 months. If they have, chances are they still have those contacts and can make the calls. If the producer has credits, even a big production, but hasn’t released anything in a while, like in the last five or ten years, chances are many of his or her contacts could have moved on or gotten out of the business. That means, he or she might have a tougher time getting your script around Hollywood.

You might be asking why would someone attach themselves to your script if they don’t have the right contacts to get it made? Well, sometimes a really good script can get them in the door. A good script will set them up so they can submit other scripts. The thing is, you want them opening doors for you, not vice versa. Some producers are more difficult than others. Swimming With Sharks (1994) photo courtesy of Trimark Pictures

Occasionally, a new producer, director or even an actor is so impressive that you may want to go with him or her even if they can’t yet open doors. If you’re convinced that the person you’re dealing with is the next Joel Silver or George Lucas then by all means ignore everything you learned in step one and go for it. Even if they don’t get your script purchased, it could pay off down the road.

You probably will not be asked to sign a contract. Typically, contracts don’t come out until there’s money on the table. Attachments are verbal contracts that are very easy for both parties to get in and out of.

I have heard of at least one instance where a producer wanted partial ownership of a script in exchange for notes. No. Do not ever do this. Ideas are easy to have. Screenplays are hard to write. No one gets ownership of your work for simply having an idea. And, if they try it… walk away.

I had an attachment on a script and wrote five drafts in six months. Don’t be afraid to tell a producer up front that you’re only willing to do one draft, or possibly two. They may ask you for more down the road, but setting limits up front makes it harder for them to do that.

One of the biggest mistakes you can make when attaching a producer to your script is to act like a writer-for-hire. And I know this because I made that mistake. No one has paid you. You’re an independent businessperson, just like they are—which by the way is how they can ask you to work without getting paid and not run afoul of labor laws. You don’t have to do everything you’re asked to do. You can say no.

And…if a producer asks for changes you don’t agree with, it is better to say no. If your script goes into the studios and gets rejected, it should be on work you believe in and not on changes you made to please a producer.

Everyone’s path to success as a screenwriter is different. An attachment on your script might be a great decision. It’s worked out for other writers. But it is something to think long and hard about and make sure you understand what you’re getting into before you say yes.

We’d love to hear your attachment stories. Let us know how you did it and what you learned from the process.

21 Replies to "Should you rewrite for free?"