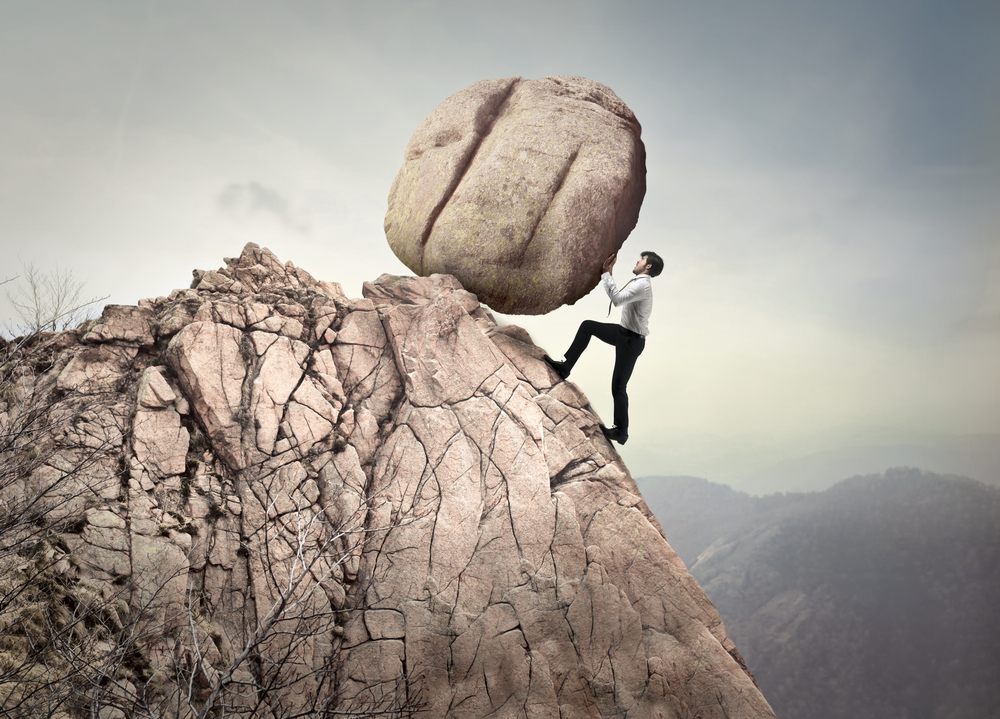 Have you ever scrapped a script idea before you finished the outline? Or have you gotten stuck in act two and put the project on “the back burner?” Have you blazed through the first draft and never looked at the project again? Hands up. I’m talking to you.

It’s tough to finish big projects. It requires time, energy and commitment over weeks, months, years. The world is constantly battling for our attention. Distracting us. It’s no surprise that we often go off the rails. It’s not just you. It’s almost everyone. It was definitely me.

I have a ton of creative interests— screenwriting, filmmaking, music, photography, poetry. For decades, I started and started. And started. But rarely finished. Dozens of songs without lyrics. Thousands of unedited photos. Screenplay outlines languishing on my hard drive.

One day my friend Steve and I were riffing on Greek myths (over too many cups of coffee). After blowing through Icarus, Medusa and a few other heavy hitters we came around to Sisyphus. As you may recall, Mr. S. angered the gods and was sentenced to an unusual punishment— pushing a giant boulder up a hill. As soon as the big rock got to the top it would roll down the other side. Sisyphus was doomed to push this monster up the hill forever. We realized this sounded a lot like life. Especially in regards to our creative endeavors.

So, we filled up the coffee cups one more time and devised the Boulder Tag Team Accountability System. Steve and I have been doing this pretty much every month for the past year and a half. We’ve written novels, penned songs, played open mics, gotten in better shape, done poetry marathons and a bunch of other cool stuff. The Boulder works. You can do it too.

No. 1 — Find a friend or partner who is ready, willing and able to commit to the Boulder.

Your friend’s goals don’t have to be the same as yours. Your friend doesn’t even have to like movies or writing. His or her mission doesn’t have to be creative. But the person does need to commit to the program. Recruit someone who you’ve watched follow through and take real action in life. You will rise or fall together, as we’ll soon see.

No. 2 — Make specific goals and a timeline.

Pick a timeline for your Boulder. I recommend starting at the beginning of a month, on Day One. Steve and I start on New Moons. Why? Because it’s a natural rhythm. And we’re kinda weird.

Each person then chooses a separate goal. Your goal should be attainable but not easy. It must be completely under your control. It must be objective. Stretch! If your best word count ever has been 1,000 a week, try for 1,500. If you generally make it to your writing group once a month, shoot for three times.

No. 3 — Determine your carrots and sticks.

Each person decides upon a reward (a carrot) and a punishment (a stick). Again, these can be different for each person. The carrot should be something that you generally wouldn’t gift to yourself. Something kind of awesome. I once chose a sweet 50mm lens for my camera.

I really love watching an episode of the The Simpsons every night. It’s like a bedtime story. One of my sticks was to put the kibosh on that for thirty days. Ouch. The stick has to hurt.

All the details for both people. Then sign it.

Emails, phone calls, texts, get-togethers. Stay in touch and encourage each other with your goals.

At the end of the term tell your partner if you succeeded or failed.

But here’s the rub. And here’s why the Boulder works. If either one of you fail, you both get your sticks. Nobody gets their carrots. The only way to win is for both of you to win. Double carrots.

This changes the dynamic substantially. While it’s a piece of cake to lie to ourselves, to let ourselves down, and to take the easy way out, it’s much more difficult if your buddy is also gonna feel the pain of your failure.

When you get into it and rock the Boulder, each push up that hill will result in a completed task that’s been difficult for you to reach before. You’ll be closer to your big goal. Closer to success!

Sisyphus will be proud.

We’d love to hear from you in the comments section. What strategies do you use to help complete your goals? What stops you? What will your first Boulder be?

Jeff Leisawitz burns with a mission—to inspire screenwriters, artists, musicians, filmmakers, entrepreneurs (and everyone else) to amp up their creativity, heal their hearts and shine in the world. Visit his site for a chance to download the first three chapters of his book, Not F*ing Around— The No Bullsh*t Guide for Getting Your Creative Dreams Off the Ground and enter for a chance to win creative coaching with Jeff to get your next project rocket fueled.