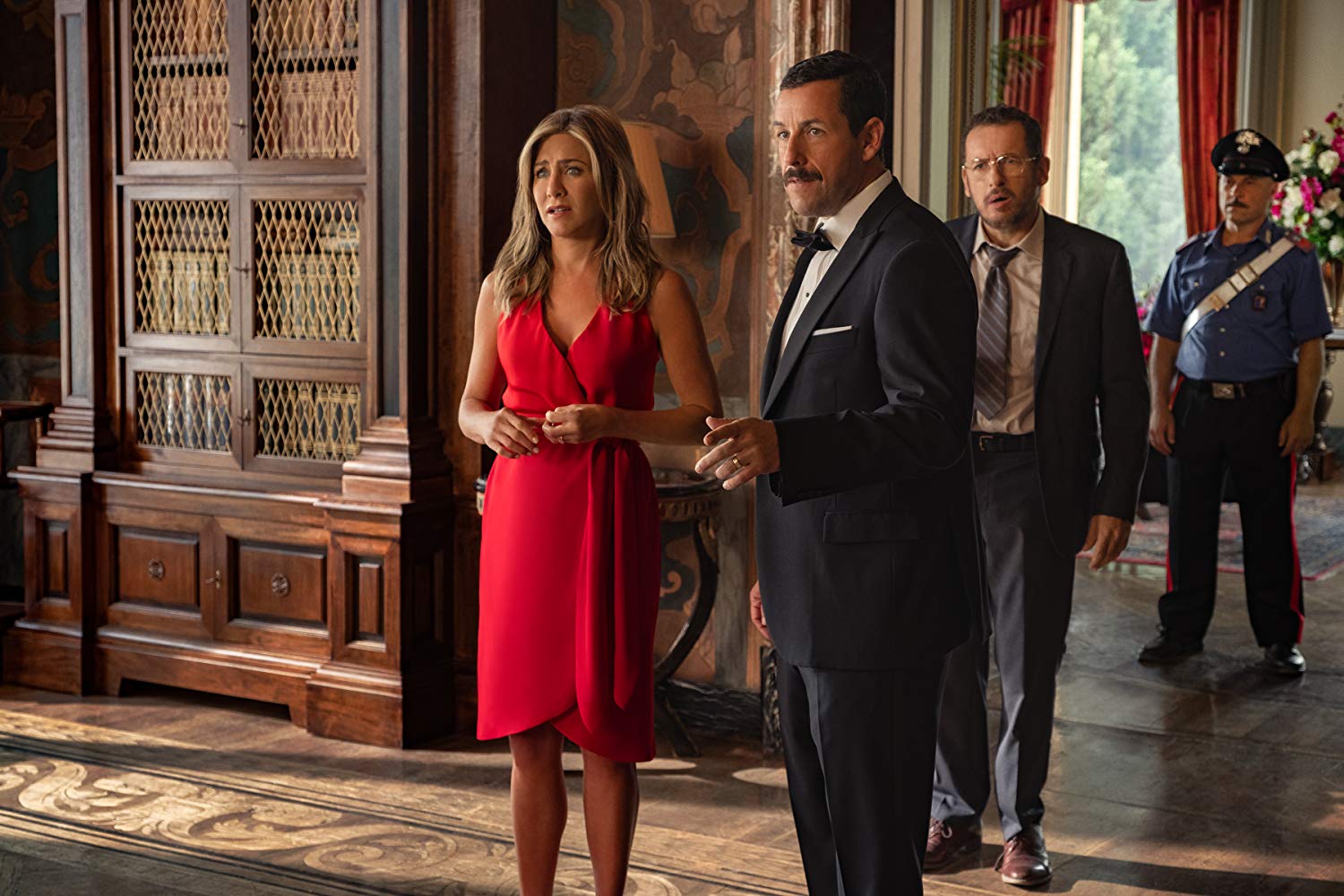 In the film, Nick (Adam Sandler), is a slightly neurotic New York cop who may not be the sharpest tool in the shed. When he takes his wife Audrey (Jennifer Anniston) on a European vacation to make good on a promise he made to her on their wedding night, they suddenly find themselves embroiled in a hilarious murder mystery.

Vanderbilt says inspiration for Murder Mystery came one night when he and some associates were talking over drinks about how much they loved murder mysteries but how these days, you can’t make a movie about a detective who gathers all the suspects together and reveals who the killer is.

“The way my brain works,” says Vanderbilt, “is that when I’m told I can’t do something, I immediately want to do it. So it came out of that. I wanted to make an old-time murder mystery but how do you update it?”

Good question. Vanderbilt’s answer was to make it a fish out of water story. He says he fell in love with the idea of a blue-collar couple crashing into an Agatha Christie mystery. The film’s director Kyle Newacheck had a similar vision and smartly populated the cast with international actors you would rightly see in an Agatha Christie movie. “It wasn’t just a bunch of comedians you’ve seen in [Adam] Sandler movies before. Steve Carell is a wonderful actor but he’s not playing the French detective… The idea was to play that part of the movie as straight as possible to add to the Agatha Christie-ness.”

Vanderbilt says the relationship between Nick and Audrey was inspired by his own marriage.

“When I first wrote the script, I had just been married a few years and really wanted to write something about marriage in a positive way. I feel like every time you see marriage depicted in movies, either they’re about to break up or one of them cheats – there’s always this horrible, dramatic thing to it. I’ve been married 14 years now and my experience is my wife and I love each other very much and we’re better when we’re working together then when we’re working apart.”

When we meet Nick and Audrey at the beginning of the movie, they’re in a bit of a rut, but it’s clear how much they love each other. That’s the key, says Vanderbilt, to writing a story about a couple. “It was always important for me to write a true two-hander. It’s not a movie about this guy named Nick who’s got this wife. It’s about these two people together. I loved that idea.”

Adam Sandler, says Vanderbilt, loved that idea too. “He really latched onto that. The script had been around a while and other actors had looked at it and not engaged with it partially because it’s a guy who fails his detective exam, who can’t shoot a gun straight. Those are not typical action-hero-y [characteristics]. That’s playing weakness, which some actors don’t want to play. He ran towards that and ran towards the idea that this man is better with this woman and this woman is better when they’re working together. We sent the script to Jen and she embraced it, too.”

With his background as an action writer, the comedy in the film could easily have gone over the top. But during the big set pieces, (i.e.: scenes on a yacht and a Grand Prix car race through the streets of Italy) how did Vanderbilt keep Nick and Audrey grounded?

“I think it was just writing from a truthful character place. I know that sounds a little bit corny, but the whole movie is so heightened – there’s a maharaja, and there’s a guy who doesn’t have a hand and wears eye patch –  there’s so much craziness to it that I always came back to the fact that if this couple doesn’t feel believable then the movie just floats off and away. They just needed to be tethered to something real at the heart of it.” One of the most successful aspects of Murder Mystery is that it keeps you guessing to the very end – something very difficult to do, but Vanderbilt does it masterfully partly due to a book he read in film school.

‘When I was coming up at USC, I remember reading Adventures in the Screen Trade by William Goldman and I think every screenwriter should read it. One of the things he talks about is reversals in scripts. A good movie should be constantly reversing itself. That doesn’t mean big plot twists, it just means it should constantly surprise you; it should be ahead of you. I think that’s a big part of a screenwriter’s job is to be sure you’re constantly freshening up stuff.”

No matter what genre you’re working in, a reversal is important but so is precision. If words are a writer’s tools, they must be able to use them effectively and succinctly.

“The art of screenwriting to me,” says Vanderbilt “is saying the most amount of stuff with the least amount of words.  That’s true of dialogue, that’s true of description. You’ve got to be Hemingway if you’re writing a screenplay – you have to use really short sentences and be as concise as you can be. I tend to write really long and then cut, cut, cut, but economy is key. White space is your friend. If you’re a reader and you crack open a script and see a lot of ink, you’re like, “Oh, no!’”

10 'Crazy Screenwriting Secrets' for Writing for the Chinese Film Market