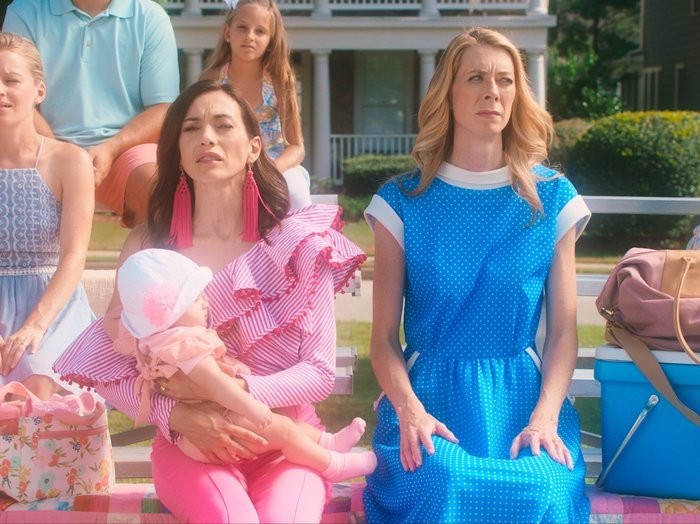 Greener Grass is a surreal comedy of manners, set in a pastel-tinted suburbia where best friends Jill  (Jocelyn DeBoer) and Lisa (Dawn Luebbe) do social acrobatics to passive-aggressively impress each other. When Jill notices that Lisa likes her baby Madison, Jill gifts the baby to Lisa who renames her Paige. Later, Lisa becomes pregnant with a soccer ball. It’s a strange, laughable world that unfortunately parallels the post-truth absurdity we’re living in today.

DeBoer and Luebbe wrote and directed the feature film based on a short of the same name they made in 2015. The two met in New York when they were doing sketch comedy for Upright Citizens Brigade. They found they had a similar kooky,  comedic sensibility.

“We were interested in finding the comedy in the mundane and writing sketches about domesticity,” says Luebbe. Both moved out to Los Angeles and decided to work on making a short film: Greener Grass.

DeBoer says the short took on a life of its own. “It had an incredible festival run. We premiered at the Clermont-Ferrand festival in France which was such an amazing experience for us because we’d never been to a film festival before.” Because they acted in the film, many locals recognized them and followed them around the town. They both wore braces in the film and teenagers would come up to them and show off their own braces, only to be disappointed when they discovered neither DeBoer and Luebbe had braces in real life. C’est la vie.

The short film also played in many American film festivals and won awards. Eventually, they sold the idea as a TV show to IFC. “We spent about six months developing the pilot with them and had the best experience working with the creative team over there,” says Luebbe.

By the end of 2017, they had a third draft of the pilot but the world was much bigger in scope than IFC was prepared for. The TV show never came to fruition. Luebbe admits they were a bit relieved.

“Working on a TV show, you have to build out six seasons of ideas and there’s no end point you can plan on. When we got to that point, we decided to turn the idea into a feature,” says Luebbe.

To finance the feature, a small miracle happened: a sole investor gave them the money. “This is someone who was a fan of our short films and our comedy work prior to that,” says DeBoer. “Of course we had a limited amount of money, but he said, ‘This is yours,’ and we had complete creative control over the project which is something we’ll be grateful for the rest of our lives.”

“We are the luckiest people on earth,” says Luebbe. No kidding.

Despite magically getting the financing, working under the constraints of a very low budget was challenging. They were going for a very specific stylized world and had 17 locations, but the biggest line item in production was for putting braces on all the actors.

DeBoer interjects, “For the materials alone! We had this incredibly accomplished special effects artist from New York living down in Georgia with us, which is another expense.”

DeBoer says the idea for adults wearing braces on already straight teeth came about in the short film. “Dawn and I were trying to shoot this really simple short film where it was going to be just the two of us, soccer moms on the bleachers. We said to each other, if one of our comedy friends [watches] this, and there’s no hard jokes happening in the first minute, we want them to know this is an unusual world.”

DeBoer and Luebbe were excited about the symbolism of the braces. “Braces are this mess when they are on your face, they’re so painful, yet they project the promise of future perfection. We thought how perfect for these suburban women,” says DeBoer.

Though they wanted to create a timeless suburbia for the film, they had their costume and production designers focus on the 1950s and 1980s because they were, “periods of economic prosperity and social conservatism when America was ‘great’ with these seeds of rebellion coming through,” says Luebbe.

Another theme in the film is identity and how often our identity is influenced by others when you seek out their approval.

“Our characters are so little tapped into what they actually want and how they actually feel. I think with Julian [Jill’s son, played by Julian Hilliard and Icee the dog] – the kids do have more of an identity than the adults. Yet, he’s constantly bombarded with this energy that who he is specifically is not right. His parents aren’t happy with him.”

Julian transforms into a dog on his father’s birthday and can be interpreted as an offering to his father. When Jill gives her baby to Lisa, it’s another example of misguided identity.

“We’re tapping into something so common, which is people making huge life decisions because of what they think will make someone else happy,” says DeBoer.

Greener Grass is solid proof that the best comedy comes from pain.

Though Leubbe and DeBoer couldn’t give me details about their next project, they admit the are fully invested in it. “One of our favorite things to do is world building. We do so much of that in the early stages of our projects,” says Leubbe.