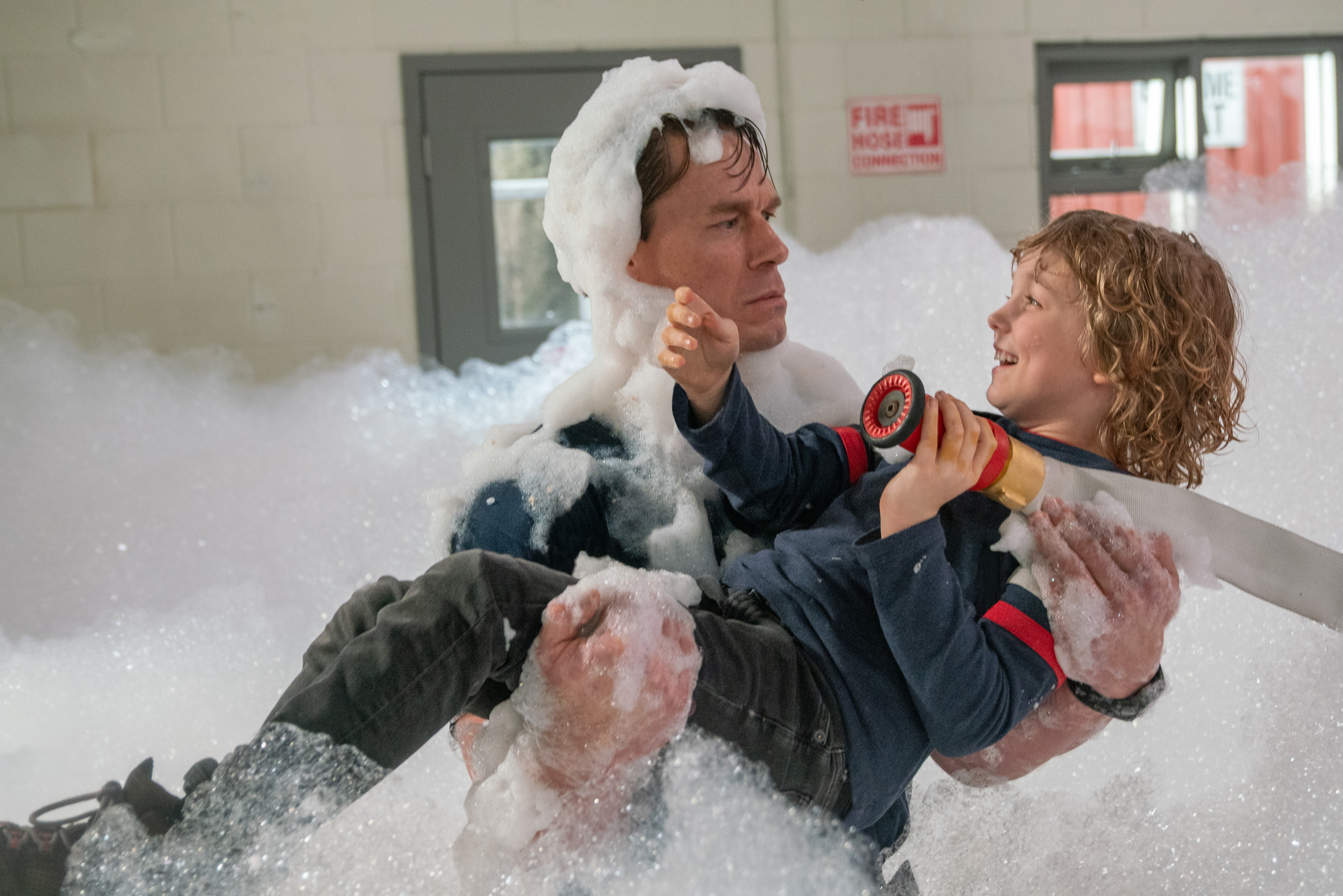 The new movie Playing with Fire is an adorable family comedy that stars John Cena, John Leguizamo and Keegan-Michael Key as a crew of rugged firefighters who meet their match when attempting to rescue three rambunctious kids. The movie is funny, heartfelt and features some of the best comedic talents around.

I sat down with writer Dan Ewen to find out what making a large, four-quadrant studio film was like. Turns out his journey has been a lot crazier than you might think.

Ewen got the idea for the story when his wife came home one night, telling him about Safe Haven laws that allow parents to legally surrender their baby to a hospital, a police station, or a fire station. Something clicked in his head. “A fireman and a baby! That’s one of those sexy fireman calendars come to life! That’s gangbusters right there.”

That was 14 years ago. Ewen was working as a substitute teacher, recruiting respondents for focus groups, he even had a three year stint as a manny (male nanny). But he hung in there. A door opened for Ewen, however, when he met producer Sean Robins (Tag, Scouts Guide to the Zombie Apocalypse). “We stayed in touch, we had an open dialogue, I’d bounce ideas off him, [he’d say] ‘That’s not right for us.’” Ewen sent the idea for Playing with Fire to Robins via email. Robins was working with Todd Garner at Broken Road. Garner had made tons of family comedies so Robins bounced the idea off of Garner. He loved it. Robins asked Ewen to come in the next day.

“That one-liner became a one-pager, that became a treatment and another treatment and then became 17 drafts of a script over the course of a decade.”

Matthew McConaughey was first attached to play the lead, but then changed his mind to tackle more serious roles. Samuel L. Jackson and Kevin James were interested after that, but nothing came of it. Ewen resigned himself to thinking Playing with Fire was burned out, especially since the movie genre of tough guys with kids (The Game Plan, The Pacifier, The Spy Next Door) was falling out of favor with studios.

But things changed when Paramount opened a new division called Paramount Players and was interested in making family films.

“I got a phone call that Paramount wanted to option my script for the price of a used Camaro.” Ewen said yes. John Cena read the script and was on board. Boom, it was happening.

Then all the rewriting began. To be clear, Ewen was not asked to do any of the rewrites. Writer Matt Lieberman took it over and proved himself to be a really nice guy by sending Ewen a note that he really liked the script and was excited to be working on it. Ewen and Lieberman share credit because so much was changed. Originally, Ewen wrote it as a Christmas movie but Paramount was planning to release it in March, so the holiday theme had to go. Obviously, that March release got moved to November so ironically, the Christmas theme didn’t need to be taken out. That’s Hollywood. Lieberman was just the first writer to make changes. It was then rewritten by two separate comedy teams. Then an entire round table of comedy writers sat together and threw out jokes. Surprisingly, Ewen understands the logic of having so many writers put in their two cents.

“People’s jobs are on the line. They’re saying this is going to be a $40 million bet. So they start to think more is better. It’s really the one area in film where too many cooks becomes the immediate drill.”

He says the script becomes less funny to everyone the more times they read it. “When’s the last time you laughed at a joke the second, third, fourth time you heard it? So I feel like there’s a vicious cycle in comedy because a joke is only funny the first time you read it.”

So how much of Ewen’s original script remains in the movie? “I don’t know if there’s a line left,” he says more with fascination than disappointment.

The movie is still very funny which is a big testament to actors like John Leguizamo and Keegan-Michael Key, who are fabulous improvisers.

“These are brilliant comedy entities that are on set and the number one thing about [director] Andy Fickman, his sets are a party. He lets them play.”

Considering Ewen’s been at the Hollywood game for over 20 years, I asked him if he had any advice based on his own mistakes.

“Never say no to work.” After being hired to write an episode of a TV show called Silk Stalkings, a TV agent offered to get him a meeting for Star Trek: The Next Generation. Ewen turned him down.

“At the time I thought, ‘I came out here for movies and that’s what I’m going to do.’ Consequently I was unemployed for the next three years of my life in the industry. If I could go back, I’d say, ‘You numbskull, what are you talking about? You found a crack in this giant wall – hit that! Hit that again and again!’”

His second piece of advice is to be open to inspiration from even the most surprising sources.

“I was working as a nanny, or manny as they like to say. My job that day was to have the kids write letters to Santa. I’m looking down at the letter to Santa with glitter and everything and I notice the ’S’ is backwards…That’s when it occurred to me how close the word Santa and Satan were.”

After work, he went to a coffee shop and started beating out a story. “If it works on a napkin, it works as a feature, the story is there. And I mapped out the story of Dear Satan, which became my first feature sale to 20th Century Fox. That came from being a manny. So you may not feel like you’re doing something relevant but that’s not always the case. Stay open even when you feel stagnant. Because that inkling is sitting there inside you and will help you create momentum.”

Playing with Fire is currently playing in theaters.