‘The Invisible Man’ courtesy of Universal.

The H. G. Wells novel, The Invisible Man, was published way back in 1897. Since then, it’s been made into numerous films, both scary and comedic: each a reflection of the time and culture in which it was made. Writer/director Leigh Whannell’s The Invisible Man is no different, taking inspiration from our current collective fears.

We meet Cecilia Kass (Elisabeth Moss) in the middle of the night as she attempts to escape from her rich, tech-entrepreneur boyfriend. Though we don’t know exactly why she’s fleeing yet, we get the sense that Cecilia’s life depends on breaking out of this seemingly stark and foreboding fortress by the sea. There is no dialogue, simply the terror on Moss’s face when she accidentally kicks a steel dogfood bowl in the dark. Terror grips the audience as we wonder if the boyfriend heard the loud clang.

Filmmaker Leigh Whannell is best known for the Saw and Insidious franchises that he’s collaborated on with producer/director James Wan. Now working without Wan, Whannell has both written and directed The Invisible Man and has made the successful transition from body horror to psychological horror. Cleverly, the film deals with a topic ripped from the headlines: the #MeToo movement. So perhaps it’s very fitting that The Invisible Man is opening just days after accused sexual predator and movie producer Harvey Weinstein was found guilty of two counts of criminal sexual assault.

Whannell says he didn’t really have any interest in making a new version of The Invisible Man. It’s a topic that came up unexpectedly during a meeting he had at Universal. Studio execs asked him, off the top of his head, how he’d tell the story. Going on instinct, Whannell says he’d tell it from the point of view of the monster’s victim.

He didn’t think too much about his “take” on the story at first. But as time went on, he became surprisingly obsessed with the idea. “I couldn’t stop imagining scenes from that film and thinking about the way I would shoot it. It chose me; I didn’t choose it.” 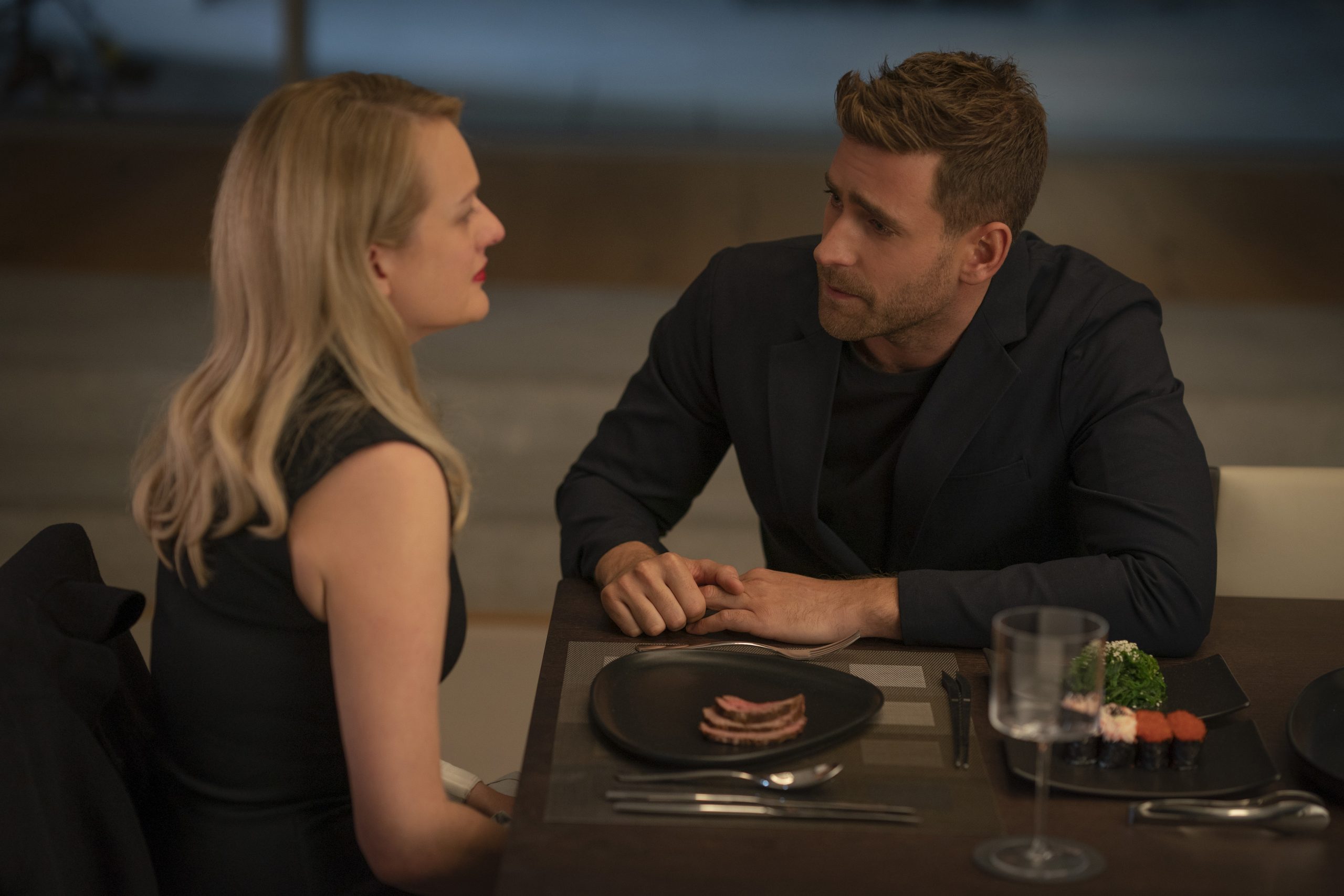 (From left) Cecilia Kass (Elisabeth Moss, back to camera) and Adrian Griffin (Oliver Jackson-Cohen) in ‘The Invisible Man,’ Photo courtesy of Universal.

The protagonist Cecilia is written as a vulnerable, yet incredibly brave woman who takes a stand against her abusive boyfriend. Yes, she starts off as a victim, but Whannell gave her tons of room to stretch, grow… and fight.

Whannell admits he loves writing roles for women. “I do find women to be really interesting characters to write. Growing up on horror films, I must say sometimes the strongest character in the film is a woman. Whether it’s Jamie Lee Curtis in Halloween, Sigorney Weaver in Alien, it doesn’t seem abnormal to a horror fan for a female to be the lead or be the strongest character. Any horror fan will tell you about this concept of the final girl, the one who lives and has to overcome. And of course, there have been horror films in decades past that have been very guilty in exploiting women – it’s been the guy attacking her in the shower and it’s a very voyeuristic, male gaze type of thing. But there’s also been this other side of empowerment, and the so-called girl’s going to fight back.”

One of the best achievements in The Invisible Man is the constrained, minimalist writing. There’s very little verbal exposition. We never learn what exactly Cecelia’s boyfriend does for a living, other than he works in optics. And the details of his controlling behavior is kept to a minimum. Instead, Whanell uses what the audience doesn’t know to build suspense and terror. He reveals Moss played a big part in helping him keep the dialogue lean.

“Certainly working with Elisabeth is a lesson in writing less. She would often say, ‘See this dialogue, this paragraph that you love? You don’t need it. I can say it all with a look.’ Which was initially painful!” Whanell says with a huge groan, admitting he spent all night writing that particular paragraph.

“But then she would prove that she could do it. After the film I felt like I learned a lot about writing less, doing less. It’s trust really, an audience’s trust. For me, initially [when I’m] writing a film there’s this need, this desire make sure everyone to understands. Clarity is key. And I think that comes from [getting] notes.” 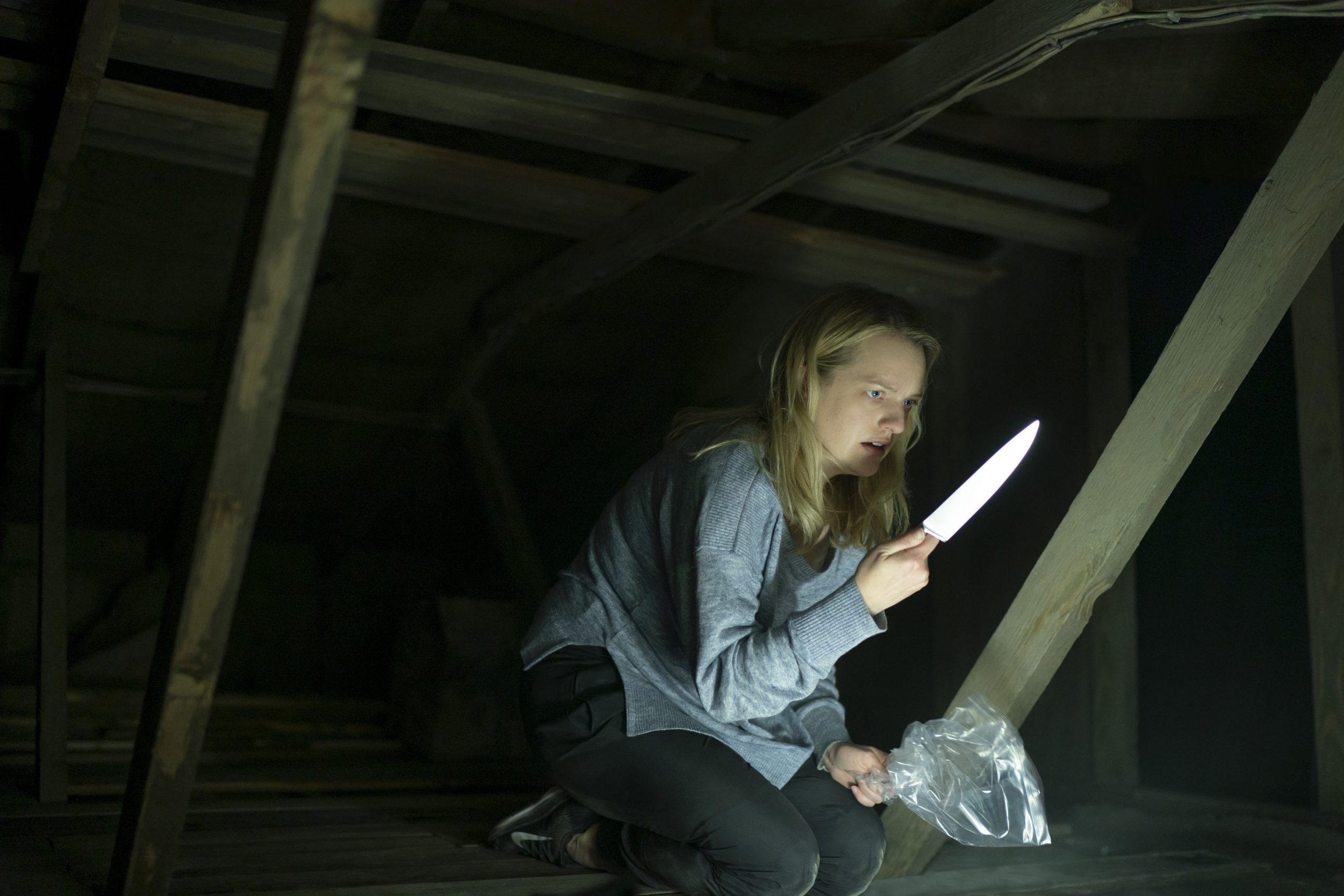 Elisabeth Moss as Cecilia Kass in ‘The Invisible Man.’ Photo courtesy of Universal.

This is where Whannell blew my mind and almost makes me never to want to get notes on anything I write ever again.

“As you know,” he says, “a screenplay and a film are two different things. A screenplay will get a lot of notes about something that wouldn’t get a note in a movie. There is so much information being transmitted in a movie, you can’t do all that on paper. They’re essentially giving you notes on a novel or a play, so [people will say], ‘I think this needs to be explained’ or ‘What’s going on here?’ So you overwrite and then you get to the set and realize none of it’s necessary. Just a look by an actress like Elisabeth Moss, or a piece of set design, sometimes even a shirt can tell you more about a character than a soliloquy of exposition. I learn more about Morgan Freeman’s character in the opening scene of Se7en just watching him do the dishes than I can listening to his fellow detectives talking about him in a really obvious, expositional way.”

Less words, more images. It’s as simple as that. Keep your antagonist mysterious and let the details unfold, particularly if you’re writing horror. But Whannell warns to keep your antagonist as cruel and dangerous as possible – for the sake of your protagonist.

“Your protagonist is only as strong as the antagonist is vicious. I remember this screenwriting adage: Put your hero up a tree and throw rocks at him. Don’t know who said it, but that’s what you want to do especially in this movie. I wanted, every step of the way, for this audience to say, ‘How much worse can this get?’ Then the next scene is so much worse! The more suffering a character has gone through, the more cathartic the victory is, right? All you can do is drag your hero through the mud and hope it resonates.”

Resonate, it does. The Invisible Man opens in theaters on Friday, Feb. 28.